At least the Cleveland Browns' offense seems to have one thing right this year, and that would be the timing of their semi-gadget plays involving wide receivers. By that, I am simply referring to reverses, end arounds, or wide receiver screens. A combination of timing, having the right personnel, and execution make these plays happen. I was a little upset by the fact that WR Joshua Cribbs only saw two snaps against the Bills, but at least he made the most out of his playing time. The first play of the drive that included RB Trent Richardson's touchdown run was a screen pass to Cribbs. Let's take a look at how things unfolded in the screenshots below.

Picture 1: Let's talk about the personnel first. The Browns are in a three-receiver set. Mohamed Massaquoi is at the top of the screen. To the bottom of the screen, Greg Little is in the slot, and Joshua Cribbs is on the outside. Considering how little playing time Cribbs gets on offense, I'm not too sure why the Bills' defense doesn't know to key in on him. Maybe they are confused by the hair and think he's Travis Benjamin. The running back is Trent Richardson, and the tight end to the right of Brandon Weeden is Benjamin Watson. For this play, the only personnel we're really concerned about are the guys on the left of the offensive formation. 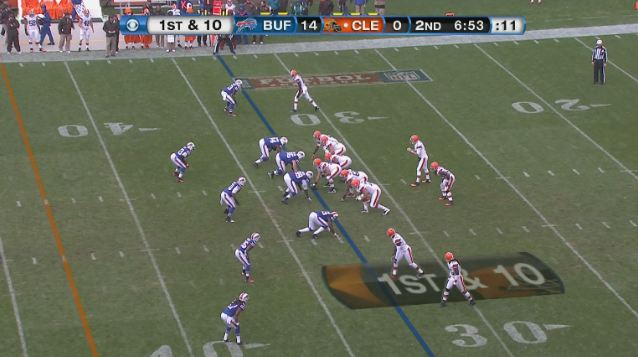 Picture 2: There is no fake. Right after the snap, Brandon Weeden gets ready to throw the ball to Joshua Cribbs for a wide receiver screen. Greg Little immediately looks to block rookie CB Stephon Gilmore on the outside. Joe Thomas doesn't even try to block the defensive end; he jets out to target the nickel corner, Justin Rogers. Alex Mack also creeps out a little bit to the left side. 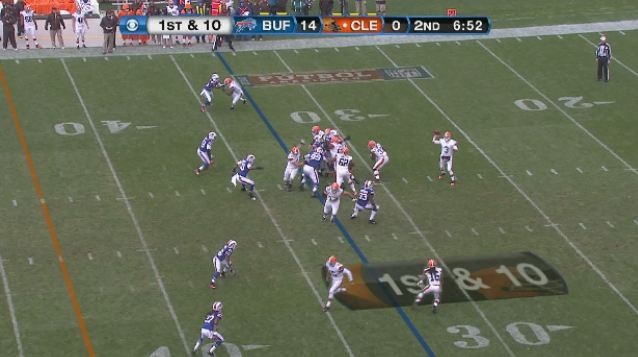 Picture 3: You can see everyone hitting their blocks here. Even though it wasn't really important to the success of this play, Alex Mack does the best he can to slow down LB Nick Barnett a little bit. Joe Thomas locks on to Rogers and blocks him about ten yards down the field. Little has already cut out Gilmore on the outside, which is the key to springing Cribbs. 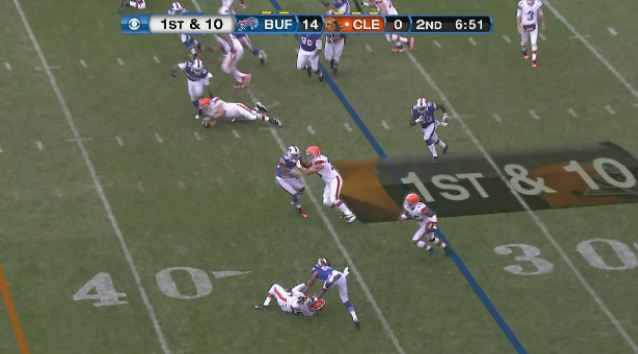 Picture 4: It is now a punt return for Joshua Cribbs, as announcers often say. Cribbs ends up getting 24 yards on the play, but there are two things that make you wonder if he could have gotten even more. First off, the guy right under the CLE text on the scoreboard is Nick Barnett. Because Alex Mack didn't get enough of him on the block in the previous screenshot, Barnett is able to take down Cribbs from behind. If Mack takes out Barnett completely, Cribbs might have gotten a couple more yards.

The bigger question here is this: why didn't Cribbs just take this to the outside? The screenshot below is freeze framed right when he cuts back to the inside. A frame earlier (not shown), he could have gone left or right. The defender in front of him, S Jarius Byrd, is pretty flat footed. When Cribbs comes to the inside, you can see the other safety, George Wilson, coming from the other side of the field. As far as I know, the Bills didn't have any defenders beyond Byrd up the left sideline. With Cribbs' ability to stiff arm defenders, I would love to see the outcome of this play if he stays outside next time. 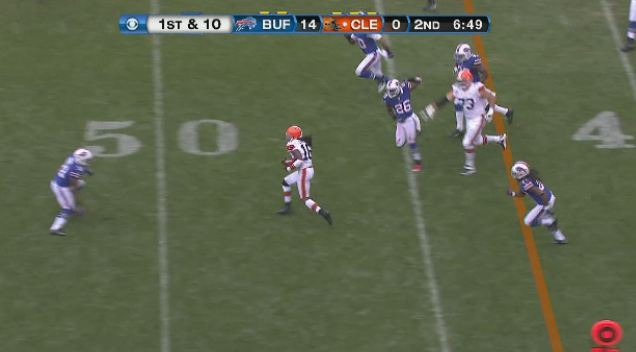 Do you think the Browns should utilize Cribbs more on offense, or should the youngsters still be developed as much as possible?