The Evolution of Dawgs By Nature, from 2006 to Present

We take a look back at some issues the technical team have been working on in SB Nation United, and the history of logos and layouts at Dawgs By Nature since 2006.

Share All sharing options for: The Evolution of Dawgs By Nature, from 2006 to Present

To the Dawgs By Nature faithful:

I would like to thank everyone for their feedback on the new layout of the site. As most of you know, we are part of a much larger network called "SB Nation." Some of you don't care about the other communities and are only here because you want to talk about the Browns, while others are actually more active in other communities, whether that be Let's Go Tribe, Fear the Sword, Athletics Nation, Red Reporter, etc. While SB Nation United is about making things more uniform, every site will definitely still have its own unique flavor. In other words, the Joe Thomas memes aren't going to stop. We aren't going to forget about mooncamping. With new features like Matt's podcast, the ability to feature higher quality content more prominently so you don't miss out on it, and more, we are only going to continue to grow.

For those who don't know, SB Nation has a dedicated technical team that is listening to all of the feedback provided by site managers and users. This morning, they sent us some information on what they've been working on, and what else is on their agenda:

Other Things Being Worked On:

The tech team is continuing their non-stop tweaks behind the scenes. Please continue to send your own requests/feedback/bugs to support@sbnation.com

Comparing the Current and Previous Versions of Dawgs By Nature

This also seems like a fitting time to take a look back at the different versions of Dawgs By Nature, as well as the potential logos we could have used for United. 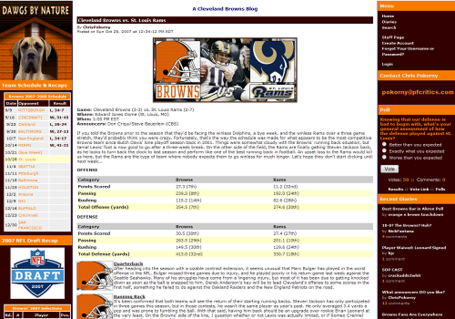 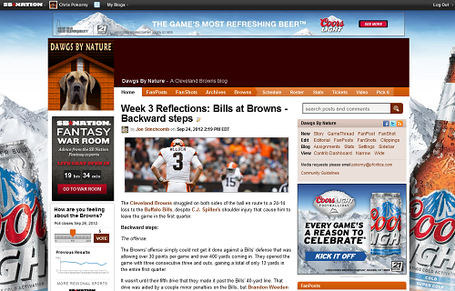 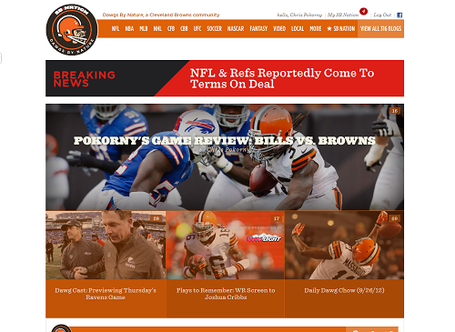 Back in April 2012, each of the lead bloggers was tasked with filling out a survey on what they would like their new logo to look like. SB Nation hired a designer for this project to revamp all 300+ logos, which was certainly a massive undertaking. Here is a summary of what I told the network about my preference for the logo:

What do you like about your current mark (meaning the old logo):

Chris: "I have always loved DBN's mark, so I guess it would be appropriate to say I like "everything." I like the fact that it incorporated a dog house with the team colors, and then an actual non-cartoonish dog inside. There are so many variations of the Browns' logo, but the current mark is different than all of them while still clearly conveying, 'this is the Cleveland Browns.'"

What are your team colors?

Chris: "Orange and Brown. White is appropriate too -- not as a dominant color, but as necessary (i.e. like how the white stripe is on the dog house on the current site logo)."

List any interesting or important elements (mascots, landmarks, sport/team-specific inside info) to be included.

Chris: "I don't think landmarks would be good, because no landmark really represents the Browns. In terms of being team specific, I thought a unique spin on having a dog in a dog house was good. Our popular mascots are more of the cartoonish dogs, like Chomps or CB. One thing I will say: please don't go overly plain. I know the Browns' helmets are unique in that they are just a color, but I don't think the logo should treat the Browns like some throwback team and make it look old-style/plain. Our team also has an alternate elf logo that they sometimes use. I don't think this is widely known enough by people outside of Cleveland, so I wouldn't prefer it. "

If there was one object that represented your blog, what would it be?

Chris: "A dog. It can't just be a dog, though, either it or the objects around it need to have an orange/brown theme to it."

Here is the old logo for reference:

A few weeks after I provided my feedback, I got my first draft:

The main gripe I had was the grey on the dog. Inside, I also didn't particularly care for the dog, but I didn't know how to describe a potential change. I suggested that the color at least be changed, and it was:

Over the next few months, there must have been some tweaking, and I am thrilled that there was. When bloggers first learned about our new logos (around the time we revealed them to you), I was presented with this much-improved version:

Ahh! The grey is back! No worries, as it was fixed a short while later:

Ta-da! A thing of beauty, isn't it? We'll have some merchandising ideas with this logo in the future.

Thanks to everyone for being patient and responding positively with the transition. There are some other blogs (i.e. Mile High Report) that go way over-the-top with their reactions, but the overall response across the network has been great, and I can already see users getting used to it. Please feel free to share any additional feedback in this thread, or just talk about your appreciation/legacy at DBN in general.