Share All sharing options for: Joe Thomas Named a Finalist for NFL's Walter Payton Man of the Year Award

Cleveland Browns fans who watched the halftime show of Sunday's AFC Championship game between the Ravens and the Patriots had to crack a smile when they saw that left tackle Joe Thomas was named a finalist for the NFL's Walter Payton Man of the Year Award. Thomas is one of three finalists, along with the Cardinals' Larry Fitzgerald and the Cowboys' Jason Witten. 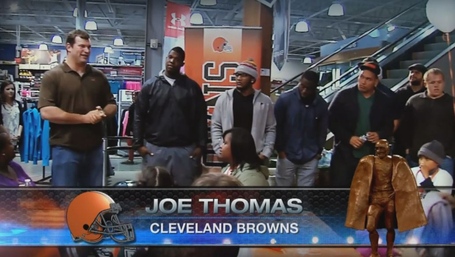 "Thomas and his wife Annie help fund the Kids in Need Resource Center, as well as national and local USO campaigns to go along with other causes like the Make-A-Wish Foundation and local food bank," described CBS Sports anchor James Brown when announcing Thomas as a finalist.

Thomas was honored to be a finalist:

"I am honored and truly humbled to be recognized as a finalist for this award," Thomas said. "Walter Payton wasn’t just a Hall-of-Fame player, he was also one of the best people that ever played in the NFL and made a difference in so many lives. Giving back is something that is extremely important and the Cleveland community is very special to me."

By being the nominee for the Browns, Thomas automatically received a $1,000 donation to the charity of his choice. He received an additional $5,000 donation in his name by making the final three. If he is named the winner, he will receive an additional $20,000 for his charity. The winner will be announced at the 2nd Annual NFL Honors show on February 2nd, from 9:00 PM to 11:00 PM ET on CBS.