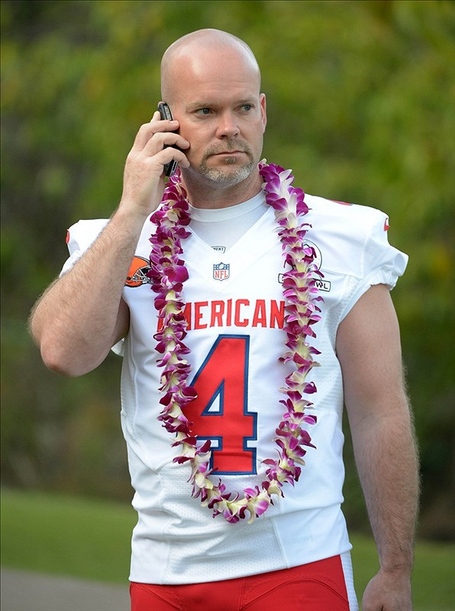 Browns K Phil Dawson taking a phone call as he lines up to kick a 50-yarder. Kirby Lee-USA TODAY Sports

Who is ready for the 2013 NFL Pro Bowl? The game will kick off on Sunday, January 27th, at 7:00 PM ET on NBC. As you can see in the photograph above, the Cleveland Browns will be represented by LT Joe Thomas, K Phil Dawson, and KR Joshua Cribbs. (Cribbs also posted a team picture to his instagram account)

Thomas and Dawson were named to the Pro Bowl initially, but Cribbs got an invitation due to the Baltimore Ravens making the Super Bowl. The Ravens' Jacoby Jones was originally the kick and punt returner, but teams competing in the Super Bowl cannot have their players participate in the Pro Bowl.

Thankfully, none of the Browns decided to venture out to a certain nightclub in Honolulu. Redskins left tackle Trent Williams was involved in a fight Friday night that saw him get smashed over the head with a bottle (which required seven stitches) and tasered. Williams will not play in the Pro Bowl and was replaced by the Vikings' Matt Kalil (which illustrates the faults of the Pro Bowl).

The Pro Bowl game itself is admittedly one of the most boring events you'll ever see; it doesn't hold a candle to paint drying. However, we don't know what the future of the Pro Bowl holds, so let's do our annual buildup of getting excited to see this game at least one more time -- after all, this could be the last time we see Dawson and/or Cribbs in a Browns uniform.

Our open thread for the Pro Bowl will go live at about 5:30 PM ET on Sunday.