Share All sharing options for: Super Bowl 2013: 49ers Will Win Due to Jim Harbaugh's Decision to Start Colin Kaepernick

The San Francisco 49ers were on the cusp of making the Super Bowl last season, but they fell short after losing to the New York Giants. This year, things were different. They steamrolled the Green Bay Packers in their first playoff game, and they finished with a strong second half in the NFC Championship to defeat the top-seeded Atlanta Falcons. Now, they are set to do battle with the Baltimore Ravens in Super Bowl XLVII, and there's one big reason why San Francisco will emerge victorious.

Why the 49ers Will Win Super Bowl XLVII

Jim Harbaugh's Decision to Start Colin Kaepernick: In what was a largely unprecedented move, head coach Jim Harbaugh pulled the string on starting quarterback Alex Smith in Week 11. The move was first made because of a concussion Smith had suffered. Smith had thrown 13 touchdowns and 5 interceptions for a QB rating of 104.1. Why make the switch away from the guy who was on pace to lead you to the NFC Championship for two years in a row? Because of Colin Kaepernick. 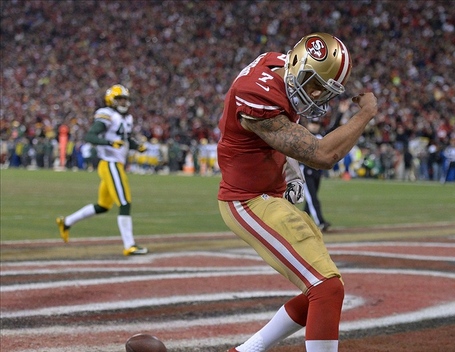 49ers QB Colin Kaepernick broke an NFL record for rushing yards for a quarterback against the Packers a few weeks ago. Credit: Kirby Lee-USA TODAY Sports

Initially, I thought it was a big mistake. I was very intrigued by Kaepernick's abilities, but it seemed like too much of a risk. The balance between Smith and Kaepernick seemed to be working well, and I worried what would happen if the second-year quarterback hit a bump in the road. Instead, behind the brilliant offensive schemes that Harbaugh and offensive coordinator Greg Roman have deployed, Kaepernick became one of, if not the most dangerous quarterback in the NFL.

Not only does Kaepernick possess one of the best fastballs in all of football, his running ability is unlike any other, and it's not because he has to run. He picked his times wisely against the Packers a few weeks ago and broke an NFL record for quarterback by running 16 times for 181 yards and 2 touchdowns.

Last week against the Falcons, he was more than happy to fool the Falcons into thinking he could run; he only took off 2 times for 21 yards. Instead, he watched the likes of Frank Gore and LaMichael James go off for 124 yards and three touchdowns. Is there anyone on the Ravens who can catch Kaepernick if he does take off for the races? Niners Nation broke it down:

[The Ravens'] four best players at each level of the defensive infrastructure - Haloti Ngata (29), Ray Lewis (37), Terrell Suggs (30) and Ed Reed (34) - are an average age of 32.5. Only Ngata is under thirty years of age. There is a lot of wear and tear within this group, and it may be difficult for them to run down the 6'5", 230-pound sprinter in Kaepernick.

Then there is the secondary:

So, here is the burning question: What happens when Colin Kaepernick gets them in a foot race?

As for the safeties - or the last line of defense - Reed's 4.57 was clocked over a decade ago. The future Hall of Fame safety has had a torn labrum, banged up ribs and a neck injury since then. Meanwhile, Pollard is known as a punishing hitter rather than a speedy coverage back. At first glance, they don't have the physical capacity or tools to catch Kaepernick in open space.

The Ravens cornerbacks, Graham and Smith, are the only two capable of hanging with Kaepernick. Fortunately for the 49ers, their wide receivers, especially Michael Crabtree and Randy Moss, have done a tremendous job blocking in the run game.

Most coaches probably would not have been able to make the switch from Smith to Kaepernick, but Harbaugh was able to due to how highly he thought of Kaepernick when he drafted him: 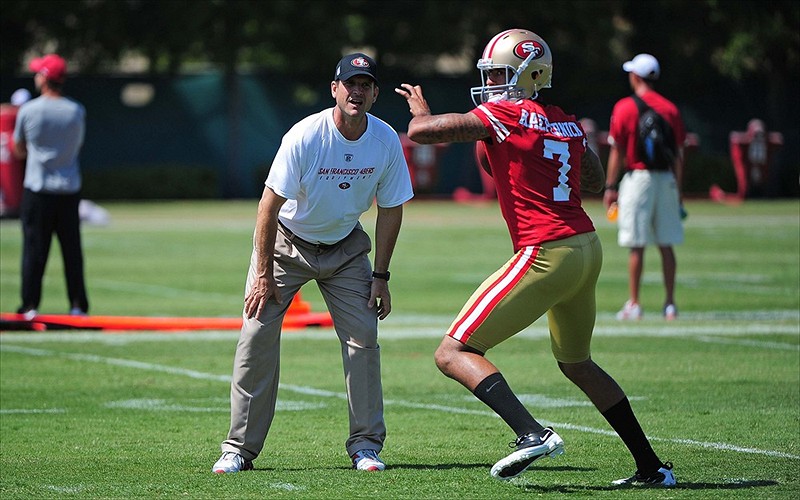 Jim Harbaugh called Colin Kaepernick "the best football player" in the 2011 NFL Draft. If the 49ers beat the Ravens this Sunday, he might be right. Credit: Kyle Terada-USA TODAY Sports

"Kaepernick is the best football player in the draft" -Jim Harbaugh, back in April 2011

Think about that -- the 49ers took Aldon Smith in the first round of that draft, and Harbaugh had to wait around nervously knowing that he was risking not getting the "best player in the draft" in Kaepernick. He knew it, but he was hoping the rest of the league didn't. It turns out he was right. He was the sixth quarterback taken at No. 36 overall, just one pick after the Bengals selected Andy Dalton as the new leader of their franchise.

Looking back, the success of [Alex] Smith was probably an unexpected roadblock for Harbaugh, who was anxious to hand over the reigns to Kaepernick. He played the situation right -- he did it at a time when the rest of his football team was clicking on all cylinders, and when a forced injury to Smith would give Kaepernick a live audition to run with the opportunity. That's exactly what he did, and after making just 14 starts, he finds himself ready to win a Super Bowl.

On Friday, I will have a counter-piece talking about the Ravens, before having my final prediction and preview on Saturday.