The Cleveland Browns' top head coaching candidate Chip Kelly is no stranger to success on offense. He has skyrocketed up NFL wishlists because of his ability to score a whole lot of points at the University of Oregon.

The Xs and Os behind Kelly's brand of offense have been broken down elsewhere, and they undoubtedly work both on paper and in the college ranks. Philosophically, he wants to spread the field in order to run the ball. To do this, he utilizes a variety of tactics, but Kelly's bread and butter are the zone running plays with the quarterback optioning a backside defensive player: 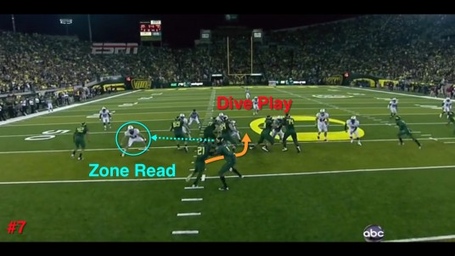 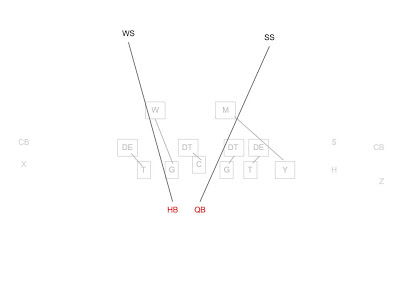 In offenses where the quarterback is not a threat to run, the defense then has two men free to tackle the running back. Kelly uses the quarterback to option one of those players, effectually blocking him: 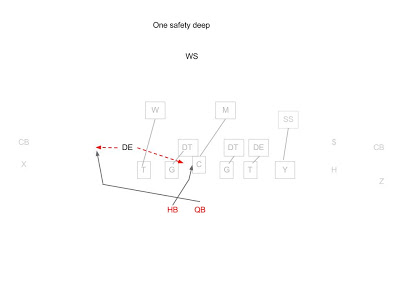 If the defense brings both the running back and the quarterback's counterparts down into the box, they have an extra player left and can arithmetically stop the run. But in doing so, they vacate the deep middle of the field and leave their cornerbacks with no safety help. 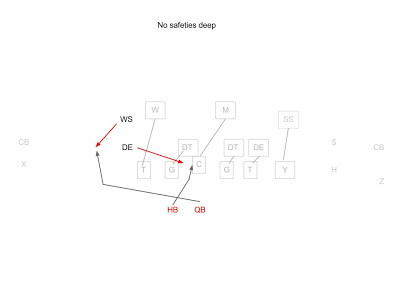 Because Kelly is able to recruit lots of speedy players, if he can get them in space they can often score from anywhere on the field. But at Oregon, speed isn't merely about running fast. As Chris Brown explains:

"Kelly's choice of a no-huddle spread offense drips from every corner of the impressive practice facilities in Eugene. Oregon does not run a no-huddle offense so much as they are a no-huddle program."

They practice at a pace most NFL coaches can't believe, they don't huddle and are capable of running play after play quickly (though they don't ALWAYS operate at that pace). They recruit fast receivers, fast quarterbacks, fast running backs, and fast linemen. Everything at Oreon is about speed on speed on speed.

Translating to the NFL

If he decides to make the jump to the NFL, Kelly will be faced with translating his offense into a league that is much different than the NCAA. His offense couldn't simply be picked up and plopped in the NFL. Below, I have outlined a few obstacles that I think Kelly will have to overcome if/when he makes the transition to "the league".

This is the easiest adjustment I think that Chip Kelly would have to make. We've all heard stories of NFL coaches who sleep at their facility trying to figure out how to get the edge on their opponent. Playbooks are voluminous in the NFL and they need to be (though they probably don't need to be quite so thick). Players are more experienced, coaches don't have to recruit during the season, and they all are less likely to be caught by surprise.

Kelly has some great adjustments already in his scheme at Oregon, but NFL coaches will know about them. They will come up with ways to cheat defenders to stop what Kelly wants to do. And when they do, Kelly will have to be ready. But a creative, intelligent coach like Kelly would probably welcome the challenge of having to create a few new plays.

Lack of incentive/ability to be different

Weird offenses win in college football. Whether it is the Air Raid brand of pass-happy coaches or Paul Johnson's wishbone attack, being weird has worked in college. And why wouldn't a school like Oregon (who wasn't exactly a traditional power) experiment? When the Ohio States, Alabamas, and USCs of the world can take all of the elite talent, small schools need to do something different to win.

The NFL has much more parity and is rightfully branded an "any given Sunday" league. Bad NFL teams can reasonably sit around and wait for their Andrew Luck, while bad college programs are only going to get worse if they sit around waiting for their savior.

Man hours and speed of adaptation

The other truism about the NFL is that it is a copycat league. And with so much manpower available to NFL teams schemes and adjustments are stolen and implemented much quicker than in college.

After a few weeks, the NFL wildcat was effective only insofar as it made defenses prepare for one extra wrinkle. But it has taken years for college teams to be able to adjust to "the" spread, the option, and Air Raid offenses. Most teams still can't stop Chip Kelly.

And while being the oddball in college has created a new set of contenders, where did the wildcat* get the Dolphins? Being different helps in the NFL, but it won't do the equivalent of turning Texas Tech into a national power.

(*keep in mind that Kelly's system is entirely sound and it works even when the opposing defense is ready, unlike the wildcat.)

Player speed and "shrinking the field"

Some have argued hat NFL defenses are merely too fast for "college" offenses. And I only half buy what they are selling. On the one hand, fast defenses clearly downgrade the feasibility of some types of plays. The Lombardi Sweep became less effective once defenses were fast enough to string the play to the sideline. Kids reverse field and succeed from time to time in high school and college, whereas it almost never works in the NFL. Additionally, the human limit of speed in movements such as ball fakes and throws to quick WR screeens means that faster players can make up more ground against these tactics in the pros.

But any argument here is trumped by the fact that we are already seeing these plays work in the NFL. Good offense is about faking and holding a defense accountable between two mutually exclusive options, and Kelly's offense does that.

If there is one reason Kelly's scheme won't work in the NFL, I believe this is it.

Simply put, quarterbacks get hurt when they run in the NFL. Vince Young, Mike Vick, Robert Griffin III, Steve Young, Tim Tebow, Randall Cunningham, if they have been runners, they have gotten hurt. To my knowledge, Cam Newton is the only one who has started a full year and hasn't (yet) been injured while running the option in the modern NFL era.

Sure, guys like Tom Brady and Peyton Manning have also suffered gruesome injuries and no one mistook them for track champions. But running an option system exposes quarterbacks to more hits in a league where even running backs can't withstand more than 370 carries. RG3 has carried the ball 118 times this year, while the 16th highest carry total for a QB belongs to Matt Stafford, who has only run 35 times. Kaepernick has racked up over 60 carries in less than half a season's worth of action.

While I don't have any actual numbers, you have to theorize that taking an extra 90 hits per year isn't good for your quarterback--and keep in mind that Washington's offense doesn't even completely revolve around the option. You could easily see that number double if a team ran the option full time.

Looking in to the crystal ball

In the end, I think the need to protect the quarterback will cause the biggest shift in Kelly's playcalling if he makes the jump to the NFL. His system at Oregon revolves around the threat of a QB run. The option can exist as a part of an NFL system, but without a two-quarterback rotation or one of the most freakiest of freak athletes that has ever walked the earth it can't be anyone's bread and butter.

Offenses don't succeed because of style. It isn't the fact that Kelly decided to use a spread formation read option play that has him succeeding in college. Hundreds of other teams have run that play and haven't seen that kind of success. Kelly has seen success because he is a good teacher and an innovator, and because his entire program is thoroughly set up to accomplish easily identifiable goals: spread the field, run the ball, play with speed in every sense of the word.

If he can keep that type of systematic mentality and find new ways for his organization's cumulative efforts to manifest themselves on the field, Kelly will continue to see success in the pros.