The Browns came in to Sunday riding high on a 3-game win streak. The wind was quickly taken right out of their sails as another poor second half lead to their demise. Time for Miller's take.

The Browns came into yesterday with a 3-game win streak. I was feeling good, excited for another shot at a W. My excitement lasted exactly 1 half yesterday, as a 17-7 lead evaporated into an L, and ended with multiple items being thrown on my part. Cleveland looked poised to nab a 4th win in a row, but an awful second half cost us that chance.

Let's take a look at what happened. 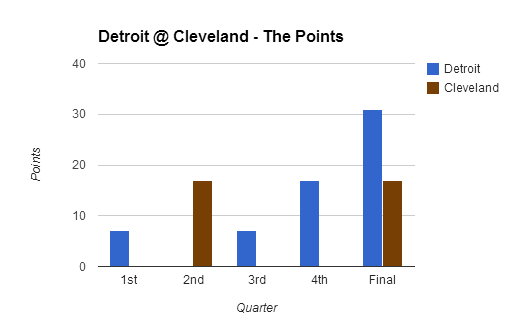 The Browns started their first drive at their own 5-yard line and actually got a nice burst from Willis McGahee for 12 yards on 1st down. The Browns first drive would quickly fizzle out however and would be forced to punt inside their own 20.

The Lions got the ball with good field position and would take advantage of back-to-back Joe Haden pass interference penalties that set them up at the Cleveland 1-yard line. Some guy named Joseph Fauria then caught his first of three (!!!) TDs that gave Detroit an early 7-0 lead.

The Browns would get the ball back towards the end of the 1st quarter. On the first play the Browns got the ball in the hands of their speedster, Travis Benjamin. The play was perfectly executed and Benjamin almost took it to the house, but instead settled for a big 45-yard gain. Cleveland would carry that momentum over into the 2nd quarter and would cap the drive off with a Brandon Weeden TD pass to a wide-open Chris Ogbonnaya. That would tie the game at 7-7.

Cleveland was feeling even better after Detroit came out and tried to make something happen, but ultimately punted after two nice pass breakups from Chris Owens and Joe Haden and an incomplete pass. Detroit's final drive of the 1st half would be 3 incomplete passes, 0 yards, 26 seconds elapsed.

The Browns would then get the ball with 50 seconds to play in the half.  A neutral zone infraction gave the Browns a short 1st down & 5, and an Ogbonnaya 8-yard rush gave the Browns a first down at their own 39. After a timeout, Weeden connected with Josh Gordon for 36 yards that put them in Detroit territory. The Browns would settle for a Billy Cundiff 40-yard field goal to take a 17-7 halftime lead.

All that momentum the Browns had heading into the locker room at the half quickly disappeared. After a false start to open the second half, the Browns went three-and-out.

This is when the Reggie Bush Show came alive. On Detroit's first drive of the second half, Bush had 2 rushes for 43 yards and a catch for 18 yards and the TD. The Bush TD would pull the Lions within a field goal, but unfortunately for the Browns, Bush was just getting started.

Cleveland would go quickly three-and-out on their ensuing possession. Detroit would then put together a drive that got them near the Browns' redzone, but an interception by Tashaun Gipson in the endzone and returned for 35 yards, quickly gave Cleveland the momentum right back.

Again, that momentum was short lived. The Browns would go 3 plays for -9 yards on the ensuing drive, that would end the 3rd quarter. Cleveland would head into the 4th quarter up 17-14.

Matthew Stafford again found Fauria for a 23-yard TD early in the 4th quarter to give Detroit their first lead since the 1st quarter. Detroit would go up 21-17.

On the next drive is when things started to really unravel. Weeden connected with Josh Gordon to open the drive for 14 yards. An intentional grounding penalty, followed by a false start penalty, set the Browns up with 2nd and 25 from their own 19 yard line. Weeden would make a good throw and Greg Little made a great catch for what appeared to be a first down. The call on the field was incomplete, HC Rob Chudzinski challenged the ruling on the field, but the refs didn't see enough evidence to overturn the call. I saw all the angles they had, and personally thought it was a catch, however I can see why they didn't have "indisputable evidence" to overturn the call. Mike Pereira, former VP of Officiating for the NFL had this to say on Twitter:

Does the right foot hit in CLE? I think it's a catch... reviewing now.

Upon further review, i think the left calf might have been OOB before the foot heel touched. Not indisputable enough to reverse.

Tough break for the Browns.

After another Browns punt, the Lions had good field position again, and capitalized on a David Akers 51-yard field goal to put the Lions ahead 24-17.

The Browns had a shot to make it a game, just down a touchdown with the ball, and almost 6 minutes to play. What happened next will be talked about ad nauseam for weeks. Simply put, Brandon Weeden made one of the worst passes, ever. The pass was intercepted after he tried to underhand toss it to Chris Ogbonnaya while being sacked. Hat tip to WFNY who did a great job of organizing the Twitter reactions to the interception. At this point I was lost in the moment, threw the remote and was without words (at least words that can be repeated publicly).

The Lions were faced with a 3rd and 3 on the ensuing possession. Cleveland needed a stop to at least try and drum up another chance at a game-tying drive. Cleveland got that stop by way of Buster Skrine defending Calvin Johnson, but it was negated by a roughing the passer penalty on Queintin Groves [throws hat at TV]. I'm never one to blame the refs for costing the game, and obviously that call didn't cost Cleveland the game, but it did cost them a shot at the game. That was a flat out bad call. Back to Pereira's Twitter for thoughts on that call...

Detroit would tack on another Fauria TD to end all doubt, and would go on to win 31-17. 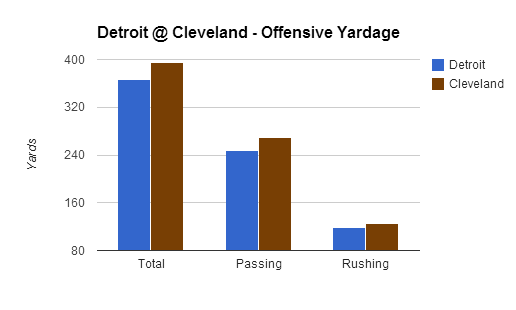 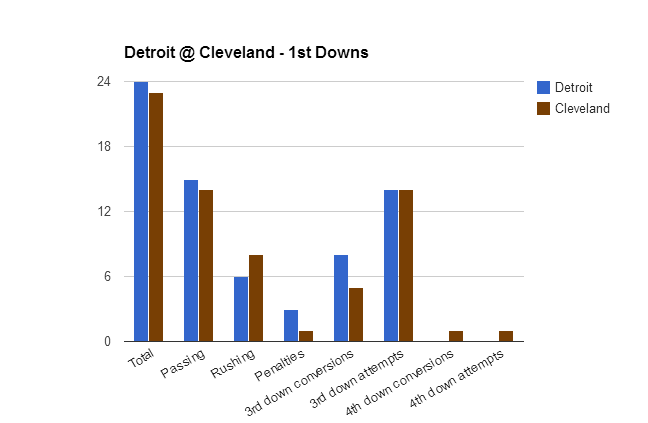 If the Browns just played 1 half of football each week, they'd be 6-0 right now. The problem with that, is that there's 2 halves in a football game. The Browns have taken a lead into halftime every game this season. The issue is they've finished with the lead (and the W) only 50% of the time.

The Browns are outscoring opponents 78-43 in the first half of games this season. On the contrary, in the second half of games Cleveland is being outscored 40-82. That's almost mirror images of one another.

I can't say for certain what the issues are; if it's game planning, if it's coaching, if it's luck, if we're cursed, I don't know. What I can say for certain, is that if this team wants to win more ball games, they have to be better in the second half.

Cleveland now has to get ready to hit the road for two straight in Green Bay and then Kansas City. This is a tough stretch for this young team, it'll be interesting to see how they respond. The Packers have a formidable offense that took a hit Sunday as James Jones and Randall Cobb both went down with injuries. It'll be worth watching to see if/how Cobb and Jones practice this week. Cleveland will have to sure up it's defense either way to really take a run at the Pack.