According to several media sources, including members of the Cleveland beat, the Browns have officially announced that they were awarded Jordan Poyer off waivers. To make room for Poyer, the Browns have reportedly cut Julian Posey.

Jordan Poyer was claimed by the Browns, I'm told

While I can't be certain exactly what the immediate plans are for Poyer in Cleveland, he does provide additional size, instincts, and depth to develop as a part of an already young Browns secondary. Poyer doesn't have great speed or length but could be somebody the Browns are looking at to develop as a Safety or for competition in the slot.

According to Jeff Risdon -

"Jordan Poyer brings a lot of real positive to the table. He is an instinctive, scheme-diverse corner with good ball skills and a developed football IQ. Poyer has shown he can play zone schemes as the boundary corner but also press in the slot with equal effectiveness."

In a way, the acquisition could be considered an extension of the 2013 draft class in that the Browns were able to land a young player who I thought was a mid-round value last year at the expense of a guy ( Julian Posey ) who probably wasn't going to see the field much or contribute much outside of special teams.

For whatever reasons though, Poyer fell in the draft and then was recently cut by the Eagles on account of injuries and up and down performance. That being said, the Browns have given Poyer a roster spot and a chance to show them what he can do with it. While I don't think they landed a starter, or even a guy that is going to challenge immediately this year, Poyer could be a guy that the Browns picked up now to groom with the hopes he'll blossom later. Keep in mind that defensive back is one of the hardest positions to transition to the NFL from college and from the link above, it seems as though his up and down performance along with injuries made the cut necessary for the Eagles but it also looks as though the Eagles fans and writers were hoping he made it back to the practice squad and developed as a safety.

Poyer's only NFL experience was during the first game of the 2013 season vs. the Redskins and those ProFootballFocus stats are below. I have also included some college game film and a post draft interview for your reference. 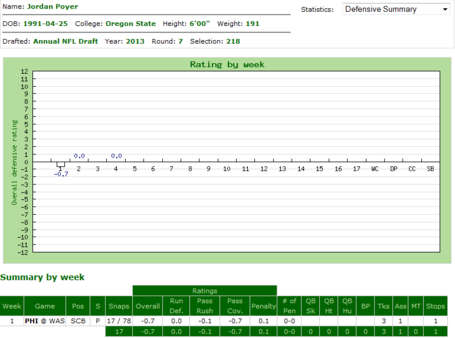