Cleveland got handled pretty easily by the Packers on Sunday. Nothing seemed to be clicking for the Browns as they struggled to move the ball on offense, and struggled to stop the Pack on defense. I'll take a look at why we're looking at our 2nd straight loss.

The Cleveland Browns were slipping and sliding all over Lambeau Field Sunday, and were handed a punishing 31-13 loss at the hands of the Green Bay Packers. It was a game in which I'll look back in a few weeks as the game where I never really felt a part of the game. For many reasons (we'll get into in a sec), I just didn't see the Browns standing their ground in this one. I know that's bad to say, but from the moment they kicked off, did we really think we stood a chance? Unfortunately my answer is no, so now let's get it into why that is.... 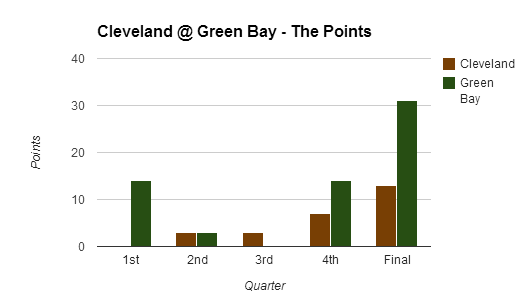 Cleveland got the ball to start the game, and things quickly got off to a rocky start. After an incredibly fast three-and-out, the Packers got a nice 18-yard return from Micah Hyde that set them up at the Cleveland 40 to start the game. It took the Packers all of 4 plays to find the endzone by way of a Jermichael Finley TD reception. Green Bay would jump out to a 7-0 lead.

On the Browns ensuing possession, on 4th and 1 at the Packers 37 yard line, Brandon Weeden was intercepted. The play drew the ire of a lot of fans, when the Browns elected to pass on both 3rd and 1, as well as the 4th and 1 play. I don't understand running both passes consecutively with 1 yard to go. Why not run on 3rd, and if you don't get it, pass on 4th? Complete head-scratcher early.

The next drive by the Packers was all about Eddie Lacy. The Browns front-seven has been great against the rush this year, but Lacy sliced them up on this drive. Lacy carried the ball 6 times for 34 yards, and capped off the drive with a 1-yard TD rush to put the Packers up 14-0.

The Browns would get the ball back with a little over 11 minutes to play in the half and put together a decent drive that was aided by an unnecessary roughness penalty (one of 3 first downs by way of penalties for the Browns). The drive looked like it was going to sputter out when Brandon Weeden was sacked on 2nd and 8 from the GB 29, that set up a 3rd and 18. Weeden would scramble (yes, scramble) for 11 yards on 3rd down to put them back into field goal range. Billy Cundiff would connect on a 46-yard field goal to put the Browns on the board, down 14-3.

With just over 5 minutes to play in the half, Aaron Rodgers and Co. went to work and put together another drive, aided by a couple Browns defensive penalties. The Packers got down to the Browns 8 yard line, but the Browns did a good job holding them to a field goal. Mason Crosby would connect on a 26-yard field goal to end the half, giving the Packers a 17-3 halftime lead.

This was the first time all season that the Browns did not lead at halftime. And you got the sense at halftime it was going to be hard for the Browns to swing the momentum back in their favor.

Cleveland's defense actually came out and stood tall a little bit to start the second half. A big sack on the first drive of the second half by Chris Owens and Paul Kruger forced the Packers to attempt a long field goal that Mason Crosby would miss.

Even with the long field goal miss, the Browns couldn't take advantage of the good field position, but did do a good job pinning Green Back inside their own 10. The Browns D would then stand tall and forced a GB punt from inside their own 15.

Cleveland would again have good field position late in the 3rd quarter. This time they were able to take advantage (aided again by an A.J. Hawk facemask penalty). Cundiff would make a 44-yard field goal to put the Browns down 17-6.

The Browns defense would again give the offense a chance, and the offense would get the ball with about a minute to play in the 3rd quarter. After the Browns actually converted on two 3rd downs on the drive, the Browns were faced with their third 3rd down of the drive. Brandon Weeden wasn't able to connect with Greg Little on 3rd, and that set up decision time for HC Rob Chudzinski. With over 11 minutes to play, down 11 and faced with a 4th and 15 at the GB 31, Chud would decide to go for it as opposed to attempting a field goal to make it a 1 possession game. I didn't at the time, and still don't agree with the decision to go for it there. In my eyes, the chances of connecting on a 48-yard field goal are exponentially higher than Weeden and the Gang connecting on a 4th and 15 when they need it the most. I know that Weeden actually gave them a chance and that Josh Gordon would drop what would have given them a first down. But we're really splitting hairs here. If you're able to make the field goal and give your defense the opportunity to stop the Packers, which they had been doing, then your offense is a score (and 2 point conversion) away from a tie ball game. Then again, you go for it and Gordon actually catches the ball, then you're in the redzone with a chance to really make it a game. So, obviously there's a million "ifs" and "what could've beens", but the reality is that they didn't make a play when it mattered most, regardless of the play call.

After the Browns couldn't connect on 4th down, the game's momentum was all for the Packers now. The second play of the Packers next drive was another pivotal point in the game. Rodgers was able to connect with Finley over the middle and Tashaun Gipson laid a nasty hit on Finley. Finley would go down hard, lost possession of the ball, and Gipson was flagged for unnecessary roughness. Now, I understand Finley was hurt (and it appears he's going to be okay thankfully), but that doesn't discredit the fact that it was a terrible call. The ref said that Gipson lead with his helmet, even though he clearly did not. I'm all for player safety, but if these hits continually are penalized, it makes the game less interesting to me. I also watched the replay a lot and still think the ball came out, but it would've been hard for the refs to overturn. Gipson appeared to be all class about the incident, and sent out the below tweet today:

Thoughts and prayers going out to @JermichaelF88 hoping for a speedy recovery. God bless bro

I hope Finley has a speedy recovery.

The drive for the Packers would continue and a Jarrett Boykin 39-yard reception would set up the Packers at the Cleveland 1 yard line. Green Bay would find the endzone on the next play by way of a Jordy Nelson TD reception. That made the game 24-6

Travis Benjamin wasn't able to take the ensuing kickoff all the way, but did manage to take it back 86 yards and gave Cleveland great field position. The Browns drove inside the Packers 5 yard line, and were faced with another 4th down. Weeden sent a fastball right into the hands of Jordan Cameron for the TD on 4th down. The Browns would get a little closer, down 24-13.

Soon after, Green Bay would get a break by way of a questionable pass interference penalty on Buster Skrine, and would ultimately find the endzone again, this time Rodgers connecting with Boykin for a 20-yard TD catch to put the game out of reach 31-13. 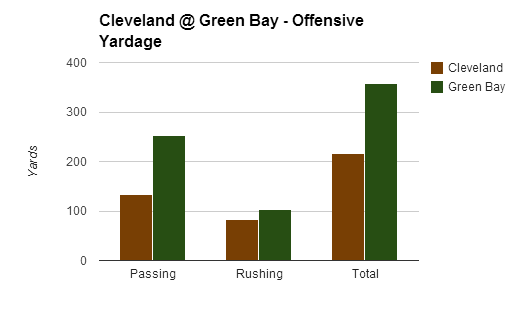 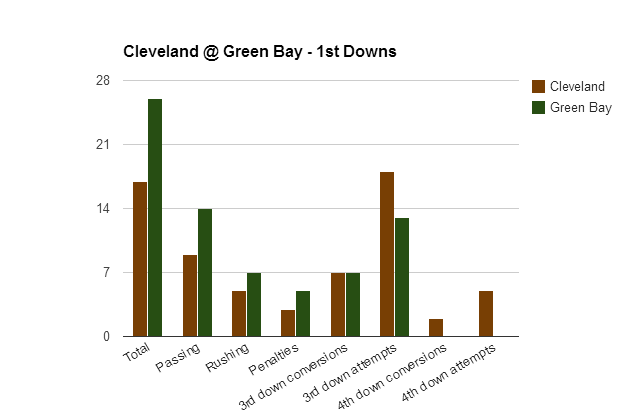 Green Bay is a tough team, and I don't think a lot of people expected the Browns to head into Lambeau and nab a victory. But I wanted to see some more fight from this team. I wanted to see a team compete and battle against one of the better teams in the NFL. The Packers were banged up and we had a chance to make some noise. Instead, we saw the same nonsense we feared we'd see. The Browns were pretty bad in all facets of the game on Sunday. Offense didn't do anything. Defense didn't do much. Special Teams had a big 80+ yard return, but there were still penalties and missed opportunities, etc.

All together, Sunday was one of those games you watch the film, try and get as much out of it as possible, and look forward to the next one. There really wasn't much to be excited about after that performance. Now we'll look ahead to another tough matchup in Kansas City. Who would've thought when the Browns would head to Kansas City, they'd be facing an undefeated Chiefs team? Houston gave them a run for their money this week, here's to hoping we do the same!