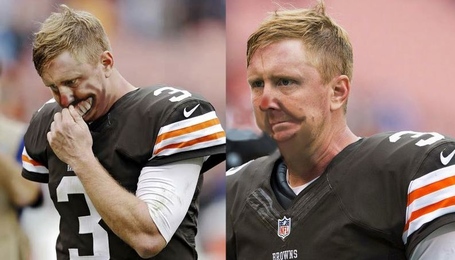 1. Looking at those guys from the Dawg Pound wearing those Dog Masks, I got to thinking about Dawg Types, associated with our Canine D-Line. A reality since Hanford Dixon christened his Defense, Dawgs, because they were supposed to get after the Offense in Scrimmages like Crazed Dawgs, and treat them like they´re Scaredy Cats. I´m not sure you do. But, generally people will form a picture or a semblance of a visual truth in their minds. When they say Dawgs, mine strays to a Kennel Mutt. You know, the kind, that incorporates Larger Dogs. Like Bulldogs. And Pitbulls. Short Hair, Stocky Types. Usually Brown. A Typical Kennel Product. Short Snout, Short Hair, Stocky and Burly. Then you go and associate a Definite Human Type. Like Shaun Rogers. Or currently we seem to be employing a few. Phil Taylor, John Hughes and Ahtyba Rubin seem to qualify. If true or not for you. These are my associations, when I hear Dawgs. So, here comes my question. Judging by those Two Guys wearing the Dog Masks. There seems to be an allowance for a Smaller Long Snouted Type. No, not Dawg Pound Mike, I believe. His friend. The Ochre Colored, Longer Snout, Sheppard Looking Dog Mask Wearing Guy. Are other Types of Mutts, or Kennel Associated Looks Allowed?

-Answer: Judging by Ishmaily Kitchen, Armonty Bryant and Billy Winn, being Proportionately Different Types As Humans. To like a Burly, Pudgy Faced Phil Taylor or Ahtyba Rubin. I would say, yes! Different Dawg Types are allowed. For the future of the Dawg Pound, I admit Ishamaily KItchen into the Kennel Mix. He´s like a Pugnacious Squat Type Of Dog. Billy Winn is Some Kind Of Muscular Strong Jawed Mastino Type. And Armonty Bryant is that rare Sheppard Derivative, that rarely finds it´s way into the Pound. You know, like Shep in Call Of The Wild, or something. Sorry for the lengthy Question and Answer. I want this to be a quick Question and Answer Jibe Thing. But, People´s Imaginations are sensitive. Best get it right. My money is on Winn and Armonty, as fate brought them upon us. Ktichen too maybe. I´m thinking Talented DT. Like Rocky Bernard. If possible, I would now hedge my bets with them.

2. What´s up with Haslam and the FBI?

- HazzLame? Who cares, we have Positive Chaos in the Personnel Office. I like the action. Don´t care. Owing to…No. Honestly. I think Jimmy Haslam is averting indictment. The postponed and prolonged Court Proceedings, have him hanging by a thread, not exactly threatening his freedom ultimately. But, I think the FBI will bring his authority into question. My guess the rumor of Signing Ownership and Operations over to Jim Haslam Senior is true. And they´re still flirting with the Presidency of the USA, believe it or not. I think they sense their Family Reputation has been staked. Not an Easy Predicament if you know their Importance in the South, or their Influence Nationally. I think a more pertinent question, seeing as they´re Self Invested for the Immediate Future in Cleveland, updating facilities exclusively. Is can the Browns Fan Base shake them, should they decide they´re not well represented by the Haslam Clan? Money talks. But, no money outright yells in silence. Like Eduard Munch. Channel my Inner Gypsy? We´d be better off with an Ex Player Consortium. Skip to Play that.

3. Quentin Groves is injured. Paul Kruger has not been super impressive. And Mingo, not half as sensational as he was Post Draft or into Training Camp. Tank Carder listed as Probable, this week. Any way? At OLB?

-No. He can only shuffle in at ILB. Replace D´Quell Jackson? Better luck impeaching Obama. Craig Robertson? His Ideal Value. I´m guessing more solid than Plymouth Rock. Shuffle into OLB then? I bet that ILB in front of Tank Carder´s name is more reliable than like Mean Green Kerosine in Eco Greeko Fuel. We should start a Tink Tank for how to Decode the Reality Impediments, preventing Tank Carder to OLB.

5. What should we do with Jason Campbell?

-You mean like that Sailor Song? Hooray And Up She Rises? I don´t know. Get him a Sacred Browns QB Record, send his Browns Jersey to Canton. And retire his jersey? Then stand a Rat´s Ass Chance, to hand him a Plain Ticket?

6. Will Brandon Weeden be traded?

-No. Still waiting for that QB Competition. Anyone Callin´ Klein? How about that Gordon and Ward Trade? I vote Jets. Threaten a bit of Northern Hillbilly Lifestyle onto the Metro Simms. Bet against the likelihood of another Texas Longhorns QB excelling not succeeding on the Browns, acquire Chris Simms? Just for the hell of it? Do they have anything we want? No. But, ultimately you don´t have to wait long, till someone yells. One Cough Drank (Gordon) and one Ding Ding Ding (Ward) away from the NFL handing down a Suspension and a Medical Voucher. So, what is it. Everyone´s a hypocrite by default, like a Sucker Call? Ummm, could be. But, lets trade them first. No? We need a Value Check on those two, due to the News Worthiness of the Rumor. Two Standing Offers.

7. Will Josh Gordon be traded?

8 Will Greg Little be traded?

-Yeah. For a Starter and a 2nd Rounder.

9. Will Alex Mack be traded?

-No. He´s tearing up Phone Books at County Fairs in Iowa. They figured out he´s a Glorified Farm Team LB….No Restructured Contract offered in a so called Contract Year. He´s a goner.

-How much is that Red Ribbon Culture…Mangini made him the first 1st Round Center taken in over two decades. Well, other than Max Unger, that year. He´s started every game since his Rookie Year. It´s that Premium Rookie Contract. Maybe Mooncamping is wrong about him being too small for Center? He´s not. But, is that rumor about the Debatable Mooncamping Bonus true? It used to be. We need to ween Mike Lombardi off of running his own Value Based NFL To Real Life Endeavor. And Joe Banner gambling on Prices with the Eagles. Not that management is useless. But, I´ll stick with my Stated Desire. A Front Office All Star Team first, then the pursuit of the Super Bowls. We need to credit Jimmy Haslam with laying some Ground Work, it´s decent. Taaangent! Okay. Again. What´s the deal with the Endearment of this Lineman in Cleveland? Everyone knows Cleveland is sentimental. And somehow he´s grown on us. I´ll keep that in mind, next time someone does a National Feature on Draddy Trophy Winners. Or when I try to get Optimal Imbursement for my Limited Edition Super Platinum Alex Mack Topps Card, or something.

11. Who else could be traded? Hey, I´m asking as the Theoretical Heretical Fan!

-Joe Thomas, Mitchell Schwartz, Oniel Cousins and Jason Campbell. John Hughes maybe. Barkevious Mingo even. But not Billy Winn, Armonty Bryant, Ishmaily Kitchen. I´m guessing Phil Taylor, but he´s our Franchise Player in hiding. That´s two 1st Rounders. Is he worth that? In a good mood, certainly. Bet on it? Don´t have to. It´s a Registered Cosmic Fact.