The Browns nearly got out of Arrowhead with a W, instead some costly mistakes gave them their third straight L. Let's take a look and how it happened.

Not many people gave the Browns a chance this week visiting the undefeated Chiefs. I was not expecting the Browns to thump the Chiefs, but I was very interested to see what this team would like with Jason Campbell under center.

While the Chiefs remain undefeated after they beat the Browns 23-17, it was a lot closer than most people predicted. For most of the first half the game went about as expected. The Chiefs steamrolled the Browns through their first 5 possessions, only failing to score 1 out of those 5 on a missed 52-yard field goal. Cleveland quickly gained some momentum on a flea-flicker and ultimately looked like a different team in the second half.

In the end, the Browns didn't have enough magic and fell to 3-5 on the year. So let's take a look at how the Browns almost pulled off the upset. 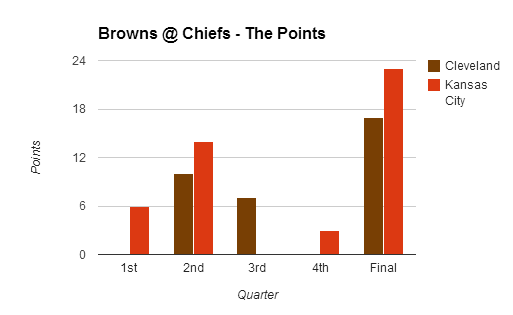 As I mentioned above the Browns looked like they had no answer to the Chiefs in the first half. While they were able to hold them to a few field goals, the Browns defense did not look up to the task. Kansas City came out the gates with scoring drives of 9, 11, and 14 plays. Cleveland came out with 3 straight three-and-outs. So clearly the Browns would be playing from behind, down 13-0 early in the second quarter.

The Ryan Succop missed 52-yard field goal really acted as a turning point for the Browns. It took all of 2 plays following the missed FG for the Browns to find the endzone. Jason Campbell found Jordan Cameron for 19 yards, and then on a beautiful flea-flicker found Josh Gordon for a 39-yard touchdown. That put Cleveland on the board, down 13-7.

With a little under 3 minutes to play in the first half, Alex Smith put together an efficient drive that was highlighted by some big Jamaal Charles runs and capped off with a 28-yard touchdown to Dexter McCluster. Kansas City would extend their lead to 20-7.

The Browns would respond well though. On a quick underneath route, Campbell was able to find Josh Gordon who extended the play for 47 yards to put them in field goal range. The Browns couldn't extend the drive from there, and would settle for a Billy Cundiff 44-yard field goal. Cleveland would go into the locker rooms down 20-10.

Cleveland got the ball to start the second half, and Campbell continued to impress. Campbell found Davone Bess for 15 yards on the first play of the half. He then continued to look Josh Gordon's way, Gordon had catches of 14 and 23 yards on the drive. They'd get into the red zone, but would be faced with a 4th and 1. The Browns went for it and Willis McGahee got just enough to extend the drive. On the next play Campbell hit Fozzy Whitaker on a wheel-route out of the backfield for a 17-yard touchdown catch (his first career TD). The Browns would pull within a field goal, down 20-17.

The Browns and Chiefs would continue to engage in the field position battle. To start the 4th quarter the Browns had a good defensive stand with 2 sacks, one by Phil Taylor and the other T.J. Ward.

The Browns came out and Campbell found Jordan Cameron for 37 yards, Cameron made a great adjustment to make a heck of a catch. On the next play Willis McGahee broke off a 9-yard rush to the Kansas City 26, but the rush was negated by a suspect holding call on Joe Thomas. Cleveland would ultimately be forced to punt, but would pin Kansas City on their own 1 yard line.

The Browns would again have another strong defensive stand and looked to be getting the ball back with good field position when the Chiefs punted. That's where things went terribly wrong. Davone Bess was back to return the punt , replacing Travis Benjamin who was injured earlier returning a punt. Bess didn't field the punt cleanly and muffed it, Kansas City recovered. I went back and watched the replay, and the CBS broadcast shows the punt from behind in the endzone. Right as Chiefs punter Dustin Colquitt punts the ball it looks like he drops his head, immediately knowing it was a short punt. This is reinforced by the fact that the punt was short and Davone Bess has to do a better job reading that and probably should've let that ball bounce. I get that Bess was trying to make a play and could've given the Browns better field position with a return, but he ended up costing the Browns big time with the turnover. Cleveland never really would have a chance to regain the momentum.

The defense would again stop the Chiefs from scoring, and the offense got the ball back with just under 4 minutes to play and with no timeouts. Cleveland was able to get a first down before a sack that put them in a hole. On 4th and 7 on Cleveland's last real chance, Campbell was flushed out of the pocket and threw back across the field to, none other than, Davone Bess. Bess came back to the ball and made a sliding attempt at catching the ball, he was unable to reel it in and the Browns turned it over on downs. The pass was a desperation toss from Campbell and at least was in play, but Bess should've caught the ball. It would've been a tough catch, but when I re-watched the play, the more I think he should've made the catch. I know Bess had a really rough afternoon, but he was brought in to be the sure-handed, reliable receiver for this young team, and quite frankly he hasn't been that all season.

Cleveland did get lucky that the 4th down play stopped the clock with 2:01 on the clock, so they got the 2-minute warning as basically a free timeout. The Chiefs had good field position after the turnover on downs, and the Browns did a good job defensively, but the Chiefs still tacked on a field goal to go up 23-17.

Cleveland got the ball with 17 seconds remaining and ran a crossing route to Josh Gordon, who did not get out of bounds and time expired. Now, I understand that the Browns had only 17 seconds left with no timeouts. I get that it's a long shot and that chances of pulling something off were slim. But I also understand that stranger things have happened. It was just frustrating to watch another "Browns" ending. This was a designed play at the end of the game. Gordon runs a crossing pattern, doesn't get out of bounds, rest of the team looks bewildered, and gets no chance to spike the ball. It'd just be nice for a change to see some non-Browns plays. Even if they hit a 15-yard out route, get out of bounds, and try (and even fail) a 60 yard Hail Mary. No hook-and-ladder, no lateral, nothing? That's all I'm askin'. 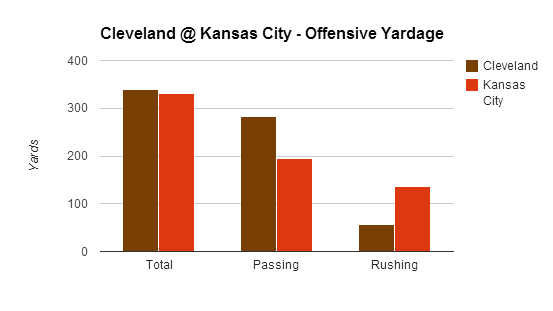 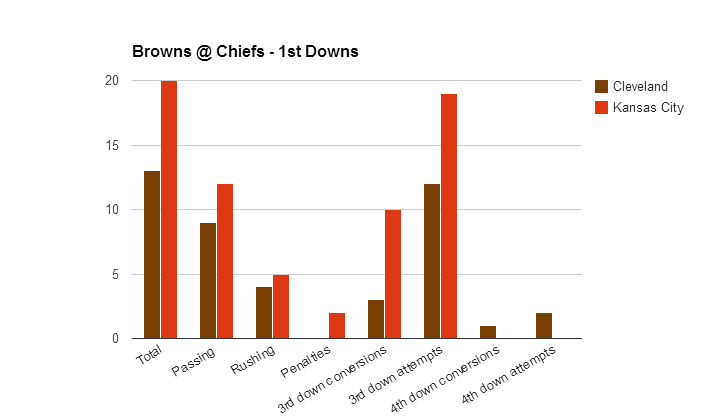 I didn't expect the Browns to go into Arrowhead and knock off the undefeated Chiefs, so while I don't believe in moral victories, I do think this game was a step in the right direction. I've said for a while with at least average QB play this team can surprise people, and they did just that Sunday. There were still a few errors that cost the team actually pulling off the win, but they are still improving. There's still areas to improve, specifically on third downs both offensively and defensively, as well as playing consistently for all four quarters (list could go on forever).

I think if Jason Campbell can do what he did Sunday and keep this team in it, they still can make some noise this year. The Browns get to head home now after two tough road games in Green Bay and Kansas City, so it'll be a nice respite to be back in Cleveland. After they take on the Ravens they'll get the bye, a win would be some positive momentum heading into that bye. The Ravens are coming off their bye and lost to the Steelers last time out. Cleveland should have a good chance Sunday, and we can only hope they'll put the pieces together this time.