In last week's 23-17 loss to the Kansas City Chiefs, the Cleveland Browns lost one of their players who had the ability to instantly spark the team, just like he did against the Buffalo Bills earlier this season: WR Travis Benjamin. Benjamin is out for the year with a torn ACL. Even though head coach Rob Chudzinski declared that WR Davone Bess would take over the punt return duties, it was clear that the Browns needed a new teammate who could provide a spark in the return game, and maybe even in the receiving game as well.

The Browns tried out two players on Tuesday. Everyone knows that I am a huge Jordan Norwood fan, but ultimately, the team decided to sign Armanti Edwards. Edwards was actually a third-round pick in the 2010 NFL Draft, but he only has 5 catches for 121 yards in his career. Edwards played for Chudzinski with the Carolina Panthers the past two years, so the familiarity with Chudzinski's offensive system is already there.

On Wednesday, Chudzinski spoke about the versatile type of role that Edwards can play as a speedster and a former quarterback:

On if Edwards will be returning kickoffs or punts this week: "We’ll have him as one of our options of doing that."

On signing OL Reid Fragel: "Reid is a guy that our scouts had identified and kept an eye on. He gives us some depth at the offensive line position as a developmental guy."

On what he remembers about Edwards in his time at Carolina and what he can do to help the offense: "I wasn’t there at that particular time, but Armanti is a bright guy. He was making a conversion from quarterback to playing receiver, which takes some time. He knows, like I said, all of the positions. He has good skills. He can run. He can catch and do those types of things. He’s been a returner. We’re hoping that sometimes a new start, a fresh start, can help guys."

On if Edwards is like TE MarQueis Gray when it comes to Wildcat situations: "He’s done some of those things before."

Edwards only had two punt returns in 2012, but one of them went for 69 yards. He also had an 82-yard reception last season, and attempted a pass in Chudzinski's offense. Let's take a quick look at each of those plays. 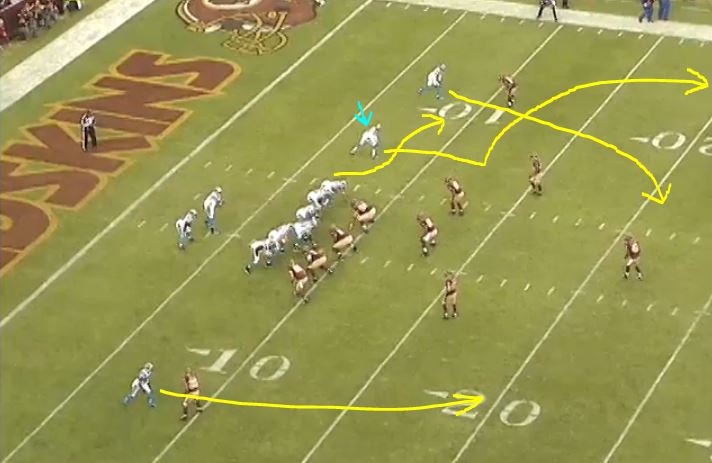 Edwards starts off in the slot. QB Cameron Newton playfakes to the running back, and Edwards sells a run block at first before doing a wheel route to the sideline. 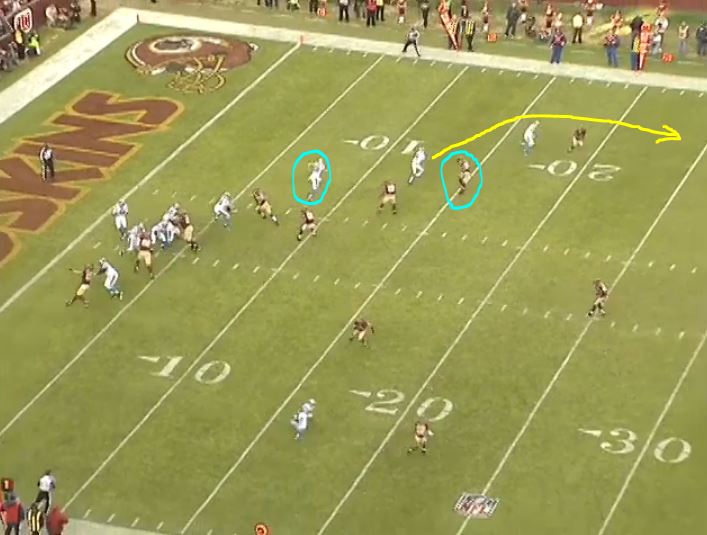 There is a breakdown in coverage; after the playfake, the circled defender rushes up to cover the tight end, which will leave Edwards wide open. 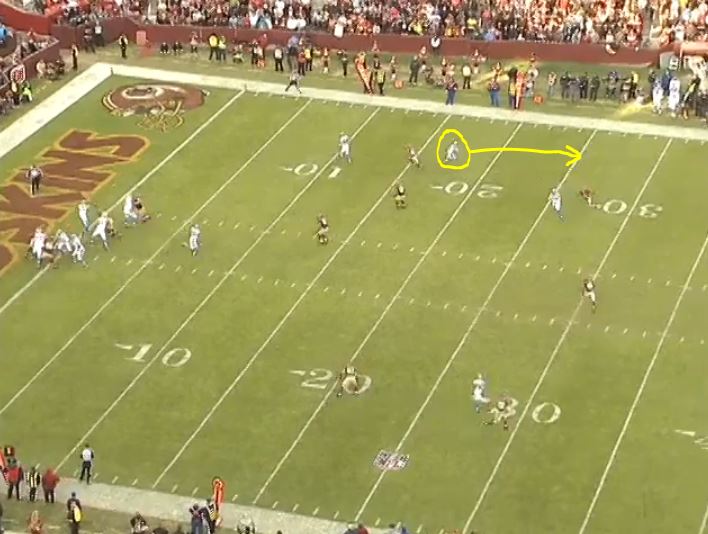 There is he: wide open. Edwards only played 15% of the snaps in this game, which is similar to the amount of reps you would see from WR Travis Benjamin. Edwards got chased down after an 82-yard gain, showing he doesn't have the same type of speed that Benjamin does. 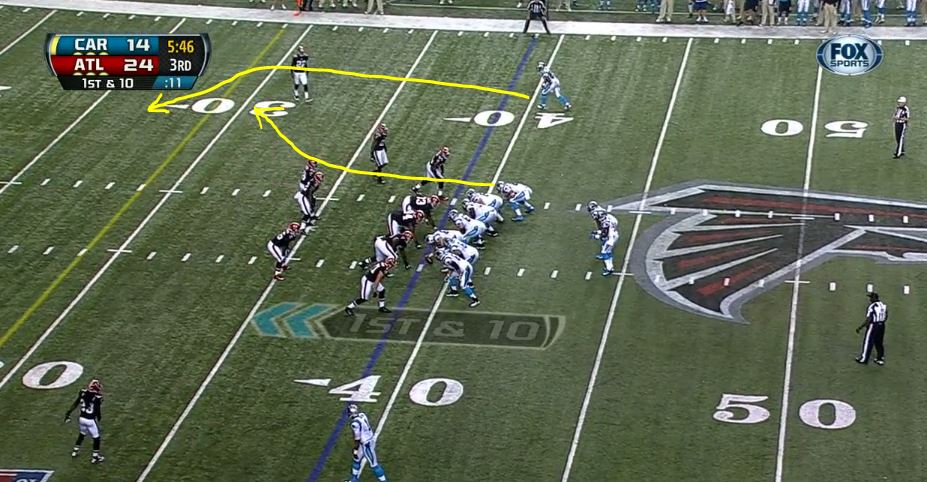 Edwards lines up at quarterback here, and Newton is at the bottom of the screen. WR Steve Smith runs a post at the top of the screen, and the tight end runs a route to the corner. 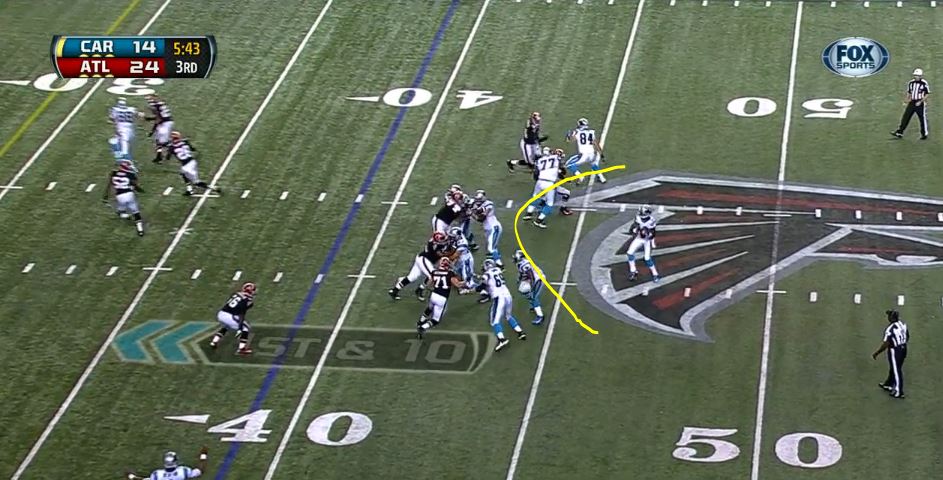 Edwards (a lefty quarterback), fakes to the running back and has a lot of protection. 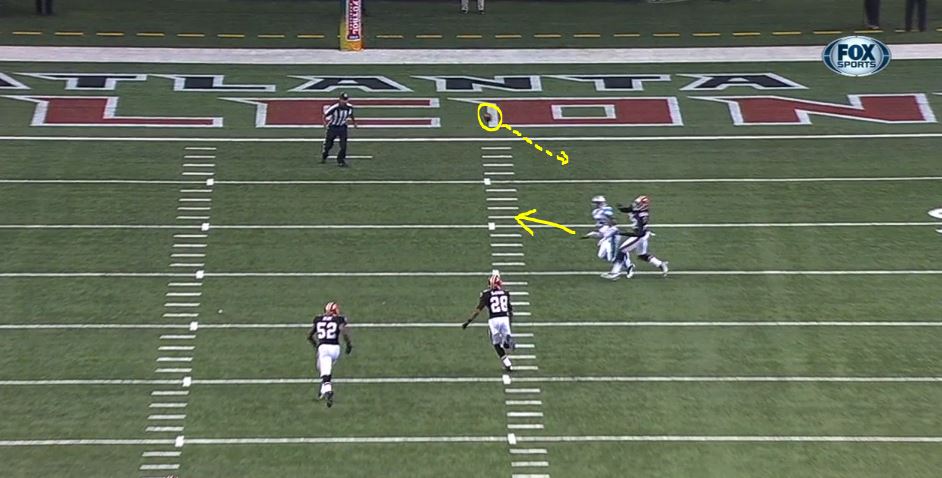 It's hard to tell from this screenshot, but Edwards' pass is not hitting Smith in stride; the pass is trailing toward the right sideline too much here, behind Smith. Smith was actually more open that this, but he is already slowing down in an attempt to reach behind him to get a hand on the pass. The defender knocks the pass away, and at first, pass interference is called, but the officials end up picking up the flag.

The Panthers tried this play mid-way through the third quarter, and Newton had actually completed a pass to Edwards for 12 yards on the previous play. That was probably done to try not to raise as much suspicion when they broke the huddle with the specialty play on the next down. Those were Edwards' only two offensive snaps of the game. 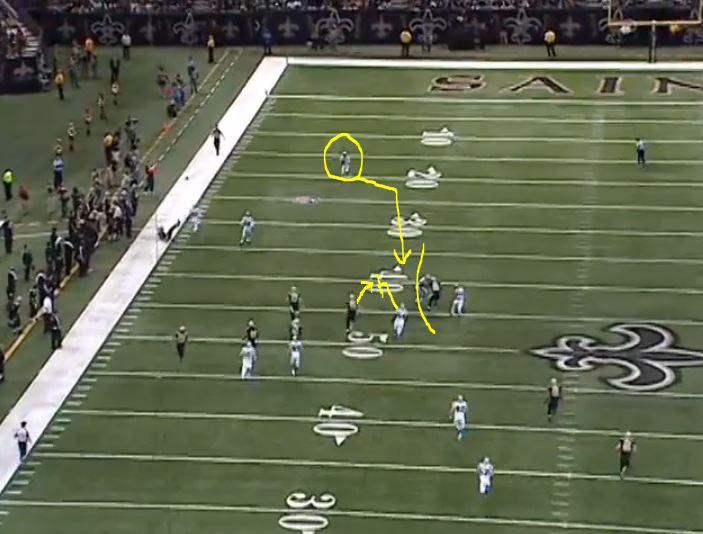 Edwards fields this punt near the sideline, and you can already see how too many of New Orleans' coverage unit is on one half of the field. Edwards already has one area shielded off in this screenshot, and I drew some lines to show where the other shield will come from to open up a seam. 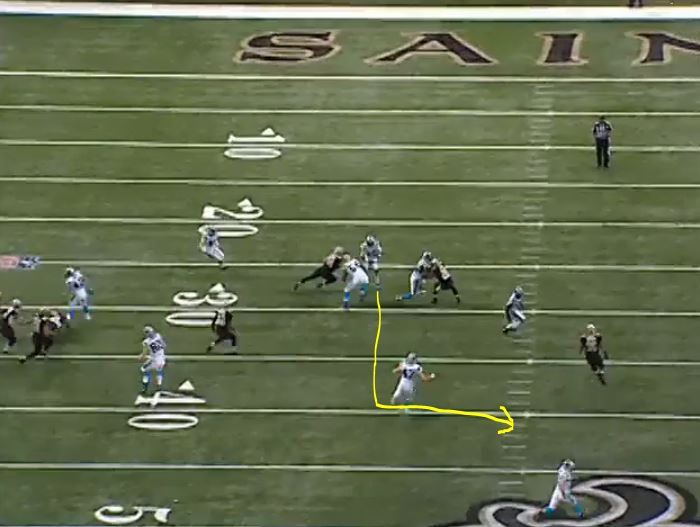 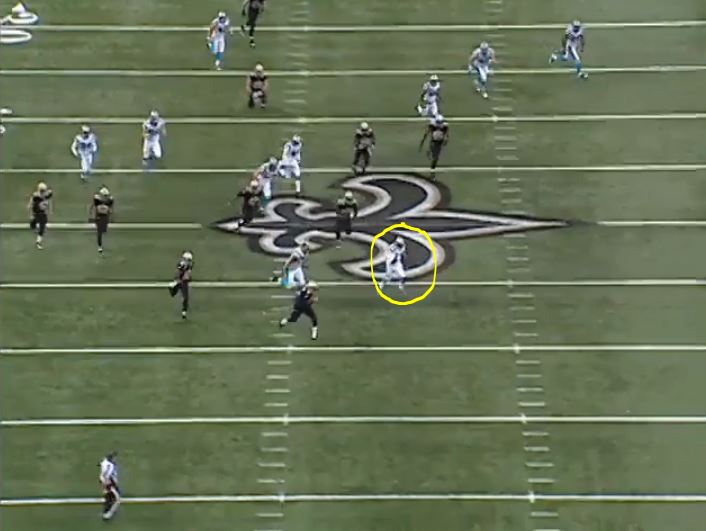 Edwards only has the punter to beat here, but he can't do it. He honestly doesn't look that fast, unless maybe the Saints' punter is just way faster than your average punter. Edwards played 8% of the snaps on offense against the Saints, but never had a pass come his way.

We've seen Chudzinski not afraid to use some gadget type of stuff before. Although they've used TE MarQueis Gray on some read-option plays, Edwards might have been signed over Norwood for his familiarity with these types of plays.

Edwards hasn't been on the street forever; he was released by the Panthers a few weeks ago. Cat Scratch Reader, our Panthers affiliate, said this upon his release:

Edwards was selected in the third round of the 2010 draft via trade with New England. His selection will be remembered as one of the most foolish moves in franchise history as the Panthers took a small-school quarterback with the desire to make him a wide receiver during a lame duck season. Carolina gave up the first pick in the second round of the 2011 draft, with a new coaching staff installed that had no loyalty to Edwards.

It sounds like the conversion from a quarterback to a wide receiver didn't pay off, but maybe he'll find some further growth in the developmental department as a member of the Browns. Also, there's this:

Is it me or is it funny that Armanti Edwards went to Cleveland… where he may forever be popular for beating Michigan. Instant fan favorite