The midseason reviews for the Cleveland Browns offense and defense can be found here:

The final unit we will cover is special teams, a place where the coach (Chris Tabor) remained the same this offseason, but most of the personnel was overhauled.

It's pretty difficult to discern how your special teams is doing solely based on the statistics above. For example, our kickoff coverage is 12th, but the number doesn't show that most of the time, Billy Cundiff is just booming the ball out of the end zone for a touchback. Also, our kickoff return average makes it seem like we are very good in that department, when in reality, two garbage time returns for big yardage against the Packers on a rainy day helped inflate our numbers. 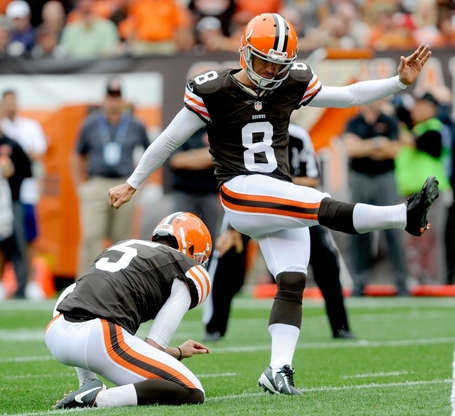 When Phil Dawson signed with the San Francisco 49ers, it was tough to say goodbye to him. The Browns didn't bring in a firm replacement as Brandon Bogotay competed with Shayne Graham in the preseason. After neither kicker shined, the Browns surprisingly cut both kickers before their first game of the season, and made the late addition of Billy Cundiff. Expectations for Cundiff were not very high, to say the least.

To the surprise of many, instead of being an unreliable kicker, Cundiff has actually been quite reliable. He hasn't had a lot of opportunities, but is 13-of-15 (86.7%) on the season, including 2-of-2 from beyond 50 yards, a distance Cundiff has historically struggled at. The two misses he had earlier this season both came in the same game, and it was when Cundiff was battling through an injury.

Part of the reason Cundiff was originally brought in was for his work on kickoffs. He is currently around 6th in the NFL in touchback percentage, getting a touchback 66.7% of the time. Side note: Phil Dawson is 12-of-15 on field goals for the 49ers this year. 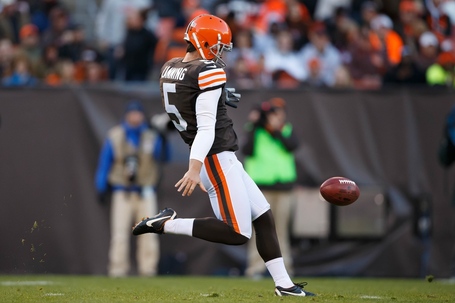 The Browns experienced a lot of issues with Reggie Hodges last year and didn't try to re-sign him in 2013. In fact, it appears that nobody wanted Hodges, since he wasn't in any NFL camp. The Browns held a competition between T.J. Conley and Spencer Lanning, and Lanning came out on top. The expectations weren't high for Lanning; we were just hoping for a guy who wasn't terrible.

So far, Lanning has done an admirable job as the Browns' punter. He's no where near an elite punter; in fact, his 39.5 net average ranks him 20th in the NFL. That is better than Hodges' average of a 37.1 net average last year. In fact, if my research is correct, Lanning currently has the highest net average of any regular Browns punter since 1999.

Lanning also has 16 punts that have been downed inside the 20, compared to only 3 touchbacks. He also endeared himself to Browns fans by throwing a touchdown pass to TE Jordan Cameron against the Vikings. The best part about Lanning's season, though, is that he isn't shanking punts. Hopefully Lanning continues to grow into his role. 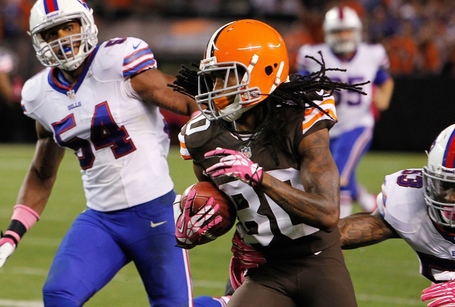 This position has turned out to be a mess for the Browns. At first, the punt return position was very stable, with WR Travis Benjamin on pace to have a record-breaking season. Then, he torn his ACL a few weeks ago against the Chiefs, meaning WR Davone Bess and WR Armanti Edwards will split time as less-threatening return men.

On kickoffs, the Browns originally expected RB Dion Lewis to be the return man, but he broke his leg in the preseason. Since then, they've bounced between the likes of RB Bobby Rainey, WR Greg Little, WR Travis Benjamin, and RB Fozzy Whittaker at the position.

The Browns seem to have settled on Whittaker at the moment, who has an average of 28.2 yards per return on just 5 attempts. Long kickoffs have generally rendered the kickoff return game useless, though -- just don't "Greg Little it" and get downed at the 7 yard line.

Nobody has particularly stood out in special teams coverage. Although Bademosi leads the group in tackles, I think he's actually missed some opportunities to make plays this season. Long snapper Christian Yount has been money as usual.

Let us know in the comments section what your overall assessment of the Browns' special teams has been this season. Which positions have exceeded your expectations, and which ones have come up short? Do you see things getting better over the final seven games?