The Cleveland Browns did a great job defending Andy Dalton earlier this season, holding the Cincinnati Bengals' offense to without a touchdown in a 17-6 win. I have often said that I felt Dalton was an average quarterback who was smart enough to know he could get by with lobbing balls up for A.J. Green at times.

After losing to the Browns, though, it looked like Dalton and the Bengals might actually be on track. The Bengals' defense paved the way for a big win over the Patriots, but then over the next three games, Dalton threw for 11 touchdown passes and only 2 interceptions, helping Cincinnati go on a four-game winning streak.

All of that progress unraveled over the past two games, as Dalton has been held without a touchdown and has thrown 6 interceptions, 3 of which game this past Sunday against the Baltimore Ravens. Is it just a case of bad luck for Dalton, or is he making a lot of unforced errors? Let's take a look: 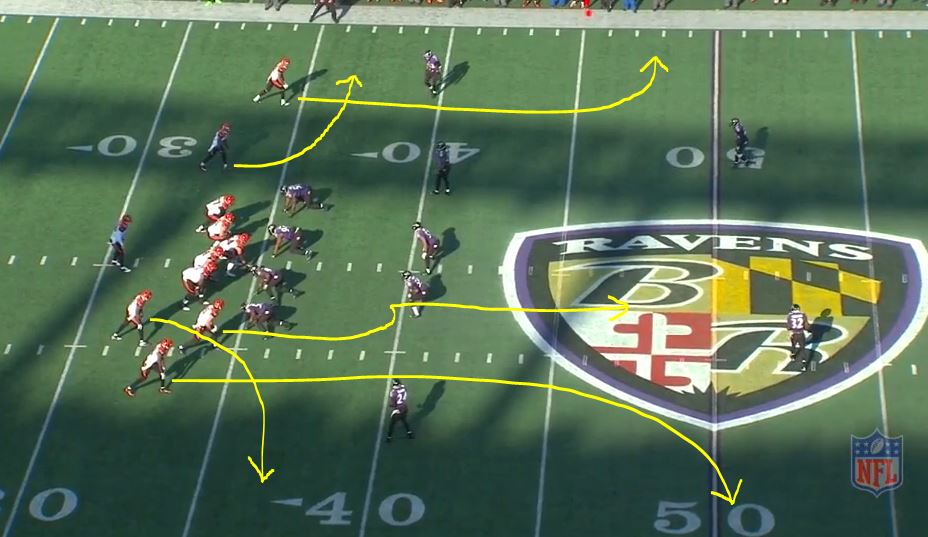 With the Bengals down 10-0 mid-way through the second quarter, the Bengals faced a 3rd-and-10 situation. The Bengals have trips receivers to Dalton's right; the player closest to Dalton on the right and at the line of scrimmage is TE Tyler Eifert. He is the intended target. Notice the safety right behind the route Eifert is running, and the little fake that Eifert will do. 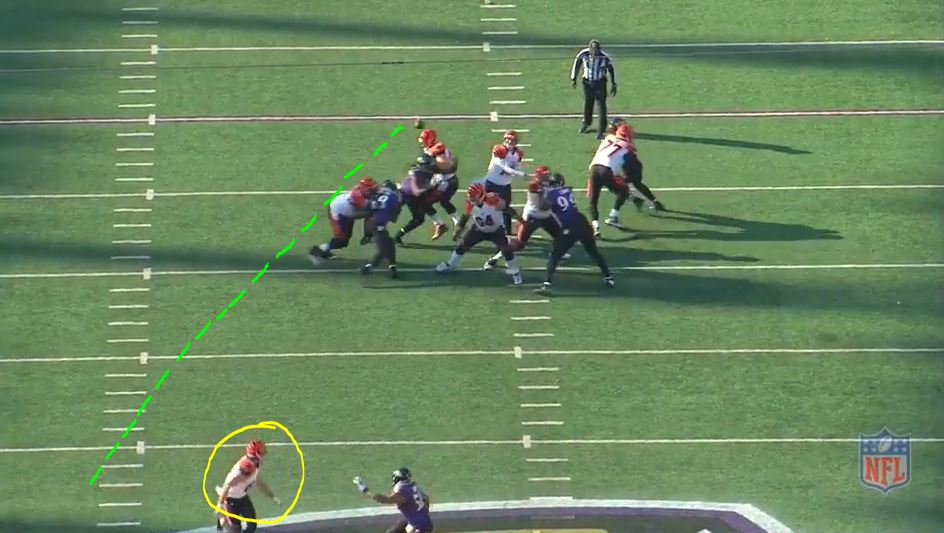 Right as Eifert does his fake, Dalton is 100% committed to the route and throws the ball. He is trusting that the linebacker won't be good enough to make an athletic play on the ball, but the pass still needs to be thrown reasonably well and between the linebacker and the safety. Instead, based on the green trajectory I drew in above, this pass is so behind Eifert that it makes you wonder what the hell happened. He's not facing much of a pass rush here. 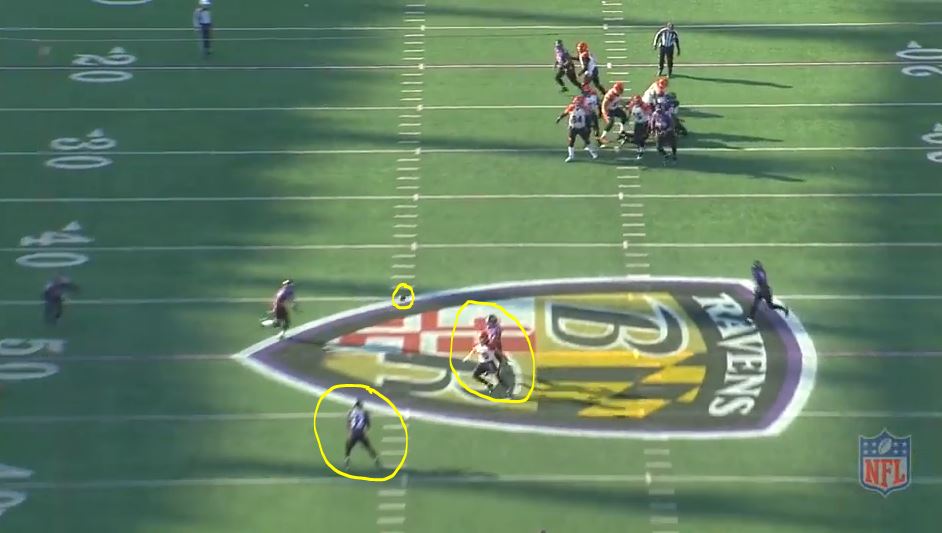 The safety just camps out and makes the interception, following it up with a good return that sets up a Ravens touchdown. 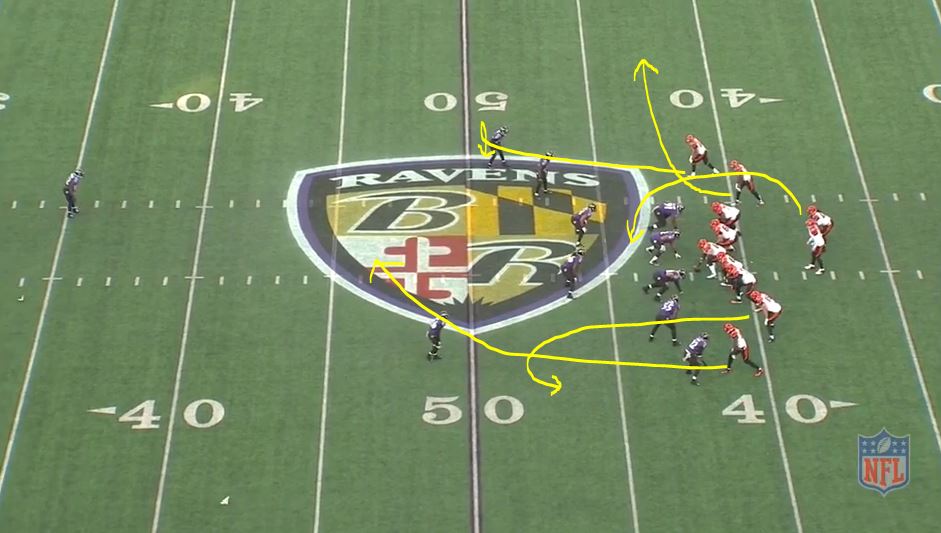 With the Bengals down 17-3 mid-way through the third quarter, Cincinnati starts their drive near midfield and is facing a 1st-and-10. Dalton is going to target WR Marvin Jones, who is the further receiver to the right of him in the formation above. Jones fakes the out route and then starts to cut back to the middle of the field. 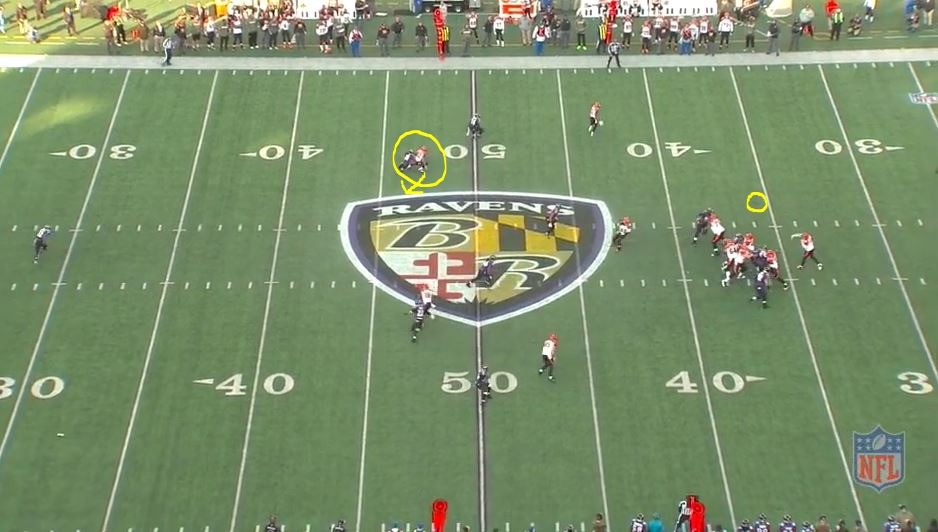 The timing isn't bad here, nor is the decision. Dalton is releasing the ball just as Jones makes his cut, and there is a lot of open space toward the middle. 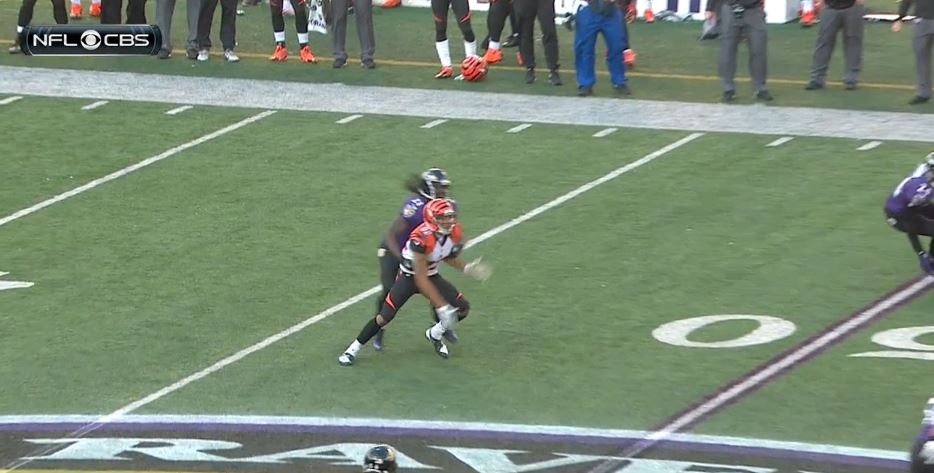 The defender does a nice job blanketing Jones the whole time, but a throw to the inside part of the field, where Jones' momentum is headed, should either be a completion or a pass breakup -- not an interception. 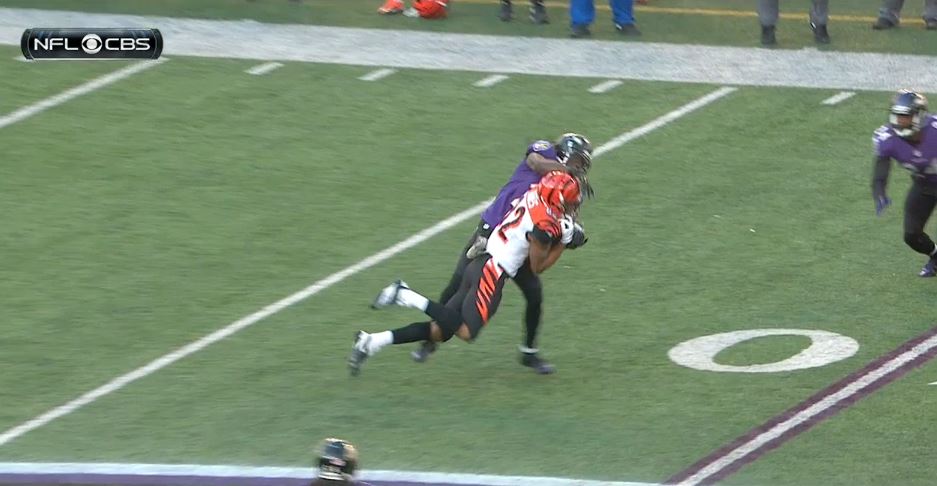 The throw is behind Jones; you can tell based on the torquing of his body that he had to jump back the other way for the ball. Although a more physical receiver might still come away with this catch to bail out his quarterback, CB Lardarius Webb's tight coverage pays off, as the pass slips through Jones' hands just enough to where Webb is able to rip it away in the air for an interception. 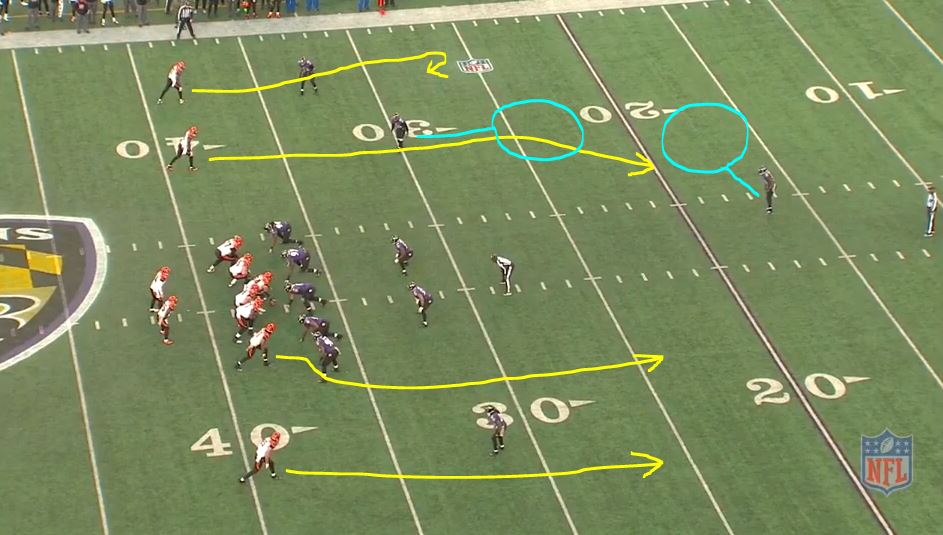 The final interception of the day for Dalton came with 2:01 to play in the fourth quarter and the Bengals down 17-10. Facing a 2nd-and-9, Dalton is going to be looking to the slot man on his left, A.J. Green, all the way. This is a play where Dalton needs to read the safety in the middle of the field. 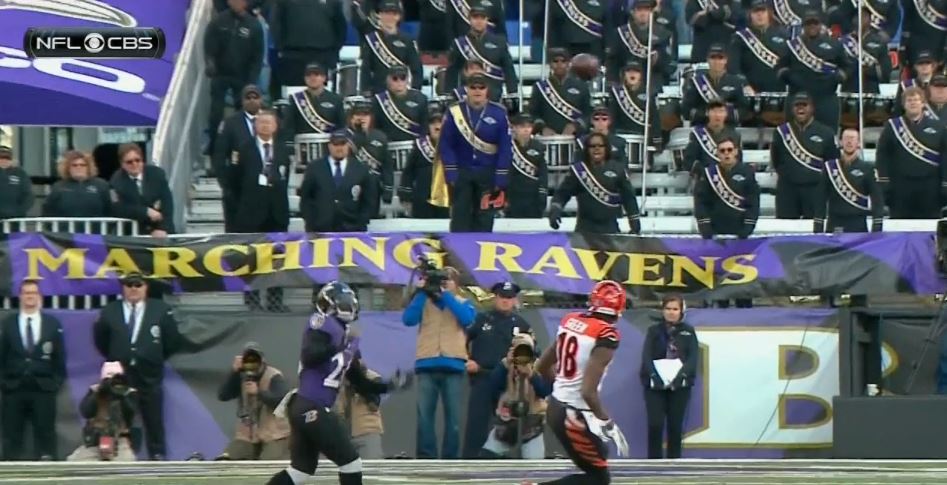 Dalton didn't face much pressure, but his pass is well off the mark -- so much that Green can only watch it go by as the guy covering him tips the pass and the safety behind him intercepts it.

Some excuses can be made for Dalton, I suppose, since the wind gusts were high and of the crossing variety, which threw off both he and Joe Flacco. Still, that doesn't excuse the fact that he didn't make many competent throws the rest of the afternoon either, which I think is more telling of Dalton's performance and the type of quarterback he is.

Also, how was he bailed out (almost) at the end of regulation? By throwing -- and connecting on -- another prayer to Green. The Browns only got to Dalton for two sacks the last time these two teams met, but their defense is playing better now. If Joe Haden and Tashaun Gipson can do another fine job taking away those long-distance throws to Green, then the unforced errors that Dalton is bound to make will be there for the taking for Cleveland; hopefully they will be ready to capitalize.

Test how precise your football knowledge is by playing the Precision Play of The Week for a chance to win Super Bowl tickets – brought to you by Gillette Fusion ProGlide, precision comfort, even on sensitive skin.