Good morning, Cleveland Browns fans, and welcome to gameday! Be sure to check out our game preview and prediction for the Browns' Week 11 contest today against the Cincinnati Bengals. In this week's edition of "The Sunday Five," I talk about the love the team is showing for QB Jason Campbell, the first-half vs. second-half running game disparities for RB Willis McGahee, and more.

Despite having the most starting experience of the Browns' quarterbacks, Jason Campbell was passed up twice before being named the team's starter. Not many people expected Campbell to do very well -- myself included -- but now he's being viewed as the savior at the position. His teammates are all rallying around him, and he was at the center of the media's attention this week. Take a look at this playful gag his teammates played on him at Friday's practice session:

If you haven't read some of the articles on Campbell this week, please do so. Here's one from the Plain Dealer, ESPN Cleveland, and the USA Today. This might sound strange, but I think it might be beneficial for the Browns to be going with a quarterback who didn't start their career with our organization. Jeff Garcia and Trent Dilfer didn't work out back in the day, but Brian Hoyer and Campbell have certainly looked good in 2013. 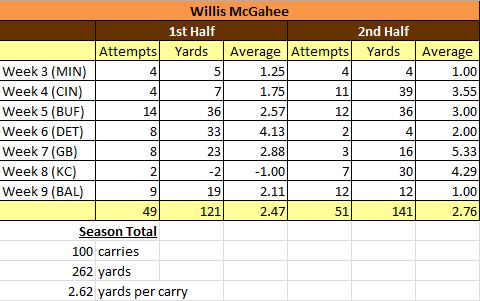 Surprisingly, the numbers by the half have been pretty similar overall, although the only game in which there was consistency between each half came in Week 5 against the Bills.

I don't see a reason why McGahee can't be placed in a reserve role, getting some carries later in the game when we're trying to eat up some clock. Our runs have been too predictable, and I think that can be attributed to McGahee not having the speed or burst to do some of the other things we might find effectiveness with, such as pitch plays or draw plays.

Every run we do seems to be designed to go between the tackles, leaving little room for breakaway runs to the outside. That's the capacity I'd like to see Fozzy Whittaker used in, while Chris Ogbonnaya can take on more of the standard runs. Even if the running game doesn't work very well, the committement to it is important, and our coaching staff understands that. Opposing defenses believe they can stop our running game for no gain or a loss, so I think they come up harder to try to stop it, which in turn sets up the playaction pass better.

The current weather forecast for today's Browns vs. Bengals game could be a factor. Weather.com says that it will be warm (67 degrees) at kickoff, but with a 60% chance of rain and winds gusting at 22 MPH. Other reports say that actual thunderstorms and the really bad weather will kick in at about 4:00 PM, which would be about half-way through the end of the fourth quarter. This is a week where a first half lead could hold a lot more weight than it usually does. I honestly have no idea which team a weather storm would favor; I think it's just one of those wait-and-see type of things.

It's time to predict the inactives for today's game. Here are my guesses for the Browns' gameday inactives against the Bengals (there are seven inactives required): WR Brian Tyms, TE MarQueis Gray, OL Patrick Lewis, OT Martin Wallace, OG Garrett Gilkey, OT Reid Fragel, and ILB Brandon Magee. My scenario would see the return of OG Jason Pinkston in a reserve role. With OT Rashad Butler released, though, I wonder if Wallace might be active over OG Oniel Cousins. I also have TE Keavon Milton being active since Gray has been ruled out.