What happened to the Browns' punt protection in the second quarter against the Bengals?

The Cleveland Browns had a disastrous performance on special teams during the second quarter of Sunday's 41-20 loss to the Cincinnati Bengals. The Bengals must have something on special teams coordinator Chris Tabor, because they also partially blocked a Billy Cundiff field goal back in Week 4.

It was far worse in Week 11, though, as punter Spencer Lanning had one punt travel nine yards after it was partially blocked, and another punt that was blocked and taken back for a touchdown. It was the first time the Browns have had a punt blocked in 20 years, so to say that it is a rare occurrence would be an understatement. What happened?

My first instinct was to look at the team's personnel on the punt protection team. The typical protection on a punt formation has eight players in front of the punter: 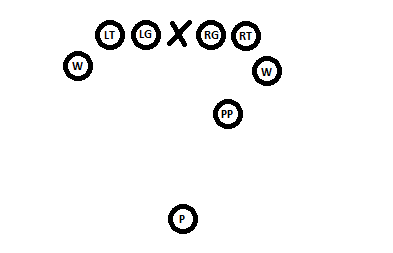 I went back and reviewed the film from our personnel on the protection scheme from the past five weeks. Here are the players I charted, according to the diagram above:

So that I'm not digging too far back, here is a screenshot of our protection from the Ravens game in Week 9, where there weren't any breakdowns in protection: 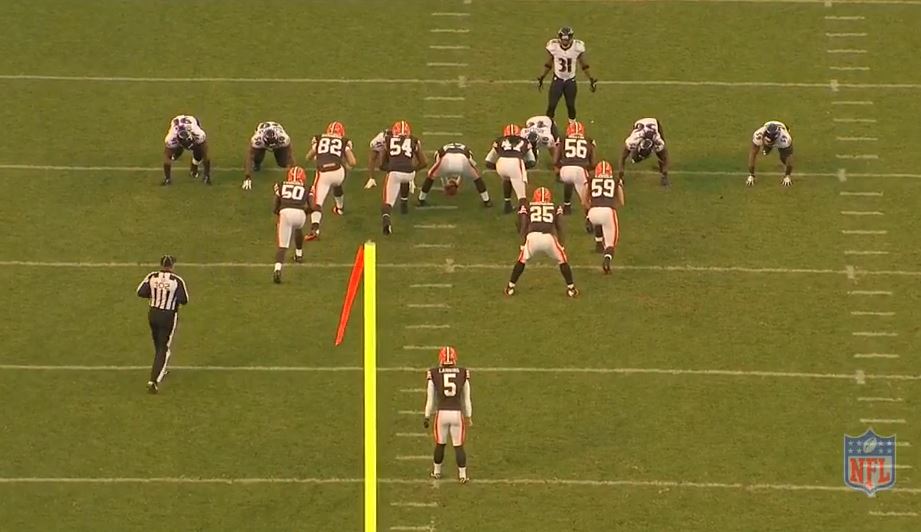 We've had a lot of shifting of personnel at the left wing position, but against Baltimore and Cincinnati, we put new inside linebacker Darius Eubanks there. TE Gary Barnidge has consistently been at left tackle. The left guard position is supposed to be meant for OLB Quentin Groves, but he is on IR now. That means a newcomer, ILB Craig Robertson (who suffered a knee injury early against the Bengals), had to replace him at that position.

The right wing position was typically manned by RB Chris Ogbonnaya, but OLB Barkevious Mingo was in that role for the first time during this five-game stretch of the season (I did not check if he had played there before that stretch of games). Lastly, since S Josh Aubrey landed on IR, we've seen S Tashaun Gipson and RB Chris Ogbonnaya both take some turns as the personal protector.

To summarize, the injuries to Aubrey several weeks back, and most recently the injuries to Groves and Gray, caused our protection to be shuffled quite a bit against the Bengals, and they found a way to expose us.

Now, here is a breakdown of what happened against the Bengals (note: All-22 footage is not available yet, so this is from the CBS broadcast replays): 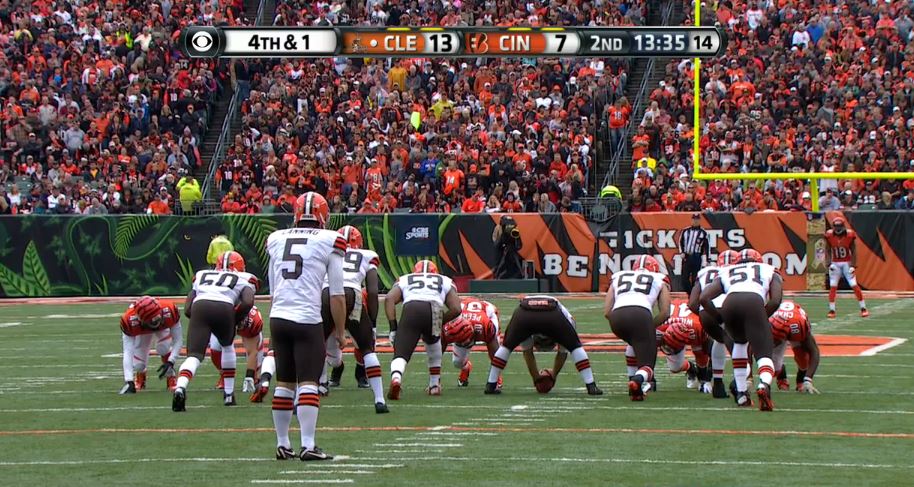 The Bengals line up with eight players set to pressure Lanning, matching our right players in protection. That means if everybody rushes, none of our guys should be leaving early to go downfield. Pay attention to the Bengals' No. 40, who is lined up over our No. 59. 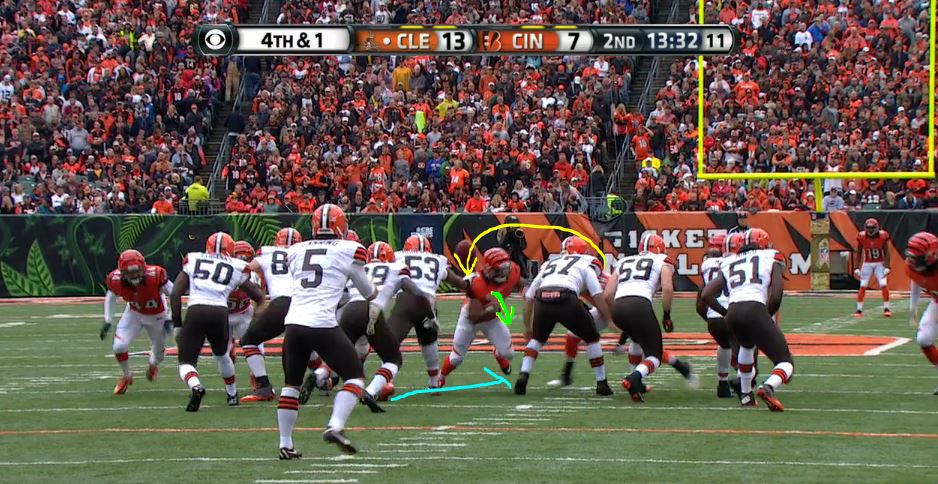 The first thing that somewhat goes wrong here is that Yount delivers an imperfect snap -- it tails to Lanning's right a little bit, which might delay him a hair from getting the boot off. There still ends up being a protection issue, but it might have been the difference between a "deflected" vs. a "oh, he came close to blocking it" punt.

No. 40 of the Bengals (from the previous screenshot) is going to loop around, and he is the one who ultimately gets the deflection unblocked. Yount wants to block this guy when he first stands up, but the guy with the green arrow acts as a pick of sorts and shoves Yount aside. The personel protector, Tashaun Gipson, sees the green arrow guy shooting through and races up to block him. The vacancy allows No. 40 to get a free rush at Lanning.

Who is to blame here -- Yount? Gipson? Someone else? I'm far from an expert on punt protection, but I wonder if Gipson shouldn't have charged up as fast as he did to block the guy with the green arrow. If Gipson shifts to his right vs. charging up, he might have been able to get in the way of the yellow rusher just enough to allow the punt to get off. Yount also seems to deserve some blame here. When asked about the snap after the game, here is what Yount said:

"I haven’t seen the film at all," Yount said. "I just go on the feedback and what people are telling me on the sidelines. From what I’m told, [the snap] didn’t affect it."

Punt Blocked & Returned for a Touchdown 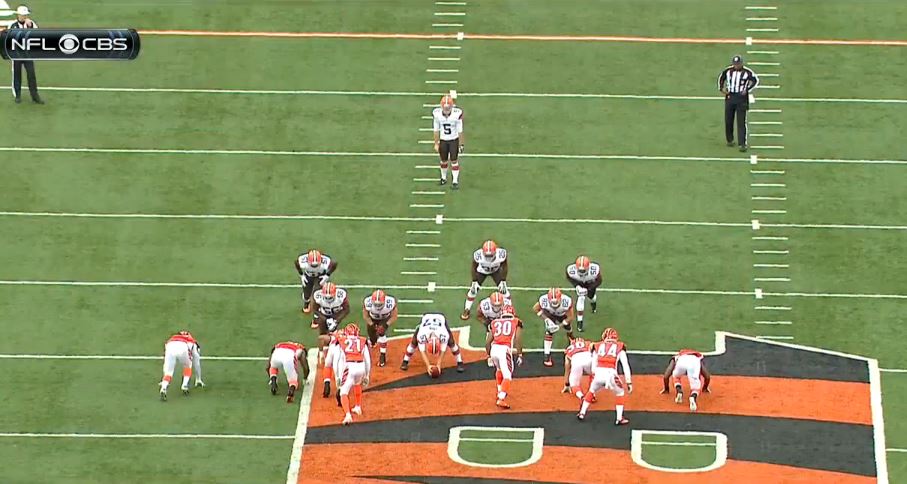 The Bengals are actually going to less players than the previous time, as the two guys in the back stagger near the line of scrimmage, so this is a six-man rush of sorts. My opinion is that RB Chris Ogbonnaya, who has replaced S Tashaun Gipson as the personal protector on this play, should be paying attention to those second-level guys in case they try to shoot through a gap. Pay attention to OLB Barkevious Mingo, who is playing the right wing position and is on the left side of the screenshot above. 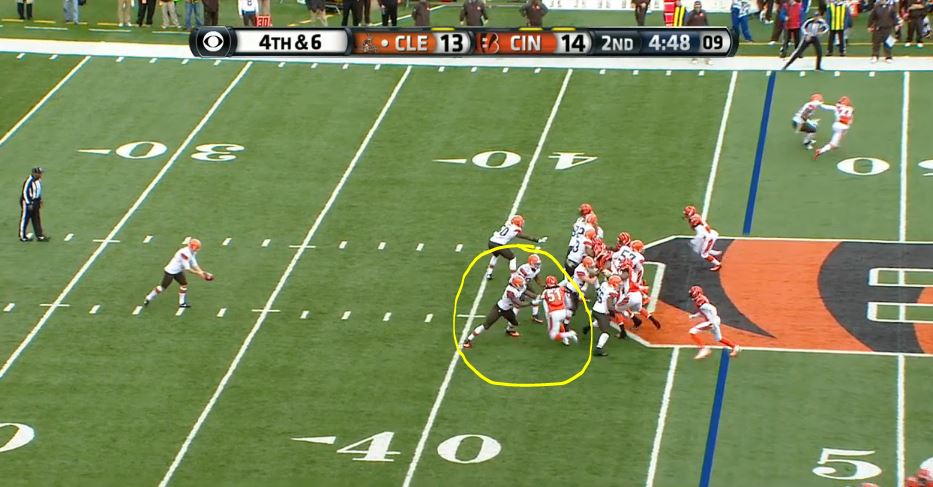 No. 51 of the Bengals comes for a rush, and Mingo is there to block him. You wouldn't think this play has any chance of being a blocked punt at this point, as long as Mingo just gets the slightest of chips. 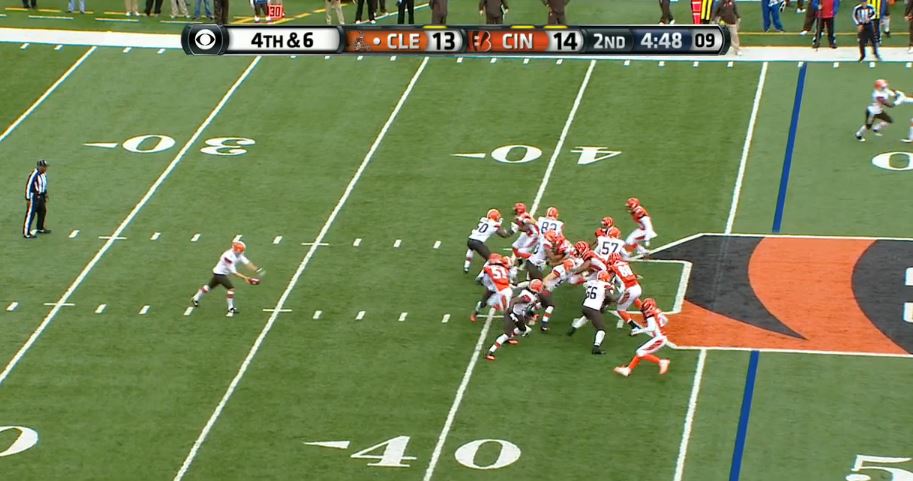 For whatever reason, Mingo doesn't even give the slightest chip to the rusher. He is trying to run upfield already, presumably passing the rusher off to RB Chris Ogbonnaya. The problem? Ogbonnaya wasn't even on his side pre-snap. 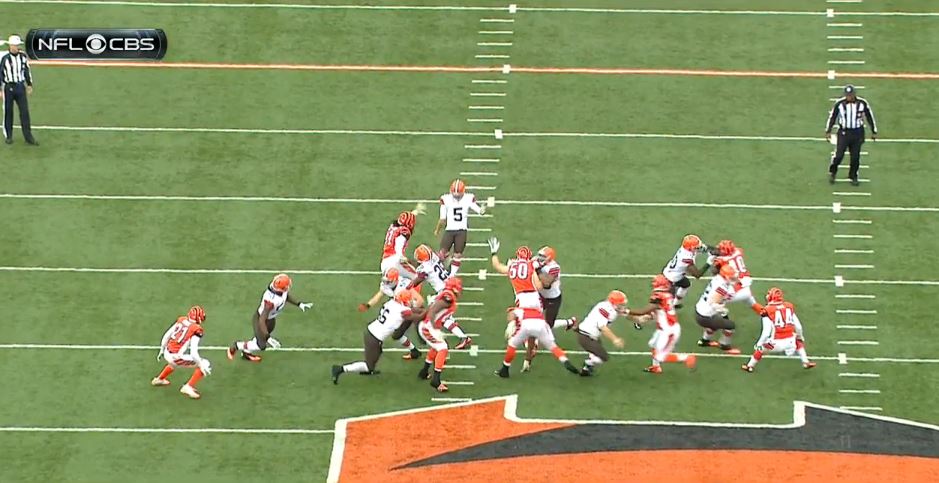 Ogbonnaya sees the guy get a free pass on Mingo, but there's nothing he can do about it -- the guy is coming with a full head of steam, unblocked. The screenshot above captures perfectly how the defender's hand is ready for the block just as Lanning is punting the ball. After the game, Mingo and Ogbonnaya explained the play the best that they could to the Akron Beacon Journal:

"That’s my responsibility," said Mingo, the sixth overall pick in this year’s draft. "I didn’t do my job in that instance. The guy made a great play, blocked a punt, [Dye] picked it up. I’ve got to do better than that."

Added Ogbonnaya: "It looked like a breakdown in protection. I felt a guy coming from my right side. Until I see the tape I don’t know what happened, if there was a miscommunication on the line or whatnot. But we’ll get that sorted out."

Overall, the punt protection issues cost the Browns the game, as they ended up leading to 14 free points for the Bengals. If the punts had gotten off normally, there is no doubt in my mind that Cleveland wins the game -- Cincinnati's offense could not drive the ball for squat. Heck, here's a stat that may floor you: the Bengals were just 1-of-14 (7%) on third down. Ugh.

Special teams coordinator Chris Tabor will have to find the right personnel to compensate for the team's injuries on the punt protection unit and get things patched up fast. It's not difficult to do, so I don't think this will become a recurring issue. Because of that, we should still be somewhat optimistic about our chances of landing a wildcard spot in the AFC.