With potential division hopes on the line on Sunday, the Browns went into Cincinnati and flat out laid an egg. The special teams was awful, the offense wasn't great, and the defense had to compensate for both. All together it was a bad loss for the Browns whose division and playoff hopes are in serious jeopardy.

I don't know why I do this to myself. Going into Sunday's matchup with the Bengals, I really had high hopes for the Browns. It was a pivotal game in which they were facing the AFC North leaders and could really take a swing at the division. Instead, miscue after miscue and now I'm left wondering what could've been.

It started out great for the Browns, but a 31-point second quarter by the Bengals did the Browns in. I'll take a look at how on earth they gave up 31 in one quarter, as well as the rest of the tough to watch game. 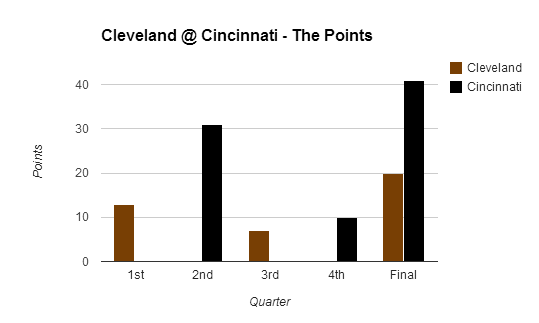 After the teams traded a few three-and-outs to start the game, Cleveland took over the first quarter. On the second drive of the game, Chris Ogbonnaya ripped of a 43-yard rush that set the Browns up in Bengals territory. Cleveland would then get to the 2-yard line where they had first and goal. On second down, Jason Campbell was pressured and forced to his right, but he missed a WIDE open Jordan Cameron in the back of the endzone. Campbell's miss there, would set the tone for the day. On the very next play, third and goal, Campbell again missed a WIDE open receiver, this time Greg Little. Campbell's pass was actually batted at the line of scrimmage, but all he had to do was loft the ball over the line and anywhere near Little, and he had an easy touchdown. Instead, the Browns had to settle for a 20-yard Bill Cundiff field goal, to take a 3-0 lead.

On the first play of the ensuing Bengals possession Andy Dalton threw behind A.J. Green and Joe Haden was right there for the interception. Haden would return the interception down to the Cincinnati 12-yard line, giving the Browns offense great field position. However, the Browns offense couldn't capitalize, and again had to settle for a Billy Cundiff field goal. They'd go up 6-0.

On the second play of the Bengals next possession, Andy Dalton again looked A.J. Green's direction. The result was the same, a Joe Haden INT, except this time Haden housed it for the TD. The Browns would jump out to an early 13-0 lead.

The Browns defense would again stand tall and the offense got the ball back with under a minute to play in the first quarter. On the first play of the ensuing drive the magical first quarter began to lose it's magic. Jason Campbell's pass was tipped at the line and James Harrison intercepted the pass. Harrison would actually return the interception for a touchdown, but it was called back for an illegal block in the back. The penalty didn't help the Browns much as Andy Dalton would find Jermaine Gresham for a touchdown just two plays later. We've talked for weeks about the mismatch problems teams are seeing with tight ends against our linebackers, and the Gresham TD was the same deal. Craig Robertson was beat by Gresham, and then it was pitiful tackling that lead to Gresham walking into the endzone. The Bengals would cut the lead to 13-7.

The Browns would go three and out on the next drive, but the real issue came on 4th down when the Browns punt attempt was tipped and went all of 9 yards to give Cincinnati great field position. The Harrison INT, then the tipped punt were just appetizers for more miscues later.

The next drive for the Bengals featured a trick play where Bengals WR Mohamed Sanu threw a (beautiful) pass to Giovani Bernard for 25 yards that would then set up a Sanu TD reception. That TD gave the Bengals their first lead of the day, 14-13.

As I mentioned, the Browns errors were just getting started. With under 5 minutes to play in the first half the Browns were nearing midfield but the drive stalled and they were forced to punt. This time the punt was not tipped, but fully blocked, and the Bengals were able to return it for a touchdown to go up 21-13.

Not long into the Browns ensuing drive Chris Ogbonnaya caught a swing pass and then was drilled by Vontaze Burfict who caused a fumble, which he scooped and returned for the touchdown. Cincinnati would take a 28-13 lead.

On their last drive of the first half, the Browns couldn't do anything and were forced to punt. Adam Jones would have a great return that would set Cincinatti up at Cleveland's 32-yard line. The Bengals would get a completion and enough yards to tack on a 41-yard Mike Nugent field goal. The Bengals would take a 31-13 lead into the locker rooms.

On the Browns second drive of the third quarter they finally got a big play they needed. Jason Campbell heaved a beauty up the sideline to Josh Gordon for a 74-yard touchdown reception. That catch gave us some ill-fated optimism, but nevertheless the Browns would be down 31-20 with just under 10 minutes to go in the third.

As previously noted, there were tons of miscues by the Browns in the first half. I personally think one of the biggest miscues of the entire game came on the Bengals ensuing possession after the big Josh Gordon TD. The Browns were only down 11 at the time, and they stopped Cincinnati and the Bengals were facing a 4th and 2. That's when Armonty Bryant jumped offsides on the punt and gave the Bengals a free first down. Now, I understand that the Bengals eventually would have to punt after the Browns stopped them again, but that was after the 5 yard penalty and about 15 yards of the Bengals drive. The Browns would take over their next drive at their own 20 after the touchback, but for the field position battle and mental psyche of the team, I think that penalty was really bad.

The Browns got the ball hoping to make a comeback, but the wind and rain had really picked up at this point. The Browns would eventually turn it over when Campbell's pass intended for Greg Little was picked off, essentially ending all hope.

To start the fourth quarter the Bengals took to the ground and put the ball in BenJarvus Green-Ellis' hands to grind it out. They'd find the endzone on an Alex Smith 2-yard TD catch, but it was Green-Ellis who shouldered the load. He carried the ball 5 times for 37 yards, and the drive was just 50 yards. The Bengals would go up 38-20.

Midway through the fourth, Jason Campbell was sacked on fourth down and the Browns turned it over on downs at their own 21-yard line. The Bengals would add a field goal and would go on to win 41-20. 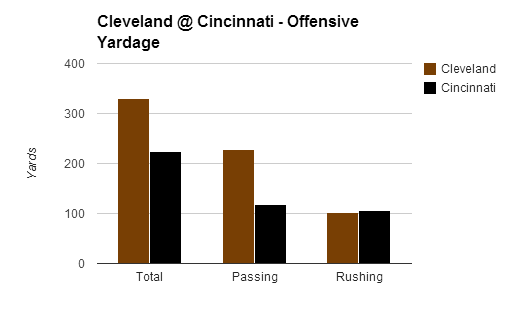 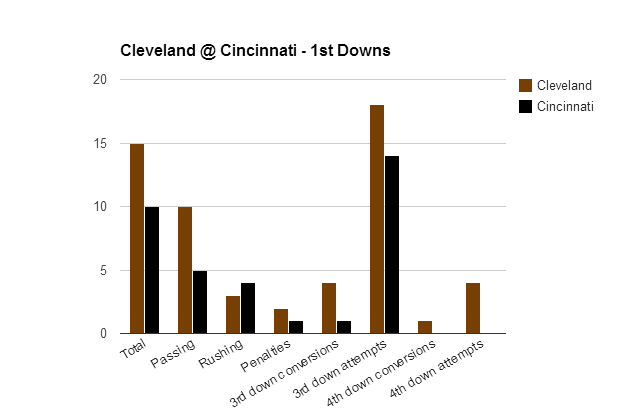 Going into Sunday's contest against the Bengals I had high hopes that the Browns would come out victorious and situate themselves for a fun run at the division/playoffs. My how the tables have turned. It couldn't have started better for the Browns, well positioned on early drives to put up TD's, a defensive touchdown, and a 13-0 lead on the road against the division leading Bengals. Then it all collapsed with a 31-point second quarter. All of a sudden we're back to talking about the draft and who our QBOTF will be.

The season is far from over, but the Browns certainly did themselves no favors losing to the Bengals in a game which meant so much. The Browns now have the Steelers and Jaguars at home before hitting the road for New England. These next two weeks are HUGE for the Browns. I thought Sunday was a must-win for the Browns, and they laid an egg. Sunday at home against the Steelers is truly another must-win. And then we're looking at the Jaguars, which if the Browns lose to the Jaguars, well....I don't even want to think about that.

For now, we've got to worry about Pittsburgh. It should be a good game Sunday and it'll be interesting to see how this team responds to the thrashing they received in Cincinnati.