After laying an egg in Cincinnati, I was hoping the Browns would come back to Cleveland re-energized to take on another division rival. Unfortunately the Browns laid another egg against the Steelers.

I fancy myself a truly dedicated fan. I read as much as I can about the team. I watch videos. I listen to podcasts. Etc, etc, etc. And when it comes to gamedays, I am as invested in my watching of Browns games as many of you are. It takes a lot for me to feel like turning a Browns game off. Sunday, was one of those few games where I just felt like I couldn't bare watching the end.

Unfortunately for my eyes, I pressed on and watched the Josh Gordon Garbage Time Show carry on until the bitter end. So let's just rip that band-aid off and take a look at the wound(s). 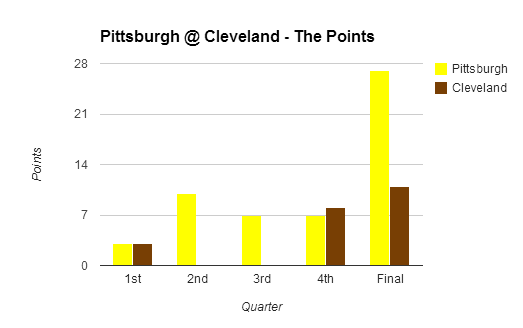 The Pittsburgh Steelers got the ball to start the game and put together a decent drive before stalling and attempting a field goal into the wind. On their first possession the Steelers would jump out to a 3-0 lead after the 47-yard Shaun Suisham try.

The Browns responded with a (wind aided) 49-yard field goal of their own from the foot of Billy Cundiff to tie the game a 3 apiece.

The a better part of the rest of the first half was a battle of field position and general sloppy cold-weather play.

With just over 3 minutes to play in the half, the Steelers got the ball with good field position, just shy of midfield. Ben Roethlisberger connected with Emmanuel Sanders for 11 yards, then hit Antonio Brown for 41 yards and a touchdown on the next play. I would like to take issue with one thing about the Brown TD grab. Joe Haden is stride for stride with Antonio Brown. About halfway through the route though, both Brown and Haden turn their heads back towards the play. The problem is, Haden slows up just slightly, but Brown doesn't and continues to run right past Haden. Haden said after the game that he "thought (Brown) was going to stop." Ultimately Haden recovered nicely and almost broke the play up, but Brown recovered the ball perfectly placed on his chest. That was a key point in the first half as the Steelers would take a 10-3 lead.

Another pivotal point in the first half came on the Browns ensuing possession. Jason Campbell hit Josh Gordon twice on the drive for nice chunks of yards before Chris Ogbonnaya would get a good 8-yard rush, but fumbled by way of a Troy Polamalu strip and recovery. I've been clamoring for weeks to get Obi more touches, but that now makes it two-straight weeks with a fumble. At this point he looks like our best rushing option, however he has to hang on to the ball to warrant those increased touches.

After the Ogbonnaya fumble the Steelers were again set up with good field position. They'd get into the redzone, but the Browns defense held and forced a field goal. Suisham would connect again and the Steelers would go up 13-3 heading into halftime.

The Browns went three-and-out on their first possession of the second half, but when they got the ball back a second time is when the train really started to come off the tracks. The Steelers had just gone for it on fourth down, but the Browns held. The Browns had good field position and after a couple decent plays looked to be threatening. That's when Jason Campbell was sacked and fumbled. William Gay came free off the edge and drilled Campbell, Will Allen then scooped the ball and returned it 49-yards almost for 6, but Ogbonnaya stopped him at the Cleveland 4-yard line. Gay delivered the shot right to the head of Campbell and that was ultimately what forced Campbell to the locker room early. One would suspect that Gay will be hearing from the league office about that hit to the head. The Steelers would score on the next play to go up 20-3.

With Campbell forced out of the game, it was once again Brandon Weeden time. It was the same old Weeden song and dance. With just over 6 minutes to go in the fourth quarter, Weeden was sacked and fumbled, recovered by Pittsburgh. Then, on his next series, was picked off by William Gay, returned for a Pittsburgh touchdown to go up 27-3.

Brandon Weeden came back out and threw almost exclusively to Josh Gordon in garbage time. Eventually Weeden found Gordon for a 1-yard touchdown with a little over 3 minutes to play. Weeden would also find Davone Bess on the two-point conversion to make it 27-11, where it'd stay the rest of the game. 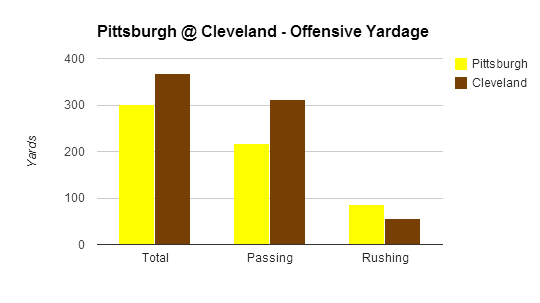 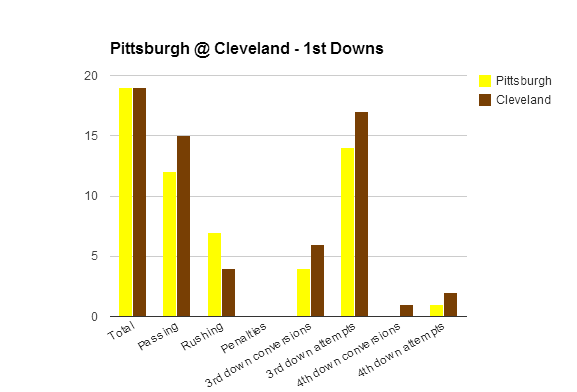 Sunday was not fun for anyone fans of the Brown and Orange. There weren't many bright spots, and it was one of those games that from the start, felt like the Browns just didn't have it. As I mentioned I very rarely feel like turning the games off, but Sunday was one of those rare instances. I ultimately didn't do it, but the more I watch this team, the more I realize that they're not ready to contend (yet). It was fun to hypothesize about how we might make the playoffs, and who knows they might rip off 6 in a row and make it, but it's incredibly unlikely now. That's not to say that they're 3 years away  and we need to rebuild, etc. I just think we need to see some further development and add some pieces before we really can get excited about this squad.

The truth is, as we get further into this season, the holes are becoming more glaring. Holes I thought would be better, are now showing that they will definitely need addressed this offseason. I thought the receivers would be better, but that doesn't appear to be the case. I thought the offensive line was ready for a breakout year, but they look bad right now. I thought the defense would pressure the quarterback like madmen, but the pass rush is nonexistent recently.

I could go on and on with other examples, but that's no fun and it's depressing. The Browns now have 5 games remaining in the season. Up next is Sunday against Jacksonville at home. The Jaguars were the laughing stock of the NFL for 8 weeks, but have now won 2 out of their last 3 games. It'll be an interesting test for the Browns at home on Sunday. I still think they'll win, but my gut is not as confident as I was a few weeks ago. The last few weeks of this season will be critical for the front office to take a look at what they have, address needs and holes, and get the right gameplan ready for next year. With two first round picks in the upcoming draft, this is a make-or-break offseason for this front office.