Our Post Season Ambitions have gone out the window. What should we turn our attention to the rest of the way? 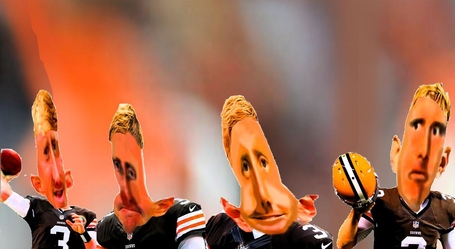 The Loss to the Steelers and the Elimination from the Post Season stung.  And it took quite a while to sink in.  You spend all Pre Season and Training Camp preparing to win.  And then you´re in the thick of it, during Regular Season.  We had chances, and I was highly optimistic.  And pleased with our Intrepid Attitude.  Then it was over.  Just like that.

So, I´d like to put some thought into, where we go from here.  What can we concentrate on, to get the most out of the rest of the season.  I came up with a few ideas, regarding our Club Culture and Team Attitude...

It´s rough, because players make friends.  There is a feeling of having fought in the trenches together.  But, this is Professional Sports.  The Financial Validation Process is geared to an Elite Selection Process.  It´s so we can call the Super Bowl super.  Why encourage people to do their best otherwise.  Some people scout only the Winners.  I like to keep my eyes peeled for that rare breed.  Irrascible Types.  Unbeatables.  Winners on Losing Teams.  Who are the Kindred Spirits of Hope and Faith on our Team?  Who displays Courage under Fire.  Who do we have to convince to not go galavanting off to the next best Winning Team?

How we play it, gets us who plays it.

I´m a firm Believer in good fundamentals.  I believe in Coaching.  And training yourself according to high standards.  What´s the Browns Football Way?  Who and what do the Die Hard Fans copy in Sand Lot Games and Pick Up Games?  What´s our brand of football?  Buster Skrine stands out this year.  He made himself into something.  I´d hate to see his How be replaced with a Who.  But, that´s the basic spirit.  Once you like what you see, you can go shopping to best fill those shoes.  Who deserves a commendation for setting those shoes to be filled up?

This is prestige.  It´s Pride and Honor.  What are we putting on the field?  Are they Browns Types?  When players leave us, do they display our Brand of Football?  Can we be proud, that they represent us?  Can we instill something special.  Something that lingers in their souls?  In their spirit?  Make them say, there´s more where that came from?

And that´s the Call for more Graciousness.  Can our former affiliates.  Our creatures and monsters, so to speak, achieve success somewhere else?  Can we overcome Primitive Urges?  And cheer them on, even in a Different Uniform.  What is this?  The land of plenty?  That´s not the point.  Shouldn´t it be a matter of pride to have been a Cleveland Brown?

Looking at our roster.  Wouldn´t it be better to have 5 Awesome SEC Players from different schools.  Than having one so-so Player.  And four more from his school as Back Ups.  I think we need to maximize the potential of fielding Prospects, that represent their Alma Mater as much as they further our causes.

Once again.  Great franchises aren´t born, they are created.  Integrity and Originality pay off in the long run.  You can´t buy respect.  Great executives, are good leaders.  Honest and Earnest.  Exemplifying the best human qualities.  You don´t revel in improving players playing for sub standard contracts.  Top Dollars for Top Play.  Sure, you gotta bring them along, when they´re new.  But, we all benefit, when the salary reflects the production.  This isn´t the Stock Market Hobbyist Club.

In House Scouting, own evaluations.

I enjoy our own discoveries more, than the clear cut favorites.  The reward is much higher too, if you can establish them too.  It´s good if your Scouts travel and make names for themselves also.

Any tradition was once new.  New ideas must merge and mesh with old traditions.  Culture comes from cultivation.  You focus on good spirit.  And you make it grow.

Value and vie for Talents from other Teams.

How can you not express interest in the best?  To act uninterested is a weird kind of complacency approaching Self Agrandizement.  We´re above this.  That´s the most exciting part of the game.  Can we attract Prime Players?

You gotta know when you got something special.  And you plan for them.  You dread letting them go.  I like Armonty Bryant, Billy Winn, Tank Carder, Joe Haden, Buster Skrine and Tashaun Gipson on Defense.  Don´t act non chalant about it.  There are 31 other Clubs, that are doing their Homework.

D´Quell Jackson.  Ahtyba Rubin.  Is that all.  We should have gone back, and gotten some of Romeo Crennel´s Boys.  Then Mangini´s.  Then Shurmur and Heckert´s.

I don´t know about you.  But, I feel confident about Mike Lombardi and Joe Banner.  But, I also thought we should have found a way to keep Tom Heckert.  I consider this a failing.  If Haslam sells, I will also measure us, by whether we can hang onto Lombardi and Banner.