Cleveland took down Baltimore to end an 11-game losing streak to the Ravens. Jason Campbell was solid, the defense was stout, and Davone Bess redeemed last week's blunder. I'll review how win #4 came to be.

The Cleveland Browns had not beaten the Baltimore Ravens in 11 games (or 6 years). Sunday they squared off against the defending Super Bowl champs for the second time this year, this time getting the victory at home. Cleveland won an incredibly entertaining game 24-18. The win also snapped a 3-game losing streak this season, as well as moves the Browns just 2 games out of first in the division.

All together it was a fun victory for the fans, the coaches and the players. Beating the Ravens is always great, especially now that the Browns have the 11-game streak off their back. Cleveland can now look forward to getting healthy on the bye week, but before we get there, let's take a look at how Sunday's win came to be. 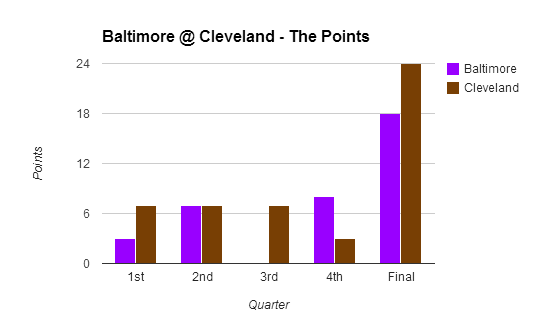 On the Browns second possession of the game Campbell was able to find Greg Little for 32 yards on a pass that was into double coverage, yet Little came away with it, surprisingly. Campbell also hit Josh Gordon on the drive for 27 yards. The big plays put the Browns inside the Ravens 10-yard line, first and goal. It took the Browns all four plays, but on 4th and 1 at the Ravens 1, Campbell found Davone Bess for the 1-yard touchdown. The Browns would get on the board first, up 7-0.

The Ravens responded on the ensuing possession with a good drive of their own and found themselves nearing the Browns redzone. On 3rd and 6 however, Quentin Groves registered the Browns first sack of the day and forced the Ravens to settle for a Justin Tucker 51-yard field goal, making the score 7-3.

Cleveland would play a good field position battle for the next couple possessions and got the ball back early in the second quarter with good field position at their own 47-yard line. Campbell hit Little on the drive 3 times for 37 yards. The Browns also overcame a Greg Little 15-yard penalty, his second of the game. On 3rd down at the Ravens 20-yard line, Jason Campbell found an open Davone Bess who then put an absolutely filthy juke on Lardarius Webb and Bess was able to get into the endzone for his second score of the game. The Browns would take an early 14-3 lead.

Late in the second half we saw the Browns engineer yet another ‘Browns' way to end a half. After the Browns were forced to punt with a little over a minute to play in the first half, the Ravens would take over at their own 33. Armonty Bryant would sack Joe Flacco on the first play, and a short 3-yard reception by Ray Rice would make it 3rd and 8 with 30 seconds to play. That's when Torrey Smith got his first reception of the game, a catch that would go for 46 yards. I'm not really sure what on earth Tashaun Gipson was doing in coverage, but it was bad. Two plays later Flacco would find Marlon Brown for a 19-yard TD. The Ravens would pull within four, down 14-10.

After the ensuing kickoff, the Browns had the ball at their own 43. They'd then take a delay of game penalty with a timeout in their pocket, moving back 5 yards. Campbell then hit newly signed Armanti Edwards for 10 yards, and then took their timeout at their own 48-yard line. The hail mary to end the half would fall short, but the play calling/clock management at the end of the half was rather suspect. At any rate, the Browns would take a 14-10 lead into halftime.

The Ravens would come out and convert a couple third downs and get within threatening distance. The Browns defense responded again however and T.J. Ward sacked Flacco to push them out of field goal range and forced the Ravens to punt on their opening possession of the half.

Cleveland then caught a huge break on their first possession of the second half. After their drive fell a yard short and elected to punt, Tandon Doss muffed the punt and the Browns came up with the recovery. Two plays later Jason Campbell found Gary Barnidge for the 4-yard touchdown to go up 21-10.

After a quick three-and-out from the Browns, the Ravens got the ball back to start the fourth quarter and got a big punt return from Tandon Doss for 36 yards. Joe Flacco was a perfect 4-for-4 on the drive and found Marlon Brown for a 7-yard TD. The Ravens also went for, and converted on the two-point conversion to cut the Browns lead to a field goal, down 21-18.

Cleveland got the ball back with a little under 7 minutes to play in the fourth quarter. The Browns were then facing a 4th and 1 at the Ravens 43. The Browns elected to go for it. Campbell was flushed from the pocket, and in an eerily similar play to last week's critical 4th down play, threw to Davone Bess coming back to the ball. This time Bess came up big and caught the pass, and got just enough to get the first down and extend the drive. The Browns also got big plays from Chris Ogbonnaya with catches of 17 yards and 14 yards on the drive. A horse-collar tackle on the second of the Ogbonnaya catches put the Browns at the Ravens 4-yard line, 1st and goal. Three straight Willis McGahee rushes got them nowhere, and the Browns elected to play it safe and tack on a field goal to go up 24-18 with just 17 seconds left. 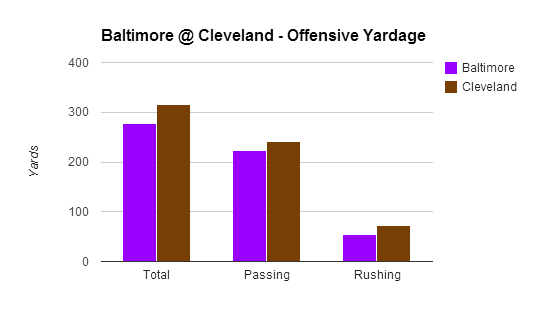 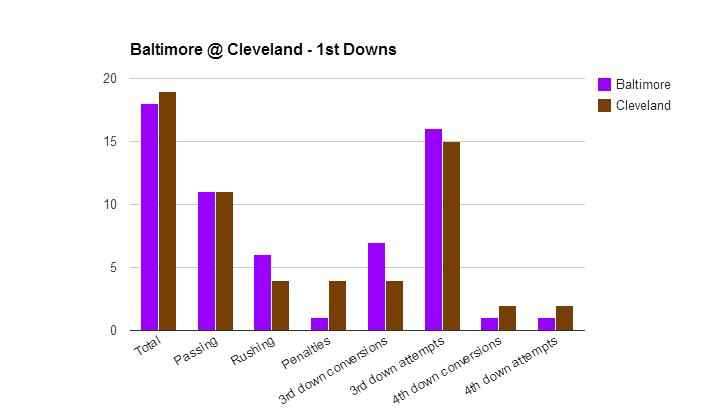 This win couldn't have come at a better time for this Browns team. They beat a division rival in the Ravens for the first time in 11 tries, and then get to hit the bye week before traveling to Cincinnati. The Browns can now get healthy and will have two weeks to prepare for the Bengals. With the Browns trailing by two games in the division the game in two weeks will be huge. The Browns dug in on Sunday and toughed out a victory. It'll take another big performance to take down the Bengals, but they've done it once already this year. The Bengals lost to the Dolphins Thursday, and will now travel to Baltimore on Sunday.

With everything that has happened to the Browns this season, a win against the Bengals could be the spark this team needs to bring it all full circle. I'm very excited to see if the Browns can pull off a repeat performance. Heck, I might even head up to Cincinnati to watch it unfold!