With the Cleveland Browns on the bye this week, it's time to review how the offense, defense, and special teams units have performed in comparison to my expectations heading into the season. We'll start off with the offense, where head coach Rob Chudzinski and offensive coordinator Norv Turner have taken over, replacing the Pat Shurmur and Brad Childress offense.

Except for rushing and pass protection, the Browns' offense is up in every statistical category mid-way through the 2013 season, compared to the 2012 season. Those two negatives shouldn't come as a surprise -- fans have witnessed the team's inability to run the ball in every game this season, and the pass protection when Oniel Cousins started at the beginning of the year was dreadful.

All of the other categories are up. Many of the gains are marginal, but the one that stands out is the team's red zone efficiency, as they are scoring a touchdown 61.9% of the time when they get inside the 20 yard line. We are settling for less field goals than a year ago.

I was curious about the difference in red zone efficiency between the starting quarterbacks this year, considering we've had three of them. Based on the NFL game logs, QB Brandon Weeden was 5/11 in the red zone (45.45%), while QB Brian Hoyer and QB Jason Campbell combined to be 8/10 in the red zone (80%)*. Granted, it is a limited sample size, but this is a situation where I feel a limited sample size still holds a lot of weight. With Weeden, we'd be near the bottom of the NFL in red zone efficiency; with the other two guys, we're right up their with the league's best, even without a credible running game down there.

*Credit Spencer Lanning for one of those conversions. 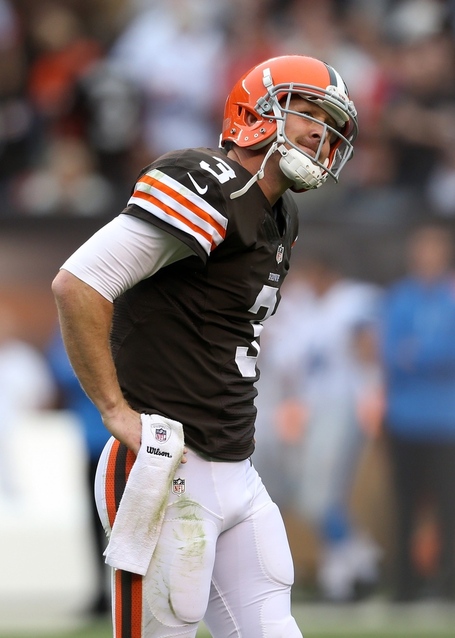 What? How is it possible for a position to be both below expectations and at a level where it has exceeded expectations? Because that is how ass-backwards our quarterback situation ended up being.

QB Brandon Weeden, entering his second season with the team, was given all of the starting reps throughout training camp and the preseason, and not many people questioned it. He looked fine in those situations, but mind you, that is when you don't have teams blitzing you or a stadium full of fans on edge when you make a bad decision.

Weeden's competition didn't seem too threatening: you had QB Jason Campbell, a veteran backup who seemed to be done as a starter in the NFL, and QB Brian Hoyer, who simply had the "Michael-Lombardi-intrigue."

Through nine games, it's clear that the Browns had things in the wrong order. Weeden has regressed big time, and defenses have an easy formula for beating him: just pressure the hell out of him and cover his first read. Worse yet, there were too many instances in which Weeden started missing wide open receivers (the wheel route to Chris Ogbonnaya), or made just flat out stupid decisions at crunch time (the 40-yard flip pass to Chris Ogbonnaya).

Even though the record books will count the Bills game as a start by Hoyer, we'll give that one to Weeden: with that in mind, Cleveland has a 1-4 record under Weeden this year, and he had 5 touchdown passes and 6 interceptions in those games.

Things were dramatically different under Hoyer, and now Campbell. As I mentioned in the statistical section above, the red zone efficiency has been great without Weeden. In two games, Hoyer was 2-0 with 5 touchdown passes and 3 interceptions. In two games, Campbell is 1-1 with 5 touchdown passes and 0 interceptions. He almost beat the undefeated Chiefs in that one loss. Both of them have released the ball quicker, which has helped reduce the number of sacks the offensive line is yielding.

At the beginning of the season, I tried to make excuses for Weeden, such as the absences of WR Josh Gordon and OG Shawn Lauvao (or OG Jason Pinkston) being the reasons the offense was struggling. When both players returned, Weeden still looked terrible. When Weeden was out of the lineup, the offense actually looked like an NFL offense.

I don't blame the offensive coaching staff for getting the quarterback position wrong in camp: Weeden was a first-round pick in 2012, and he needed to be evaluated in the regular season to see if he could be the quarterback of the future. They gave him not one, but two chances before finally benching him for good. Now, Campbell is playing the best football of his career, and that's why our quarterback situation has both fallen short of and exceeded expectations to this point.

Here are some passing directional stats for our quarterbacks by direction in 2013, courtesy of the NFL: 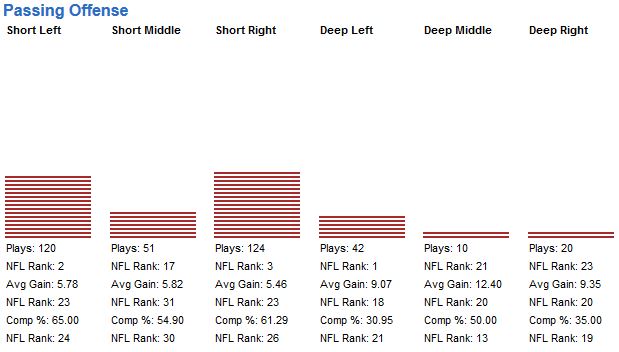 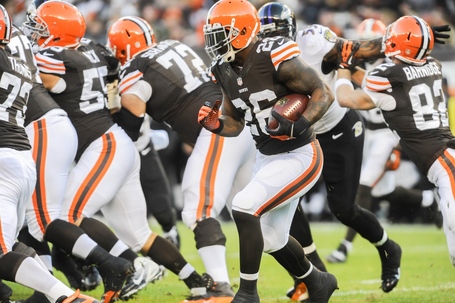 Think about this: part-way into camp, we thought our primary running backs would be Trent Richardson, Montario Hardesty, and Dion Lewis. Not a single one of them are on our 53-man roster anymore; Richardson was traded to the Colts, Hardesty was waived/injured, and Lewis was placed on injured reserve.

The three of them were replaced by combinations of running backs, but at present, the team is working with Willis McGahee, Fozzy Whittaker, and Chris Ogbonnaya. Without rehashing the whole Richardson trade, the consensus among the majority of Browns fans is that Cleveland's front office made a brilliant move in getting a first-round pick for him.

Our running game would have struggled with Richardson, but it's still struggling without him, too. The run blocking has appeared to be very poor this year. McGahee, who relies on vision rather than burst, has not been able to get past the line of scrimmage before defenders are bearing down on him. Cleveland often seems to abandon the running game from a playcalling perspective, and honestly, that's probably the right move: I wouldn't have much faith in our ability to run the ball either, based on what I've seen so far.

After the bye week, Rob Chudzinski hinted that Ogbonnaya might lessen some of his duties at fullback and might start getting more carries at running back; in essence, he would take over the starting role. Both he and Whittaker have looked good as receiving backs too, which is another area McGahee does not excel at. I don't anticipate the running game breaking out any time soon, but it would be nice to see Whittaker and Ogbonnaya get more touches the rest of the way. 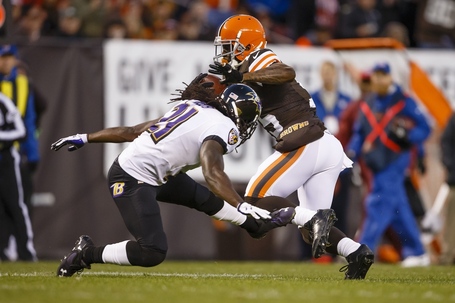 This is another tough position to judge. WR Josh Gordon has no doubt been the bright spot. He is on pace for 1,252 receiving yards and 6 touchdowns, which would be quite a feat, considering he was suspended for the first two games of the regular season. Gordon's presence instantly sparked the offense upon his return in Week 3.

The frustrating part is that trade rumors surrounding Gordon were running rampant every single week after the Richardson deal, and Gordon wasn't able to tune those rumors out. Thankfully, when the trade deadline passed, Gordon remained a member of the Browns.

WR Greg Little redeemed some of his reputation in the second half of last season when he stopped dropping passes. He followed that up with a great camp this year. In Week 2 against the Ravens, though, he dropped 3 or 4 passes in the second half and was back in the dog house. He was even "benched" for at least a week, although he still saw a lot of reps on offense. He has since reclaimed his role as a starter and is back to catching the ball very well, whether fans recognize that or not.

Although WR Davone Bess had a redemption game against the Ravens this past Sunday, in reality, that was only step one on the road to redemption. Bess was supposed to be the veteran leader of this receiving group when the Browns acquired him from Miami, but instead, he's led the NFL in dropped passes. Ouch.

Cleveland really hasn't had a fourth receiver. Even prior to the torn ACL suffered by WR Travis Benjamin, he rarely saw action as a receiver, which is not what I anticipated for him. Overall, this unit has had too many ups and downs, which I guess puts them on par with my expectations, since I never envisioned them being the most dynamic unit in the NFL or anything. 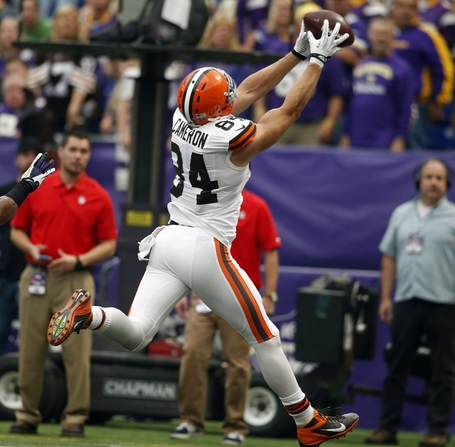 I was very cautious about the Browns' tight end position heading into the season. On one hand, I was optimistic because of Chudzinski's success with tight ends in the past. I was also intrigued by the athleticism that TE Jordan Cameron possessed. However, he had been a foot note in the offense over his first two seasons. I even wondered if TE Gary Barnidge might be the team's No. 1 tight end by the end of the season. Instead, Cameron has delivered in definitive fashion.

Cameron's stat line to this point looks pretty: 50 catches for 600 yards and 6 touchdowns. His receptions rank first among tight ends in the NFL; he is second in yardage (only behind TE Jimmy Graham) and fourth in touchdowns. I may recall one drop from him this year; other than that, he has been very reliable, including in clutch situations (the game-winner against the Vikings).

Barnidge has been utilized almost exclusively as a blocking tight end this year, but he has seen a lot of reps in that capacity. Our other tight end, MarQueis Gray, has seen limited snaps this year, with most of them coming at quarterback in the read-option. Cameron is the sole reason why the tight end unit has exceeded my expectations. 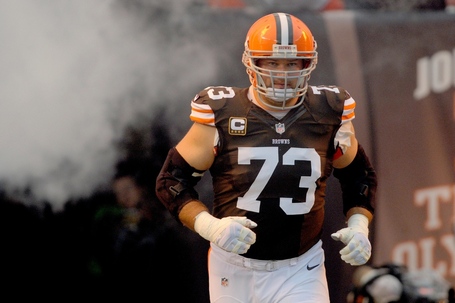 If I had to give individual assessments for the offensive line, I would say that LT Joe Thomas, C Alex Mack, and RG Shawn Lauvao are each on par with my expectations, but that LG John Greco and RT Mitchell Schwartz have been below expectations.

Schwartz has been much better since the return of Lauvao to the starting lineup, but he was really bad the first several weeks of the season, and I can't overlook that. Losing our starting right guards -- Lauvao and Jason Pinkston -- was a tough blow to start the season. I thought we could manage with OG Oniel Cousins, but Cousins was historically bad.

Right now, the big focus has to be on improving the run blocking. I didn't expect us to be a great run blocking team based on the past, but I thought we could be average. I also thought we would be one of the best pass blocking teams in the NFL, and that hasn't been the case (although it is getting better). Because of that, this is a no-brainer: the offensive line has fallen short of my expectations.

Here is the Browns' play directional report for the running game in 2013, courtesy of the NFL: 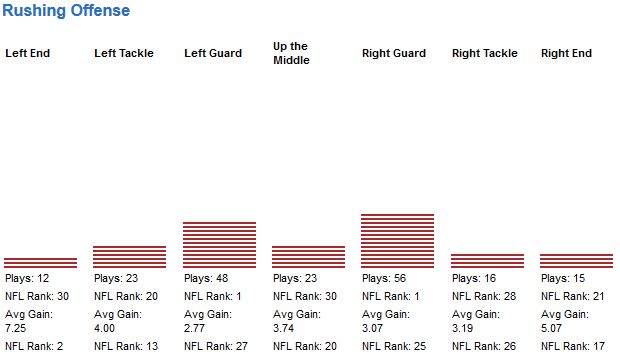 The Browns' schedule indicates that they should be a playoff contender right down to the very end of the season. Because of that, I don't expect many changes on offense. The only change I have is at running back. Despite Chudzinski saying that Ogbonnaya will get more carries, I think they are in love with him at the fullback position. Whittaker hasn't been with the team for very long, but he might be more acclimated with the playbook now and seems to be the quickest of the running backs. Campbell will need an effective check-down back in the passing game, and McGahee isn't that guy.

Let us know in the comments section what your overall assessment of the Browns' offense has been this season. Which positions have exceeded your expectations, and which ones have come up short? Do you see things getting better over the final seven games?