The Cleveland Browns brought in defensive coordinator Ray Horton this offseason. He revamped the defensive scheme from a 4-3 look to a 3-4 look, although he's always stressed that he features a multiple-front, attacking style of defense. Just how smooth has the transition gone so far? Our midseason defensive review is below; if you missed our offensive review, click here.

When you look at the Browns' defensive stats, something just doesn't quite add up. Cleveland's defensive improvements in yards allowed, particularly against the run, are staggeringly good. One statistic that isn't listed in the table above is yards per play, a category which the Browns rank No. 1 in the NFL in.

The areas that aren't even close to being up-to-par include third-down defense and red zone defense, where Cleveland is ranked 31st in the league defensively. It isn't as though one game did us in with those statistics: Horton's unit has faced those issues in every game. We saw what the defense was fully capable of in the second half against the Chiefs a few weeks ago. Despite winning this past Sunday against the Ravens, though, Baltimore converted 44% of their third downs and were 2-of-2 in the red zone. That red zone figure is driving up Cleveland's points per game average.

Horton clearly knows how to have a defense up there in the rankings, so now it's about getting his players to execute better. Horton has said that he feels the defense will finally click during the back half of the season. We'll see. If that happens and Cleveland can improve in both areas, it will be tough for anybody to beat the Browns, and they could be yielding somewhere between 3-7 fewer points per game. 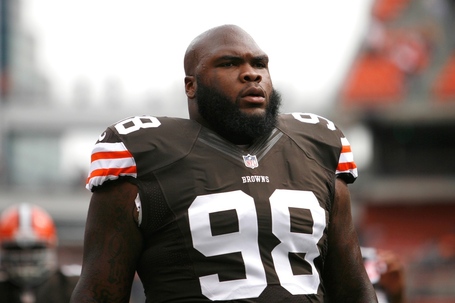 I loved the depth that our defensive line had entering the 2013 season, so for them to exceed my expectations is even more of a testament to the strong work they've done, and it all starts with NT Phil Taylor.

In my weekly snap count posts, I've complained about Taylor not getting enough snaps, but maybe I should be careful what I wish for. Taylor has been injury-free all season and playing at a high level, and the depth behind him has been stellar. Is there really a reason to push the envelope with him? Also, Taylor has acted as the enforcer presence on the defensive line -- in other words, to be frank, he is the guy who helps bring a "don't fuck with us" attitude.

DE Desmond Bryant started the season red-hot as a pass rusher, but has seemed to quiet down a bit for the past several weeks. Overall, I'm still very pleased with the offseason addition of Bryant, though. The other Bryant -- Armonty Bryant -- has seen an uptick in playing time recently and is making strides as a pass rusher. John Hughes and Ishmaa'ily Kitchen have excelled against the run. Ahtyba Rubin and Billy Winn have each missed time due to injury, but every one of those guys should be at full strength following the bye, and that's great news for the back half of the season. If someone goes down, we have the depth to pick up the slack.

Here is the play directional report of how opposing teams have attacked the Browns' run defense in 2013: 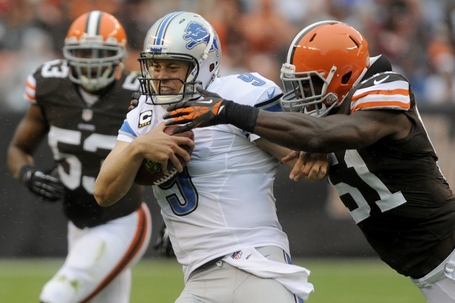 I was optimistic about the Browns' revamped outside linebacker position, featuring Paul Kruger, Jabaal Sheard, Barkevious Mingo, and Quentin Groves. That unit was built with the threat of a pass rush in mind, and it seemed like Cleveland had enough depth at the position.

Unfortunately, after a very strong start to the season, Jabaal Sheard went down with an injury (but recently returned). Also, Quentin Groves has been battling an ankle injury almost all season and seems to keep re-aggravating it.

Paul Kruger has been the only full-time starter because of the injuries. We had to overpay to get a player like him, and I had my doubts that he would be able to put up elite-level statistics. Kruger has just 2.5 sacks on the season after having 9 sacks with the Ravens as a rotational player last year. Barkevious Mingo's rookie sack total looks moderately nice with 4 sacks, but the truth is that he's made some mistakes (understandably so) against the run, and has been held in check as a pass rusher.

Here's the thing to understand: our outside linebackers, overall, have been solid for us, which is what I expected (hence, being on par with my expectations). They would've had to either do what the Chiefs are doing, or they needed to have stayed healthy the whole season, for me to rate them any higher. 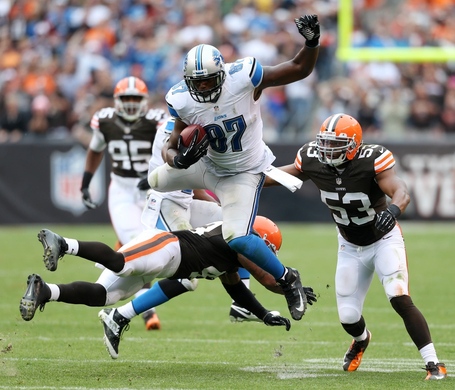 The most disappointing defender on the Browns this season, by far, has been ILB Craig Robertson. Robertson was used primarily as a nickel linebacker in the 4-3 defense last year. He didn't face much competition this camp -- James-Michael Johnson was never given a true chance to unseat him, L.J. Fort was a surprise cut, and Tank Carder is viewed as just a special teams guy.

Robertson appeared to at least be doing average until he met Reggie Bush and the Lions offense, where they exposed his struggles against covering quick running backs or tight ends in the passing game. The downward trend continued for three straight games -- all Cleveland losses -- and the Browns didn't have anyone else on the bench to go to.

At the other position, ILB D'Qwell Jackson has been rather underwhelming. He has done a fair job against the pass, but hasn't gotten to the level that Horton had Daryl Washington playing at with Arizona last year. Jackson might be better suited as the second wheel at the inside linebacker position, with his veteran leadership continuing to be a nice asset. With that said, it's hard to imagine this same tandem starting together in 2014. 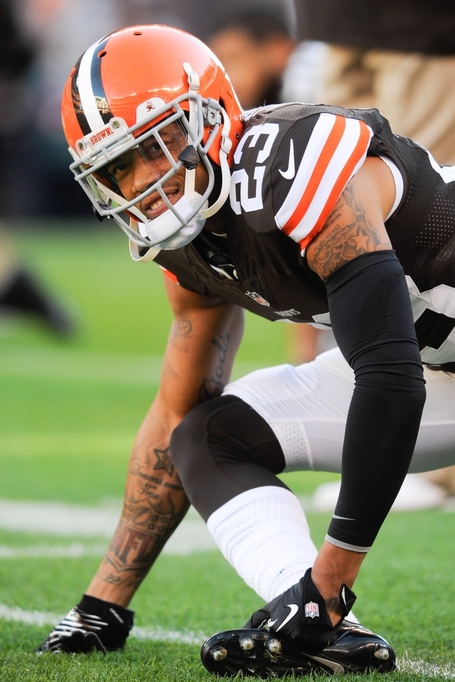 I expected CB Joe Haden to be great, and so far, he has been. He's been on par with my expectations, which is not a bad thing. The reason the cornerback position has exceeded my expectations is because of the play of CB Buster Skrine.

Heading into camp, the Browns appeared to have two nickel corners in Skrine and CB Chris Owens. While that may still be true, Skrine has been able to shake off the criticisms he faced last year when he struggled mightily as an outside cornerback.

Skrine has taken a more aggressive approach to his cornerback play and might even knock away more passes than Haden this year. Don't get me wrong -- Skrine is not playing at a Pro Bowl level, and he has still been beaten on some plays this year. However, I'd call for us to upgrade at another defensive position before I would call for a new starting cornerback.

Owens has been slightly disappointing so far. Although he has registered 2.5 sacks via corner blitzes, he has often seemed to play things very safe in coverage, a sharp contrast from what we saw in camp with him. Teams have stopped targeting Skrine and have started going after Owens more often in three-receiver sets, and for the most part, he hasn't been able to stop teams from moving the chains. Rookie CB Leon McFadden hasn't even sniffed the field for playing time.

Here is the play directional report of how opposing teams have attacked the Browns' pass defense in 2013: 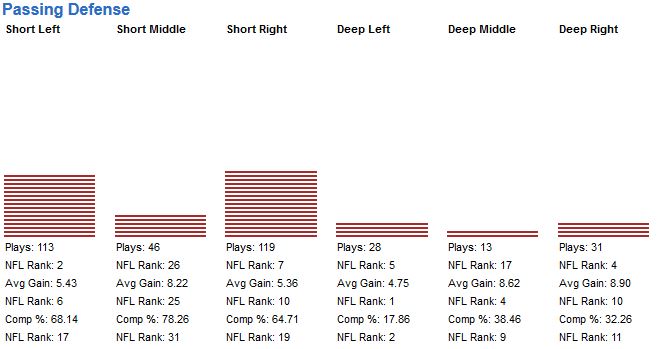 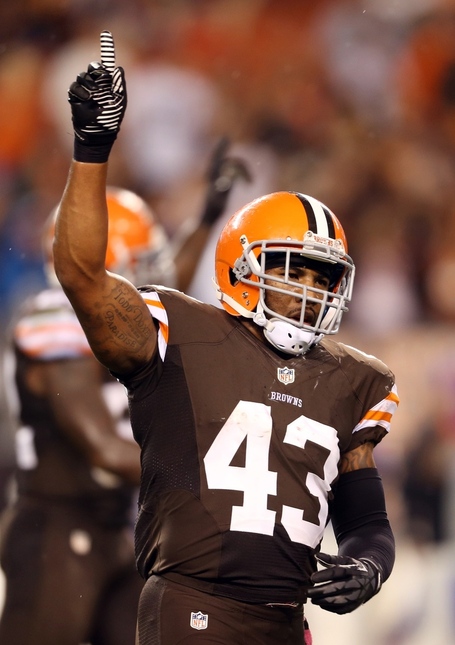 I had my doubts about S Tashaun Gipson being the new full-time starter. Yes, there was some intrigue to him after what he showed last season, but he was still an undrafted free agent who was basically being handed a starting role.

S T.J. Ward was an interesting player -- a guy who has often been deemed as "underrated," but who hasn't done enough for me to want to overpay him when he becomes a free agent. Ward has exceeded my expectations through nine games, while Gipson has just barely fallen short of my expectations.

Not only has Ward not been a liability in coverage, but I believe he is playing extraordinarily well against the run, something I have highlighted in my past few game reviews. I have to wonder if there is a better run defending safety in the NFL. It's a big-time luxury for Horton to be able to have an extra defender who can shoot up and disrupt the backfield consistently.

Gipson has mostly been used as the single-high safety to help out in pass coverage. He hasn't been terrible in that role, and has had a handful of good plays. However, the mistakes are starting to add up, including missed tackles and not being in the right position in coverage. I'm not as disappointed in Gipson as I am with Robertson, though, if we're comparing levels of disappointment.

One of the things that brought this position down is the team's lack of depth at safety. We thought Johnson Bademosi, Jamoris Slaughter, and/or Josh Aubrey would play some nice niche roles on defense. Bademosi has barely seen the field on defense, Slaughter is stuck on the practice squad, and Aubrey was placed on injured reserve a few weeks ago after not having played much defense either.

Overall, the defense is playing well enough, so I didn't need to project any changes to the defensive depth chart. If we had more depth at inside linebacker and at safety, I think we would see Robertson and/or Gipson replaced. A. Bryant has started seeing more defensive snaps, and there is a slight chance he could replace Rubin as the starter if the coaches really like what he's doing (but I wouldn't count on it). There's no reason for Mingo to start over Sheard or Kruger right now.

Let us know in the comments section what your overall assessment of the Browns' defense has been this season. Which positions have exceeded your expectations, and which ones have come up short? Do you see things getting better over the final seven games?