Jacksonville came into Cleveland having won 2-of-3, but still owning one of the worst records in the league. They looked like a team the Browns could take care of at home, but that unfortunately wasn't the case for the Browns Sunday.

For eight weeks of the season the Jacksonville Jaguars were the laughing stock of the NFL. Many people (myself included) were picking up Jacksonville's opponents defenses in fantasy football leagues each week because their offense was that inept. But, coming into Sunday's game in Cleveland, the Jags had won 2 out of 3. Where the Browns were going the other way, having lost 5 of 6 going into Sunday. Unfortunately for the Browns, both streaks continued, and the Browns dropped what appeared to be an easy game a few weeks ago. Cleveland has now lost 6 of their last 7, and Jacksonville has now won 3 of 4.

I'll take a look at what all transpired to get where we are now. Playoffs are out of the question, and now we're stuck in the NFL limbo of wanting to win, but hurting your draft stock. It'll be an interesting last few weeks, but first let's take a look at how the Browns got saddled with yet another L. 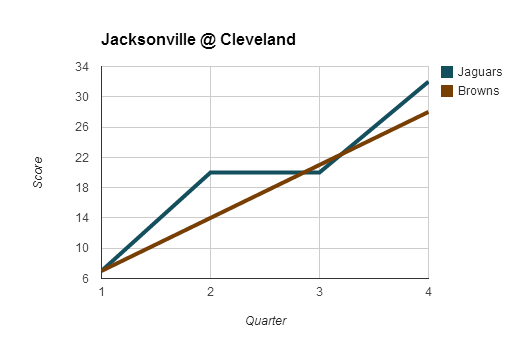 Jacksonville was forced to punt on the opening possession of the game and Cleveland would get great field position by way of a 38-yard punt return from Jordan Poyer that had them starting at Jacksonville's 47-yard line. Brandon Weeden got right to work finding his new best friend, Josh Gordon. Weeden hit Gordon on the first offensive play for a 42-yard catch that put them first-and-goal at the Jaguars 5-yard line. Two plays later Willis McGahee found the endzone for the second time this year to give the Browns the early 7-0 lead.

Jacksonville would respond with a very efficient 8 play, 80 yard scoring drive in just under 4 minutes. Chad Henne was able to find Clay Harbor who beat Tashaun Gipson for the 18-yard touchdown catch to tie the game at 7-7.

Cleveland would get the ball back with just over two minutes to play in the first quarter. Weeden and Co. would put together a very nice long drive that culminated in a Josh Gordon 21-yard touchdown grab. Weeden actually threw a really nice pass and Gordon was able to make the catch to put the Browns up 14-7 early in the second quarter.

Everything appeared to be going the Browns way until late in the second quarter. The Browns had just forced a three-and-out and the offense was coming back on the field with two timeouts and just under 3 minutes to play in the half. Brandon Weeden tried to find Jordan Cameron up the seam, but Cameron appeared to never look for the ball, and Jonathan Cyprien intercepted the pass. The pass was by no means a beauty, but had Cameron looked for the ball, he may have been able to make a play.

After the INT, Jacksonville was set up with great field position at Cleveland's 17. Maurice Jones-Drew would eventually fake a toss sweep and throw the ball to Marcedes Lewis for an 8-yard touchdown. Jacksonville would tie it up, 14-14.

The very next play for the Browns, Weeden tried to force a pass to the outside to Greg Little, instead the pass was intercepted again, this time by Dwayne Gratz. I thought the first interception wasn't Weeden's fault, but the second one clearly was a pass that shouldn't have been thrown.

The Browns defense again would have to come back out with Jacksonville having a short field. They'd do a good job of holding them to just a field goal. But the Jags would still tack on a Josh Scobee 44-yard field goal to take a 17-14 lead.

Cleveland would get the ball back with just under a minute in the half and one timeout. The Browns would get a couple decent plays and would get up near midfield when disaster struck again. Jason Babin got pressure on Weeden and stripped the ball, then SenDerrick Marks scooped the ball and almost scored, but was tackled at the Cleveland 18. There was enough time for Jaguars to add another field goal as the first half expired, they'd head to halftime with a 20-14 lead. Cleveland (read: Brandon Weeden) had 3 turnovers in the last 3 minutes of the first half.

Cleveland needed to come out in the second half and put some points on the board to regain some momentum. They'd do just that, but not without a scare. The Browns were driving on their first possession of the second half when Weeden tried to hit Gordon down the sideline. Winston Guy (UK alum, Go Cats), came over to break the pass up, but lead with his head and popped Gordon's helmet off in the process. The play clearly dazed Gordon, and he was taken to the locker room for further concussion testing. Weeden would eventually find Greg Little for a 4-yard touchdown pass, but clearly there was concern for Gordon. The Browns would take a 21-20 lead.

Late in the third quarter Billy Cundiff would miss a 53-yard field goal attempt, but the Browns defense would force a Jacksonville three-and-out on the ensuing possession. Josh Gordon would then make his return to a nice ovation from the crowd, and immediately would make a 10-yard catch. The Browns would eventually punt, but would get the ball back after Jacksonville had to punt on their next drive.

Disaster would again strike for the Browns, this time from a usually trustworthy source. The Browns got the ball with just under 8 minutes to play at their own 14. That's when Alex Mack snapped the ball over the head of Weeden and Weeden chased the ball down and kicked it out of the endzone for a safety. Weeden actually did the right thing for once and booted the ball out of the endzone so that the Jaguars wouldn't recover for a touchdown. That error would give Jacksonville a 22-21 lead.

Since it was a safety, the Jaguars got the ball back with just under 8 minutes  to play in the game with decent field position. They'd push into the Browns redzone, but would settle for another field goal to take a 25-21 lead.

On the ensuing kickoff Fozzy Whitaker actually got a decent return up to about the 30, but there was an illegal block in the back that put the ball back at their own 5-yard line. The penalty proved to do no harm, as the first play of the drive Brandon Weeden hit Josh Gordon, who shed a tackle and took it 95 yards to the house. The catch and run put him over 200 yards receiving for the second straight game, a feat never before accomplished in the NFL before Gordon. The catch and score also gave the Browns a 28-25 lead.

The Jaguars got the ball back with just under 4 minutes to go. They'd eventually get deep into Cleveland territory. On third-and-9 at the Cleveland 20-yard line, Chad Henne hit Cecil Shorts for the touchdown. Couple things I'd like to point out here. First, Joe Haden for my money is the best corner in the league, but he bit so hard on the double move by Shorts that he had no chance at recovering. I loathe Solomon Wilcots, but he was right on the broadcast, saying that the double route was the only route you could not afford to bite on.

Secondly, that wasn't a touchdown. Call it sour grapes, call it Browns bias, call it what you will. But, I was surprised they didn't overturn that call. I reviewed the tape again and I still believe that he doesn't have full control of the ball and two feet in simultaneously. I think he does ultimatley maintain control and clearly makes the catch, however I don't believe he did so in bounds. Mike Pereira clearly thought it was a catch, but I'm not buyin it.

Regarding your tweets about the go-ahead Jacksonville TD -- it was a clear TD. What do you guys see that I'm not seeing?

Jacksonville would take a 32-28 lead that would stand after the Browns hail mary attempt fell short. Cleveland dropped a heart-breaker. 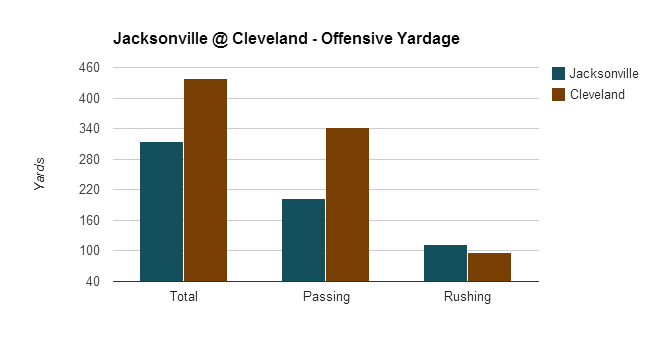 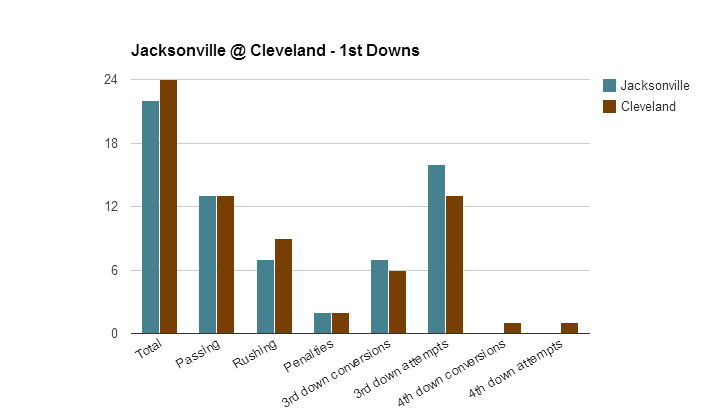 Sunday was a rough day to be a Cleveland fan. When the schedule came out, I have to believe that Jacksonville was circled as a W for most fans. And certainly after the Jags started 0-8, that circle was highlighted and stars drawn around it. But they don't say "any given Sunday" for nothing. Clearly the Jaguars weren't to be taken lightly having won 2 of 3 coming into Sunday. Not to say that the Browns didn't take them seriously, but there are more questions than answers after Sunday. That's never a good thing.

Up next the Browns head to Foxborough where the Patriots are 6-0. It looks like it will be a tall task to take down the Patriots at home, so it will be very interesting to see how this team responds to an embarrassing loss at home to Jacksonville. Hopefully they come out and shock the world.