Share All sharing options for: Project Detritus or Mooncamping´s Oracular Spectacular applied to the Draft 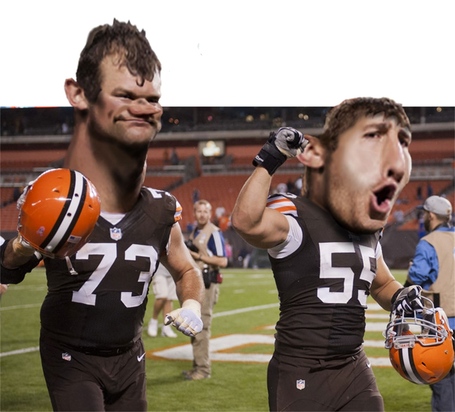 You might be aware, that Pokorny likes to pit our Offensive and Defensive units against our opponents prior to each game.

I got to thinking about the sadness, that envelopes the fans at the end of a season.  Especially in a losing year.

Players start fearing for their jobs.  Management has to grit their teeth, in reevaluating the quality of players, and start loosening the purse strings to acquire new prospects, that hopefully signal an improvement over what we now have.  And have become accustomed to.

There is only a slight recognizance and recollection, that the NFL is an elitarian institution to bring top level football competition to us.  And not even a small market team, as cozy as Cleveland, can escape the principles set forth, to keep competitive structures going, at every level.

The fans like to look to authoritative sources to brace for the impact of pending Offseason moves, that exemplify our ambitions and support our aspirations.  The price?  Realism.  Fair comparisons.  Promises.

So, since I got to thinking about the melancholy of a season ending and the imposition of further changes.  And following Pokorny´s lead.  I´ve devised a scheme, that could make it easier to contemplate the sensibility of firing and hiring new players to represent our club´s desire to compete for championships, or at least be a franchise with a reputation, as a collection of athletes, that is respected as a good opponent.

It goes as such.  And the extra benefit is, that it might serve to enlighten the Steelers too.  About their strength of roster:  I will pair Offensive and Defensive players, as they will face each other, according to Depth Charts.  And declare the victor.  And follow that up with a suggestion, of whether each competitor should retain their hold on that Starting Position.

It´s not fun.  But, I think we can dig the format as judges of superior football skills and talent.  Lets just hope, that life has prepared interesting alternate career paths, for the commendable "it´s better to have tried and failed, than not to have tried at all" constituents.  And that the culture in general is advanced enough to honor these attempts as worthy of compliment, in the interest of the proliferation of our favourite sport.

Non the less, Mooncamping´s Oracular Spectacular will extend to make a prediction of what Positions will be vacated or replaced.  Per team.

Lets start with the adversary in this case.

How about dem Browns?

So, look for the Omens.  Amen!

The Browns as per logic would draft:  DT, ILB, OLB, SS, LOT, LOG, C, ROT, TE, WR, WR, FB, RB, QB;  But, normally they create subterfuge, in the form of lying to their fans, they will keep guys, who´s athletic reputation has not yet been ruined.  Thus I predict, they will draft:  C, QB, FB, SS;