Heading into Foxborough no one gave the Browns even a punchers chance, but they had a chance to pull of the shocking upset, but the refs stole it away in the final seconds.

Well that sure was something, and something I wasn't expecting. My buddy asked me before the game if I knew what the line was. I responded saying 10.5, and that I'd put my life savings on the Patriots to cover. Good thing I didn't make a bet, cause the Browns almost pulled off an absolute shocker.

The Browns came just yards short on a Billy Cundiff 58-yard field goal attempt as time expired. The Patriots would go on to win 27-26, but let's take a look at how we got there, cause man, it was wild. 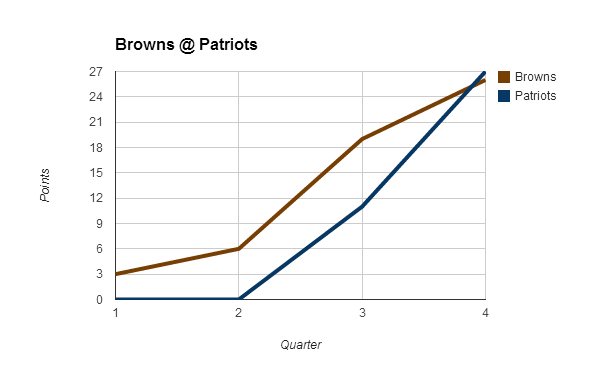 The Browns came out to start the game and actually established a nice rhythm running the football and Jason Campbell got into a groove early finding Jordan Cameron and Greg Little for 14-yard catches each on the opening drive. The Browns would ultimately settle for a field goal on their opening drive, and would take a 3-0 lead after Billy Cundiff's 43-yarder.

On the Patriots second possession of the game D'Qwell Jackson intercepted Tom Brady on third down. The Browns would be set up with decent field position at their own 35-yard line after the interception. The Browns would get into the redzone, but again would settle for a field goal. Cundiff would connect on a 37-yard field goal to give the Browns a 6-0 lead.

For most of the rest of the first half the Patriots and Browns exchanged field position and punts, and the Browns would head into the locker rooms with a 6-0 advantage.

The Browns forced the Patriots to punt on their opening possession of the second half and with just over 11 minutes remaining in the third quarter facing a 3rd-and-8, Jason Campbell hit Davone Bess for 10 yards and the first down. Campbell then connected with Jordan Cameron for 21 more on the next play. Campbell would then find Gary Barnidge for what would go on to be a 40-yard touchdown. There was a flag on the play for Aqib Talib's illegal use of hands to the face on Josh Gordon, which actually appeared to make the defense slow up, and would allow Barnidge to go basically untouched into the endzone. The Browns would then go for two to make it a 2 TD game, but the Chris Ogbonnaya draw play was unsuccessful. The Browns would still be up 12-0.

On the Patriots next possession Tom Brady found Rob Gronkowski up the seam for a nice gain and T.J. Ward made the tackle. The tackle was low, right at the knee and Gronk clearly was in pain right away. It's now reported that he has a torn ACL and MCL and will be out for the rest of the year. Ward said that he has been fined 3 times and has "to play within the rules, point blank." Ward wasn't flagged on the play, and that's the right call. It's a tough situation for the players to be in, the league is fining and suspending players for blows to the head, so unfortunately it appears injuries like this may become more prevalent.

Moving forward from that play, on the very next play Paul Kruger sacked Tom Brady and also caused a fumble that was recovered by John Hughes. Unfortuantely for the Browns they couldn't make anything happen on the ensuing drive, but it was nice to see Paul Kruger finally get in on the action.

The Patriots next drive would stall out at the Browns 15-yard line. On third down, Barkevious Mingo appeared to pressure Tom Brady which forced a bad pass to Shane Vereen, making the Pats settle for a field goal. The Patriots would get on the board with a Stephen Gostkowski 33-yard field goal to make the score 12-3 in favor of the Browns.

The very next play offensively for the Browns was a quick slant from Campbell to Gordon who stiff-armed Aqib Talib and was then off to the races. The play would go as an 80-yard touchdown pass and catch, and the Browns would take a 19-3 lead. Enough cannot be said about Josh Gordon. Talib is considered one of the better corners in the league, and Gordon flat out shredded him on Sunday.

The Patriots would get the ball back with a 1:19 left in the third quarter. Brady would hit Shane Vereen on the first play of the drive for 50 yards, he'd then connect with Vereen for a 16-yard catch, and Vereen would then cap off the drive with a 6-yard touchdown run. The drive for the Patriots would last exactly 1 minute. The two pass plays on the drive exposed one of the biggest weaknesses in the Browns defense, and that's linebackers in coverage, specifically Craig Robertson. Robertson got absolutely worked that drive, single handedly by Shane Vereen. The Patriots would go for two and get it to cut the Browns lead to 19-11.

After another Paul Kruger sack on third down midway through the third quarter, the Patriots would be forced to kick another field goal. Gostkowski would hit again, this time from 50-yards. The field goal would pull the Pats within 5, but the Browns were still clinging to a 19-14 lead.

The next possession for the Browns was a wild one. Campbell got off to a good start hitting Cameron for 13 yards. The Browns then ran an end-around for Josh Gordon for 34 yards. There was then a suspect intentional grounding call on Campbell. A catch by Josh Gordon for 19 yards, which New England challenged, but ultimately the play was upheld. Ultimately Campbell would find Jordan Cameron in the endzone for a 4-yard touchdown to cap off an 8 play, 80 yard drive, in just over 3 minutes. Campbell was impressive on the drive, going 4-for-5 for 52 yards and the TD pass. The drive would put the Browns ahead 26-14.

Naturally with over 2 minutes to play and down just two scores, the Patriots were never out of the game. Tom Brady quickly went to work, starting right where he left off, finding Shane Vereen on the first play of the drive. Brady only hit Vereen and Julian Edelman on the drive, each caught 4 balls, and Edelman found the endzone from 2 yards out. Jordan Poyer was also penalized for targeting a defenseless receiver, which in my opinion was a terrible call. The penalty would be enforced on the ensuing kickoff, which as we came to find out, would be costly.

The Patriots would have a short field to work with, starting at the Cleveland 40-yard line with exactly a minute to play. Brady would find Danny Amendola for 10 yards on first down. Then on second down was one of the worst calls I've ever seen.

Do I think that was DPI in New England? No.

By rule since the foul occurred in the endzone, the Patriots got the ball at the Browns 1-yard line. Brady would then hit Danny Amendola for the 1-yard touchdown catch. The Browns would stuff the Pats two-point conversion attempt and would be down 27-26.

Cleveland got the ball back with 31 seconds left and no timeouts. After a few nice passes, Campbell was able to hit Jordan Cameron for 13 yards down to the New England 40-yard line. The Browns spiked the ball with 1 second on the clock. Billy Cundiff would come on to try a career-long 58-yard field goal. In fitting Cleveland fashion, the kick was just short, and the Browns would lose by 1. Oof. 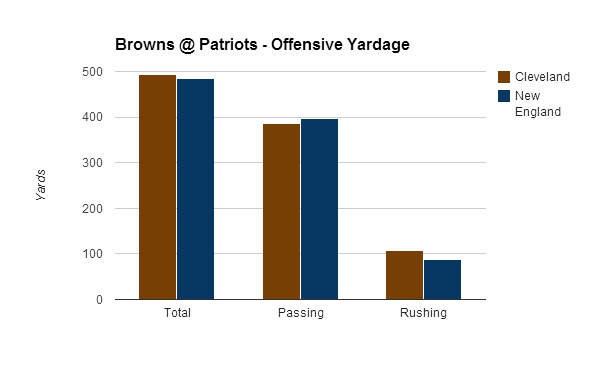 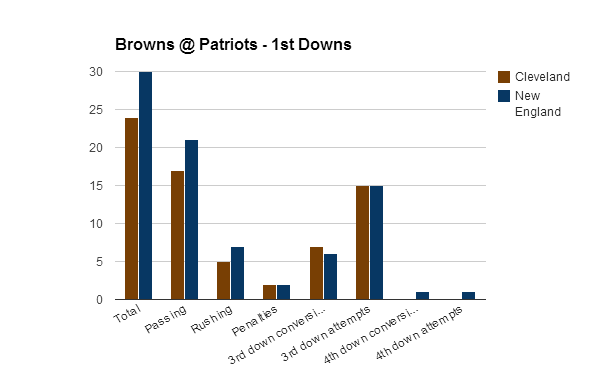 I personally didn't think the Browns stood a chance going into Foxborough. I was pleasantly surprised to see them fight the way they did. It ended up being another crushing loss, but the Browns have to be pleased with how they played on the road, against one of the best teams in the league.

It's tough to pin a loss on the refs, but the pass interference call at the end of the game flat out decided the game. There's no telling what could've happened had the Browns been able to play it out. Instead, Tom Brady was given the ball at the 1-yard line and the game was pretty much decided.

I loved seeing the team never quit thought and working the ball far enough down field to give Cundiff a chance. I'd make the argument that kicking a football 58 yards in 30 degree weather is incredibly difficult, and it is, like kicking a brick. But, when you see Matt Prater belt a 64-yarder in 15 degree weather, it makes it that much harder to swallow. (I know, it's all about the altitude.)

Either way, the Browns battled when no one (myself included) gave them a chance. It was a gutsy effort that unfortunately fell just short. The Browns will now look to snap a 4-game losing streak at home this weekend against the Bears.