Super Bowl 2013: Ravens Will Win Behind a Storybook Career for Ray Lewis

Share All sharing options for: Super Bowl 2013: Ravens Will Win Behind a Storybook Career for Ray Lewis

The Baltimore Ravens will take on the San Francisco 49ers this Sunday in Super Bowl XLVII. Although the 49ers are riding high with Colin Kaepernick under center, there is one big reason why it will be the Ravens who emerge victorious.

Why the Ravens Will Win Super Bowl XLVII

All season long, I have trashed the Ravens as non-contenders. I said they were one of the worst teams to make the playoffs. I said they had no shot at getting past the Broncos. I thought they would fall to the Patriots in the AFC Championship for the second year in a row. Instead, they are the last remaining team in the AFC -- what has gotten them this long? As crazy as it sounds, it is a season and a career full of heartbreak and legacy that has provided the "inspiration" to lead this team to the promised land. Call it whatever you want, but it is almost like it is the Ravens "destiny" to win the Super Bowl. 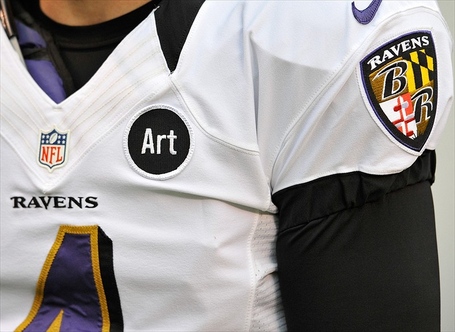 The Ravens have honored the passing of their former owner, Art Modell, with a patch on their uniforms all season. They will do so again at the Super Bowl. Credit: David Richard-USA TODAY Sports

You can map out the Ravens' season full of tragedy, heartbreak, and hope unlike any other. In September, former Ravens owner Art Modell passed away. The news struck a chord with Cleveland Browns fans who still felt hatred toward him, but Baltimore has commemorated his death all season long by wearing an "Art" patch on their jerseys.

Modell is up for the Hall-of-Fame again this year, the results of which will be announced soon. NFL Commissioner Roger Goodell spoke about remembering Modell as part of this Super Bowl weekend:

"There are two important people who are not here, but very much on our minds,’’ Goodell said. "Art Modell, the legendary former owner of the Ravens, who passed away in September. Art’s spirit is certainly here this week, and his name will be on the Ravens jersey on Sunday, as it has all season. And this is the first Super Bowl without Steve Sabol, the creative genius behind NFL Films. His imprint is all over our game and the Super Bowl. Steve and Art were innovators. They inspire us to exceed our expectations."

Later that month, Tevin Jones, the younger brother of wide receiver Torrey Smith, died in a motorcycle accident. Smith decided to play against the New England Patriots less than 24 hours later, and he was instrumental in the team's 31-30 win, as he recorded 6 catches for 127 yards and 2 touchdowns.

"Part of that is being consistent in what you do being a part of this team, being a part of this family," said Smith. "Regardless of my brother passing or (Ravens owner Art Modell dying Sept. 6) or whatever, we all stay focused. We have an opportunity to win it all. It's all about how you overcome." (Source)

"It’s going to be one hard last ride and we need to make it one to remember." -LB Terrell Suggs at the start of the playoffs after hearing about Ray Lewis' retirement.

And then, there is Ray Lewis. Drafted in 1996, it took five years for Lewis to win a Super Bowl in 2001 as a member of the Ravens. He never returned to the Super Bowl. In October 2012, Lewis tore his triceps, and he had it surgically repaired. It looked like his season -- and possibly his career -- was over.

Lewis was set to miraculously return in time for the playoffs though. That's when he unleashed the bombshell. Terrell Suggs summarized the thoughts of the stunned locker room upon hearing the news prior to the team facing the Indianapolis Colts in the first round of the playoffs:

"It was sad. I’m not going to lie to you. It affected me because for the past 10 years of my career, I’ve been sitting right next to the man and going to war on Sundays with the man," Suggs said. "It definitely affected me a little bit. When he went up there [in the team meeting], I thought we were getting our, ‘Let’s go on a run to the playoffs,’ speech. Not that. Come Sunday, it will be the last time, potentially, he and I will be at M&T together. It was very sad, but now the emphasis is on getting the job done. It’s going to be one hard last ride and we need to make it one to remember." 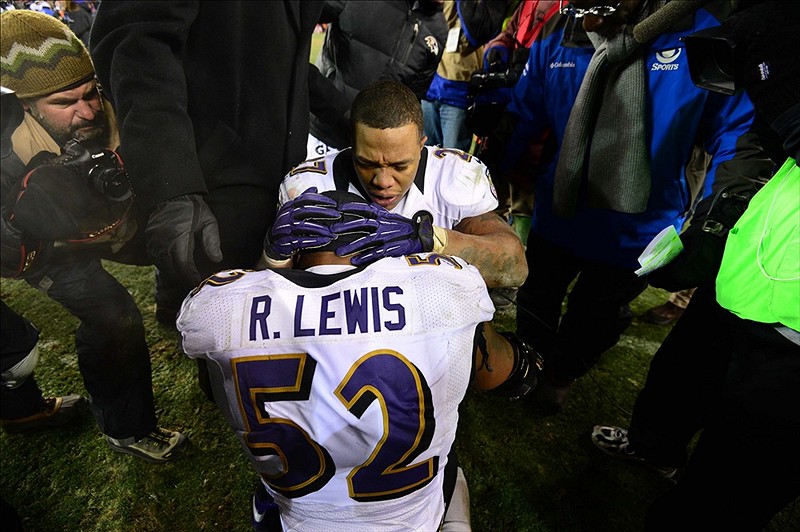 Ravens LB Ray Lewis in disbelief that he is headed to one more Super Bowl before he calls it a career. Credit: Mark J. Rebilas-USA TODAY Sports

One to remember? The Ravens owned the Colts in round one of the playoffs, 24-9. In round two, they defeated the team that many picked to go to the Super Bowl behind the incredible "Flacco Fling," the Denver Broncos, in double overtime. Two weeks ago, they got their revenge on the Patriots, in Foxboro. Tom Brady was 67-0 in his career when holding a halftime lead at home, but this Ravens team put that streak to an end.

No matter how talented of a team the 49ers are, they will become a victim of circumstance -- the Ravens are flying high right now, and nobody can stop them. Whether it's a big day from Ray Rice, a clutch defensive play from an unsung hero, or someone on special teams pulling a rabbit out of a hat, the Ravens have all of the chips falling in their favor.

On Saturday, I will have my full prediction for the Super Bowl, including who I think will really come out on top.