Should the Cleveland Browns Go All-In on Joe Flacco?

Share All sharing options for: Should the Cleveland Browns Go All-In on Joe Flacco?

What if the Cleveland Browns had the opportunity to "steal" one of the best quarterbacks in the league? With the Baltimore Ravens facing cap issues and quarterback Joe Flacco set to be an unrestricted free agent, Baltimore is expected to slap him with the franchise tag, which would value him at $14.5 million this year.

"Think of the shot of adrenalin for the Browns, if they could rip away Flacco from a team they despise. What sweet irony for Cleveland, to steal the Super Bowl-winning quarterback from the team that stole their franchise. With new owner Jimmy Haslam and uber-aggressive president Joe Banner dying to make a splash to show their fans this won't be the same old Browns, imagine Cleveland signing Flacco for five years and $110 million, making him the highest-paid player in history." -Peter King, Sports Illustrated

The possibility of Cleveland signing Flacco is a trending topic in the NFL right now. To the right, you can see how Peter King envisions the sweet story sounding for Browns fans -- an act of revenge for what happened after 1995. The story about what will happen to Flacco, including the possibility of him ending up in Cleveland, was actually the cover of his weekly Monday Morning Quarterback today.

Assuming the Ravens put the regular franchise tag on Flacco, any team would be free to negotiate with him. Baltimore would have the opportunity to match any qualifying offers before they lose Flacco. King's hypothetical seems outrageous -- what if the Browns offer Flacco a long-term deal with a whopping $35 million in 2013 alone? The Ravens might match something around $20 million, but a larger amount would be too extreme given their cap situation. The Browns, on the other hand, have about $48 million to spend in 2013.

Over at Waiting for Next Year, they describe an interesting situation if the Ravens and Browns each tried to offer the same type of contract to Flacco. The value of the contract would be the same, but the Ravens would back-load their deal, while the Browns would front-load their deal. In other words, Flacco would get more money up front with the Browns in the first couple of years of his deal; in the event that he got cut several years down the road, that's more money that he pocketed.

Boy, wouldn't that be something -- to get a Super Bowl quarterback from the Baltimore Ravens? Unfortunately, I've already seen that script, and it involved some guy named Trent Dilfer. 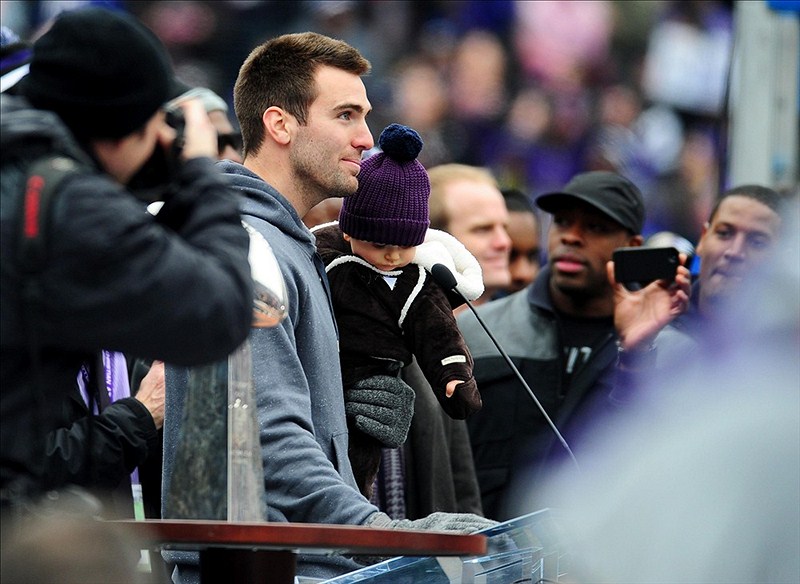 Joe Flacco might be on top of the world right now, but there's no way the Cleveland Browns should consider signing him away from Baltimore, if the situation presents itself. Mandatory Credit: Evan Habeeb-USA TODAY Sports

In an apples-to-apples comparison, of course Flacco has already had a way better career than Dilfer could have ever dreamed of. But, it's not like Flacco has the chance to be "the greatest free agent quarterback to ever hit the market." Sorry, that already happened this past season with Peyton Manning. Flacco might have the same amount of Super Bowl rings as Manning, but he will never even come close to holding a candle to Manning's level of talent.

For a couple of years, I said that Flacco was holding the Ravens back from doing further damage or making a Super Bowl run. Flacco has always had a tremendous core around him on offense and defense, not to mention a stable coaching staff and front office. This year, to his credit, he did an amazing job in the postseason and deserved to win the Super Bowl.

That doesn't change the fact that I would not, as an outside team, consider paying him a ludicrous contract, not to mention it would require coughing up two first-round picks. Not only would that help relieve Baltimore of some of their cap problems, they could sign a veteran like Alex Smith or draft a young guy to fit their system, and replace the likes of Ray Lewis and Ed Reed over the next two years with the extra first-round picks they received from the Browns. Sweet irony for Cleveland stealing Flacco from the Ravens? In reality, the converse would be true: Baltimore would rebuild their team while Cleveland wasted an opportunity to invest in multiple core players. What a badass way to kick off the Joe Banner era, eh? I think Tom Withers of the Associated Press said it well:

Sure, Joe Flacco would help the #Browns. If he brings Boldin, Smith, Jones and Rice with him.

It will probably be a moot point anyway. Baltimore has until March 4th to reach a deal with Flacco. If they can't get something done, I think they are too committed to their quarterback to risk letting him go. In a worst-case scenario, I think they would slap him with the exclusive-rights franchise tag, giving him $20 million in 2013 and thereby guaranteeing that no other team can negotiate with him. Just like the Eagles restructured Michael Vick's contract earlier today, I'd love to see the Ravens keep Flacco and cut loose a few of their other players. Let's put this "rumor" of Flacco-to-Cleveland to bed and move forward with the likes of Weeden and company.