Which Players on the Cleveland Browns Could Become Cap Casualties?

Share All sharing options for: Which Players on the Cleveland Browns Could Become Cap Casualties?

With the Cleveland Browns reportedly having $45 million+ in available cap space this offseason, one might ask, "why does the team even need to bother restructuring or cutting loose existing contracts?"

There are a variety of reasons. Because you have such a large amount of available cap space this season, you may want to open up more cap space in future seasons. For example, by cutting defensive end Frostee Rucker last week, the Browns are actually paying him $4 million in 2013. Originally, some of that money would have been guaranteed in future years. By cutting him now, you open up that money for the future.

Another reason is because you want to be big spenders, but efficient at the same time. If you are over-paying a non-productive linebacker, then the asking price for a free agent linebacker you're trying to acquire might go up. Also, with some of the extra money saved, you could turn around and re-invest it in one of your core players. For example, center Alex Mack is entering the final year of his contract. It would be great if Joe Banner and company could find a way to lock him up long-term before the start of the season.

With all of that in mind, let's take a look at five players who could become the next cap casualties for the Browns:

1. Chris Gocong, LB (6th Highest Cap Figure) - Gocong saw his season come to an end in training camp last season after he injured his Achilles. In January, head coach Rob Chudzinski said that Gocong has started to run and is expected to be ready for the start of the season. That is great news, and due to his experience in both the 4-3 and the 3-4, I think Gocong is a good fit for Ray Horton's defense.

Banner apparently has not been pleased with some of the contracts that former Browns general manager Tom Heckert gave to players. Rucker has already been cut, and Dimitri Patterson was cut before the end of last season. Cleveland will pay both of those guys a combined $5.1 million in 2013, but again, it saves money for the future.

The extension that Heckert gave Gocong has him scheduled to earn a base salary of $4.45 million in 2013. If the Browns decide to cut him soon, he would only get $625,000 from the Browns in 2013. Cleveland can afford to keep Gocong, as well as all of their other players at full price, but this looks like a contract they would very much like to restructure.

2. Colt McCoy, QB (8th Highest Cap Figure) - How many seasons does McCoy need to stick around as a backup? The Browns are reportedly interested in bringing in a free agent quarterback to compete with Brandon Weeden. It wasn't so bad for the Browns to keep McCoy last year, because his base salary was only $540,000. Entering the final year of his deal, clauses in his contract have increased his 2013 base salary to a whopping $2.325 million. 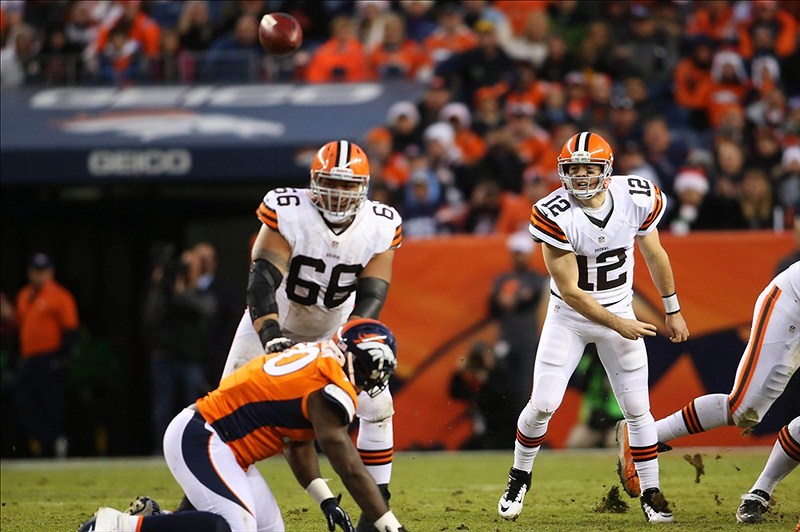 Look at the beautiful trajectory of that football. Chris Humphreys-USA TODAY Sports

The good news? It would only cost $187,750 to cut him. That's not nearly as bad as the Seahawks' situation with Matt Flynn, where cutting him would cost Seattle $6 million this year. With McCoy's future with the team unlikely, it's time to let him go.

3. Usama Young, S (9th Highest Cap Figure) - Entering the final year of his contract, Usama Young's base salary has increased from $1.55 million to $2.15 million. Right now, it's tough to gauge how new defensive coordinator Ray Horton views the safety position, except for T.J. Ward, who he already praised in his opening press conference.

Last season, Young, Tashaun Gipson, and Eric Hagg all rotated in starting roles. Of the three players, Young has the most NFL experience, but Gipson seemed to show the most potential. In his two years with Cleveland, Young has been average at best. If Cleveland can acquire a high-profile safety through free agency or the draft, the team can afford to let Young go. Cutting him would only cost the Browns $150,000 in 2013.

4. Shawn Lauvao, OG (12th Highest Cap Figure) - Being in the final year of your contract sure increases your chances of being released, doesn't it? Lauvao made the minimum in base salary last season at $540,000, but his base salary is jumping to $1.323 million in 2013.

Compared to some of the other players above, Lauvao has a lot going for him. He has started all 32 games at right guard over the past two years, and durability in the NFL is key. He is also part of one of the best, young promising offensive lines in football. Unfortunately, out of the team's five starters, he is also the weakest link. 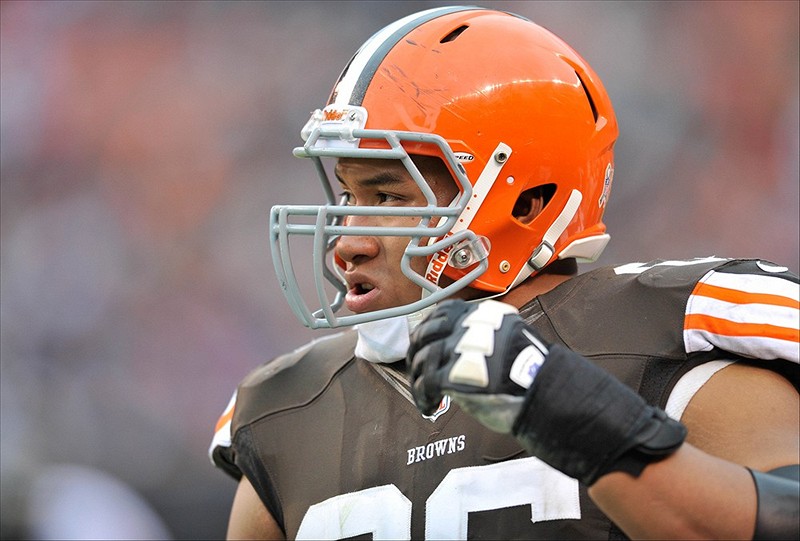 Despite what he is set to make, RG Shawn Lauvao seems likely to at least remain with the club, compared to some of the other players on this list. David Richard-USA TODAY Sports

There is a chance that Cleveland could sign a higher quality offensive guard in free agency, which would make Lauvao expendable. That might be risky, though, in the event Jason Pinkston doesn't return at left guard in top form. Cutting Lauvao would cost the Browns $174,250 in 2013.

5. Owen Marecic, FB (22nd Highest Cap Figure) - A cap-cutting column isn't quite complete until you list your fullback who is making peanuts to begin with. Marecic has two years left on his contract and has a base salary of $555,000 this year, which is the league minimum for him. Michael Lombardi doesn't sound very high on the fullback position in general, and before joining the Browns, he was quoted as saying, "When Cleveland puts Macicic on the field, its like they’re playing with ten."

With Brad Smelley already on the roster and making less money, the team really only needs one guy at the position anyway. I wouldn't think the team would abandon the fullback position entirely; after all, it's important what the coaching staff wants. Rob Chudzinski had FB Mike Tolbert in Carolina last year, and Norv Turner had FB Le'Ron McClain in San Diego. Those are probably two of the highest-paid fullbacks in the league. It would cost $204,000 to dump Marecic this year. This wouldn't be a cap-related move so much as it would be a logical move of the fact that Marecic hasn't lived up to the billing of a fourth-round draft pick in the least.

Using all of these approximations, if all five of these players were on the Browns in 2013, they would make a combined $11.9 million. Let's assume that the Browns decided to flat out cut Gocong, McCoy, Young, Lauvao, and Marecic. Cleveland would only owe a combined $1.34 million to those players, creating about $10.58 million extra cap space this year (and in the case of Gocong and Marecic, some extra space next year as well). If there were some high-profile players Cleveland wanted to bring in this year, they'd have the ammunition to do it.

Note: The salary-related data used in this article is from Spotrac.