First Round Draft Picks: What Should We Expect?

Share All sharing options for: First Round Draft Picks: What Should We Expect?

There has been a lot of back and forth over the quality of both Tom Heckert's and Michael Lombardi's drafts in recent weeks, and it got me thinking: what should we reasonably expect out of any draft pick? My first thought was to go pick by pick, or maybe use groups of five to compare to each other, but it quickly became apparent that as the game changed, so too did drafting strategies. It simply isn't a good idea to compare drafts in the 80s to 2012, and that's exactly what you would have to do to have any kind of meaningful sample size. Instead, I decided to go round by round. In this post I'm going to explore what we should expect out of a first round draft pick, and perhaps more importantly, what we need to get to be better than the other 31 teams in the league. Before I begin, I want to be clear that my conclusions are broad on purpose. I am not digging to far into these numbers just yet, and there's a lot of nuance here. I'll do my best to note the pitfalls involved with this type of analysis, but just be assured there are a lot of them. So with that out of the way, let's get started.

What Makes A Good Draft Pick?

Choosing the parameters I wanted to look at for this study was a fun exercise in and of itself. In the end, I settled on a few very simple numbers and one that's a lot more complex. First, I looked at how many years a player was able to stay in the NFL. At the bare minimum, a player needs to be useful enough to stick around for a while. Next, I looked at how many years they spent as the starter at their position. Guys who were good enough to start and good enough to start for most of their career are better than backups, obviously. I then took a look at Pro Bowl appearances. I can already hear some people screaming about how meaningless the Pro Bowl is, but hear me out. My first instinct was to look at All-Pro appearances, but it turns out that very few players ever make an All-Pro team, they are essentially outliers. In contrast, a lot more players make the Pro Bowl at least once in their careers, so there's a lot more data to work with there.

Finally, I looked at each player's weighted approximate value (AV). This is a metric invented by pro-football-reference.com and you can read more about it here. Basically, it's a bit like WAR from baseball. However, as far as I know there is no "replacement level," so to speak. Basically, if you see even one snap you are going to have a positive value here. It's also a metric that values longevity. The longer you stay in the league, the more AV you pile up. Even PFR would be quick to tell you that they used the word "approximate" for a reason. The differences between a 50 and a 53 are essentially nil for any two players. I'm just using it here as an easy way to slap a single number on player performance, so all the standard qualifiers about doing such a thing apply.

This part was tough. I wanted to pick a group that was recent enough that we could compare the results to today, but the more recent a draft the more suppressed numbers like years in the league are going to be. For example, a player drafted in 2003 who played for five years is not the same as a player who was drafted in 2008 and is still playing, but this study would rank them the same. So I had to make a compromise here. I chose to use every draft from 1999 to 2004. There are a fair number of players here who are still playing, so the average years played, pro bowl appearances, etc. can be thought of as lower bounds on the true average. However, there are not so many that I think they alter the results significantly. Trimming the drafts this way leaves me with 190 first round picks to look at. Let's see how they did.

Years In The NFL

The average first round pick spends about 8.4 seasons in the NFL. That's quite a bit longer than the average NFL career length of all players, which is closer to three or four years. To get a more complete picture, let's take a look at a histogram of the data. 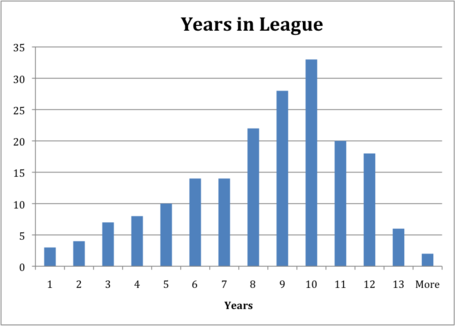 As we can see here, there is a definite peak around nine or ten years, rather than the statistical average of eight. Like I said, the averages are going to be a little lower than they should be, so to me it looks like a competent GM has to get at least nine years out of each first round pick, whether that's in a starting or reserve role. I don't think anyone here needs me to point this out, but the Browns have failed miserably at this. Half of the Browns picks failed to meet that criterion, and the ones that did saw most of their production come with other teams. I guess it's no mystery why the Browns have sucked for so long.

Years As A Starter

Next let's look at how many years each player started in the NFL. The league average was 5.8 years, quite a bit lower than the total years in the league. I think this may be due to teams being willing to keep first round picks around longer or give failed picks from other teams another chance, hoping they figure it out. In that scenario, the player sticks around the NFL but doesn't necessarily start. For instance, Ricky Williams spent 11 years in the NFL but only started in five of them. Again, this average means little without context, so here's another histogram. 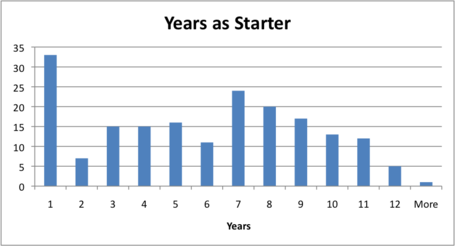 Wow, a whole lot of variance here. Obviously this isn't as cut and dry as total years. There's no clearly dominant peak that we can say represents an expected outcome, but there is a small jump at seven years. Because of this, I think it's reasonable to say a good GM should get at least seven years of starts out of their first round picks. Ideally, we'd be up around ten years or so, but it is hard to say even the best GMs should do that consistently.

Ah, the Pro Bowl, everyone's least favorite popularity contest. Interestingly, few first round picks ever make a Pro Bowl, and the average sits at 1.4 appearances. That average may be suppressed a bit due to some players not being done with their careers yet, but it is also buoyed by some players who are truly great. There is a smattering of guys with one or two appearances, a ton without a single visit to Hawaii, and then a select few, such as Champ Bailey, who should probably buy a vacation home there. I would include another histogram here, but frankly it isn't all that interesting. There's a small peak around eight or nine, a small peak around three, and a gigantic peak at zero. Not much to gain there. What this tells me is that surprisingly, we shouldn't really expect first round picks to make the Pro Bowl. However, if the Browns want to be good, they need to get that kind of return from their picks. It is my belief that this small difference between picking starters and picking Pro Bowlers is what separates mediocre teams from great ones.

On to the catch-call metric. First, for context, Tim Couch has an AV of 30 and Donovan McNabb has an AV of 107. That should help you interpret what exactly you're looking at. The average AV was 44.3, or David Carr. That seems low. Most first round picks turn out better than David Carr or Deltha O'Neal, or at least they should. So to figure out why that's so low, let's go to the histogram. 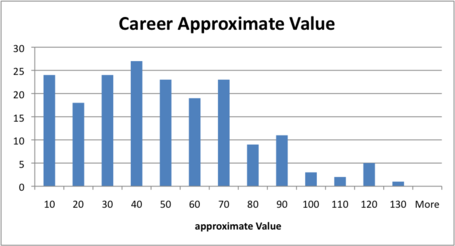 It seems most players are evenly spread between 0 and 70, with a select few topping 100. So yes, in addition to the players who are still adding value, there are a lot of first round busts. In this case, I think we should expect better than average from a first round pick, or at least we better if we want to be anything but terrible. We need players in the 60-70 range at least. Someone who can pile up 120 AV over a career would be great, but I think it's futile to expect that from even the best GMs.

So what have we learned here? We've learned that the expected return on a first round pick is a player who can play for about a decade, start for most of that time, and maybe make a pro bowl or two. That's the bare minimum to be successful. The really good teams are going to have players who are just a step above this typical return, maybe someone who makes a bunch of pro bowls or compiles a crazy (if short) run of stellar performance. Again, it's not secret that the Browns have sucked at this. Gerard Warren and Kellen Winslow Jr. are the only two Browns picks from this group to meet the criteria listed above, and both of them just barely make it. Even those two are unacceptable when you consider the position at which they were selected. In short, the Browns' lack of success in the last decade can be easily traced to how awfully they drafted at the top of the first round.

Obviously, there's a lot that went unaccounted for here. For example, different positions can play longer than others, players can have career-ending injuries, or they can enter a situation where they are just a bad fit. Good draft picks can be ruined by bad teams and vice-versa. I also did not account for where in the first any players were selected and even at 190 players, my sample size is smaller than it probably should be. Even still, hopefully I've provided some sensible guidelines for the next time we're arguing about Tom Heckert and I look forward to seeing what I get for later rounds.