Do Coaching and Production Trump Talent?

The NFL plans to implement a new expanded player-assessment test designed to provide a comprehensive look at a player's "non-physical capabilities, aptitudes and strengths," according to an NFL memo obtained by NFL.com's Steve Wyche.

Share All sharing options for: Do Coaching and Production Trump Talent?

The Cleveland Browns have a completely new group of coaches in the building. There are many questions about how Rob Chudzinski, Norv Turner and Ray Horton are going to develop and train the team in their new scheme and approach: what exactly does "big guys that can run and little guys that can hit" look like? How much will the offense really attack? Will Brandon Weeden be the starting QB? Who will be the competitor? Where will we focus in the NFL Draft?

Enough questions already, how about some philosophy? NFL Philosophy.

There's a former NFL Operations Coordinator who I follow on Twitter who is constantly active sharing tons of great insight, takes, and information. He tweeted a lot today about how strongly he feels coaching and production trump talent.

Here is his take, and don't let his avatar fool you:

This is interesting because in contrast to the last two years (excluding Dick Jauron) I think we currently have a great group of teachers in the building who can adapt to coach our young talent. That's one of the main reason's why I am supporting keeping Weeden and addressing other areas in the draft and free agency. I believe the current coaching staff can actually make our players better.

According to NFL.COM reporter Albert Breer, in a MEMO obtained by Steve Wyche, it appears that in addition to the Wonderlic, the NFL will begin supplemental testing that will be 60 minutes in length and the players will not be able to prepare for it, there will be more released on NFL.COM shortly.

Some of the details are cited below: 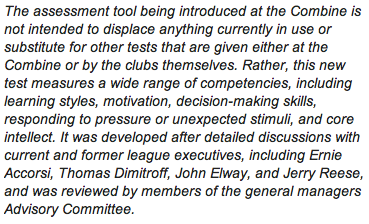 I hate to be the one wearing "rose colored glasses" around here but again, I remain excited to watch our new coaching staff teach our young players and hopefully prove the Coaching > Talent argument true. I'm also hoping that this new testing piece of the draft process will help the Browns find the mix they prefer among production, talent, motivation, decision making, etc. I think Chud and company have shown the ability to do adjust and coach their players effectively in the past and this gives me confidence that they can do it again with the Browns young core and our soon to be new rookie class of 2014.

Relax. I'm not preaching or thinking that's realistic. . . but you never know in the NFL and like I said earlier in the week, it can't get any worse.

What do you guys think about the coaching and production over talent argument? Who fits, who doesn't? Blast away!