Whether the Cleveland Browns try to re-sign Brandon Jackson or not could hinge on what they do with another running back from their roster last season: Chris Ogbonnaya. Unlike Jackson, Ogbonnaya is a restricted free agent. 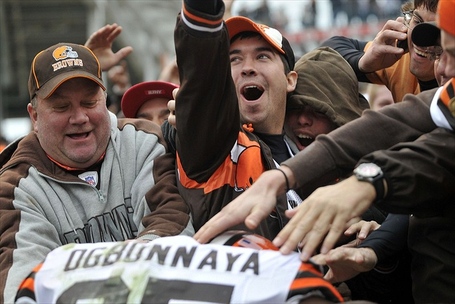 How and When He Joined the Browns: The Browns signed Ogbonnaya part-way through the 2011 season, just a couple of days after he had been waived by the Houston Texans. It was a necessary move for Cleveland, thanks to Jackson landing on injured reserve in the preseason, the recurring injuries of Montario Hardesty, and Peyton Hillis going soft.

Productivity Level Last Season: Ogbonnaya was definitely the favored third-down back over Jackson in 2012, but that was under a completely different offensive coaching staff.

Ogbonnaya did not carry the ball too often, but he ended the year with 24 catches for 187 yards. 20 of those catches came during the first 8 games of the season, though. After that, Hardesty's reps increased, and Ogbonnaya remained on the bench, just like Jackson.

Why Keeping Him Could Make Sense: I don't think we need to rip Ogbonnaya for Jackson not playing last year; that decision fell on head coach Pat Shurmur. Ogbonnaya has the advantage of playing over the past two seasons, compared to Jackson. He is a decent receiver who would help keep the continuity of the Browns' running back situation going.

What the Browns Should Do: When March 9th comes, the Browns have three days to offer a one-year tender worth $1.33 million to Ogbonnaya. Any team that signs him while he has that tender would owe the Browns a 7th-round draft pick in 2013, since that's when Ogbonnaya was selected by the St. Louis Rams in 2009.

If the Browns do not offer him a tender (or a new contract) during that period, he will become an unrestricted free agent. I don't think Cleveland will tender him; I see Ogbonnaya being let go and for the new coaching staff to pursue someone else in free agency or late in the draft.

Now it's your turn -- vote in the poll below on whether or not the team should try to bring Chris Ogbonnaya back in 2013!