After talking about the Cleveland Browns' free agent running backs, it's time to shift gears and consider the wide receiver position, where we will start with Mohamed Massaquoi. 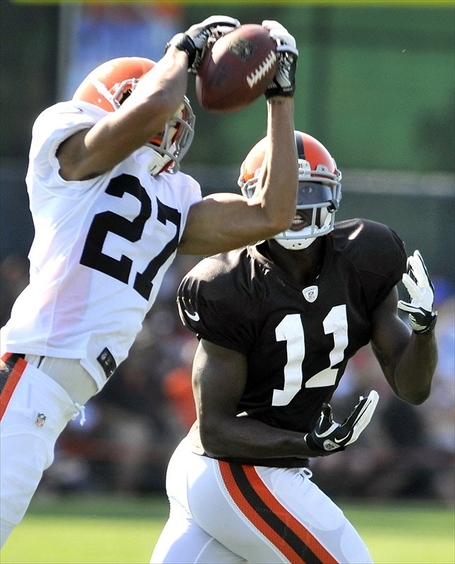 Here is one problem Massaquoi had: waiting for balls to come to him, rather than fighting off a defender to make a tight catch. Credit: David Richard-USA TODAY Sports

How and When He Joined the Browns: Massaquoi was taken in the second round of the 2009 NFL Draft. The Browns had drafted wide receiver Brian Robiskie earlier in the second round, but was released in 2011 after being ineffective. Massaquoi outlasted Robiskie, but did he do enough to warrant a second contract?

Productivity Level Last Season: Prior to entering the 2012 season, everyone felt like it could be a breakout year for Massaquoi. His career high in receiving yards came in his rookie season (624 yards), but his production went south in the following two years.

Massaquoi got off to a solid start last season, recording 8 catches for 131 yards in his first two games. Then, he suffered a hamstring injury that bothered him for half of the season. When he returned, he was officially behind Josh Gordon on the depth chart, which meant that his reps were reduced significantly. He later suffered a knee injury that landed him on injured reserve. He finished the year with 17 catches for 254 yards and more injuries (two) than touchdowns (zero); that's pretty much what you don't want to happen in a contract year.

Why Keeping Him Could Make Sense: Prior to last season, concussions were what plagued Massaquoi, so maybe you can chalk up 2012 as a fluke. He hasn't performed well enough to warrant a massive contract elsewhere, so Cleveland could probably bring him back on a relatively low contract to compete for a job in training camp. Although he historically struggled at adjusting to the deep ball, he runs smooth routes and is an acceptable third or fourth receiver to have.

What the Browns Should Do: Including bonuses, Massaquoi made a little over $1 million in 2012. The Browns would have to sign him to a minimum base salary of $715,000 in 2013. I think the Browns should focus their free agent and draft efforts on the defensive side of the ball, so retaining Massaquoi on something like a two-year deal seems fair. At the same time, it would not crush me to see him sign with another team, especially if it opens the door for someone like Jordan Norwood to get more playing time.

Now it's your turn -- vote in the poll below on whether or not the team should try to re-sign Mohamed Massaquoi!