It started a flash fire that leapt on to Jordan's body. It was basically a fireball that burned itself out, but not before doing enough damage that he had to be life-flighted to Maricopa Medical Center. By the time he made his way out of the garage, he had second and third degree burns on 40 percent of his body

Next up on my Browns' Potential Draft Target Breakdown series is Dion Jordan, DE from The University of Oregon. An intriguing prospect for any team in search of a multi-faceted and versatile OLB. I know there are lots of mocks and rankings out there but when I analyze a player, I focus on what I see on the tape and I how I feel that will project at the next level. Thanks again to the fellas over at draftbreakdown.com, I was able to watch and re-watch every one of Dion Jordan's games available there from the 2012 season.
The Good
Jordan has tremendous potential and owns a skill set more diverse than any LB in this class. At 6'7", 243 pounds, his athleticism, speed and ability to cover the TE or WR in the slot (and dominate them) will be hard for any NFL team to resist in the first round. And this is after they've considered that in only his 2nd season as a pass rushing DE he was able to bend the edge better than almost any other DE/OLB. Jordan has a motor that is relentless and he's always flying to the ball, even 20 yards downfield. His contribution on special teams this season is something NFL team may find valuable.
Jordan switched from TE to DE in 2010. In his first year starting (2011) he recorded 42 tackles and 7.5 sacks. In 2012 Jordan recorded 44 tackles, 10.5 tackels for a loss, 5 sacks and 3 forced fumbles. He was a finalist for the Butkus Award in 2012 which goes to the best linebacker in college football each season. His production wasn't eye popping, but it was consistent. The thing that resonated with me was that his performance seemed to get better as the games went on.
Jordan shows strong use of his hands and hand moves. These seem very natural for him. He uses spin moves but is still raw in terms of being a finished product here. He shows elite coverage skills for his position and is able to shift his hips and mirror the receiver. He can jam them at the line and break their route due to his size and speed, often dominating slot WR's and TE's in passing situations.
The Bad
Sometimes the numbers don't lie. And these numbers are somewhat concerning when you consider the Browns may have their eye on him at #6. According to John Pollard, the GM at STATS, the world's leading sports information and technology company, Dion Jordan ranks last among the top prospects in production in these areas:
@JPSTATS: Top Prospect DEs when measuring Sacks/Snap: 1) Ansah 2) Okafor 3) Werner 4) Moore 5) Jordan 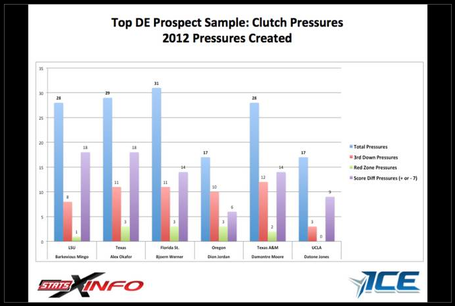 Like I said above, Dion Jordan's production was consistent, but not eye-popping. As you can see from the data above, Jordan was the least productive out of the prospects being discussed as potential fits for the Cleveland Browns' at #6.
Jordan is a raw / pass rushing extraordinaire who needs to develop and perfect the natural abilities he has shown at the college level. While he gains the edge, the reason his production was low appears to be his strength and size. He often gains the edge but then gets pushed off balance / off his line. He will need to add as much bulk as he can without sacrificing his other strengths in order to maximize his balance, bull rush, and explosion.
The other concerns I saw on film were that he often over ran the target on running plays and ended up slipping during pass rush plays or being pushed off balance. He often gets absorbed by the blocker and this negates his ability to stop the run or break the protection to get to the QB. He can usually fight through this and break free quickly, but will have to get better at this at the next level.
Lastly, how bad is his shoulder injury and how long will he be out rehabbing? Jordan has already said he'll do every drill except bench press at the combine, but how is shoulder surgery going to affect his strength and participation come training camp and the season?
Overall
There's no doubt the potential and the talent exist with Dion Jordan. I think he is the best OLB prospect in the class due to his versatility. He can simply do it all. His roots as a receiver extend themselves in coverage packages against WR or TE. HIs length and speed and explosion allow him to rush the passer and gain the edge better than any prospect this year.
Projection
Many of the flaws in Dion Jordan's game are coachable but teams will wonder about (and differ on) which position he is the best fit for and how they feel about his durability concerns and his ability to add weight. I find his production as a concern specifically vs other prospects like Ansah who have shown an upwards trend in production over the last year and already have the size and strength needed for a LB who can rush the passer and stop the run in the NFL.
A lot of teams could fall in love with Jordan, anywhere from our very own Cleveland Browns at 6 to a team lurking in the high teens or low twenties. He is a top talent but I think teams will stick to their board. Injury concerns will effect where he goes and when but I think we see him taken before 15.
---
Here's a link to ALL of Dion Jordan's 2011 and 2012 FILM available at draftbreakdown.com. Check it out and weigh in your opinion. What's your take... is Dion Jordan the best option for the Cleveland Browns at #6?
---
Film Breakdown:
The Edge Rush: "Bending the edge" 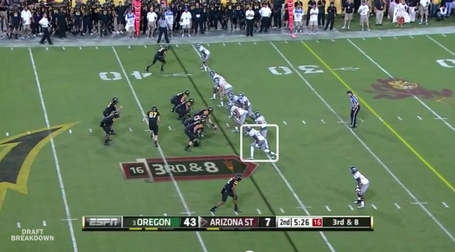 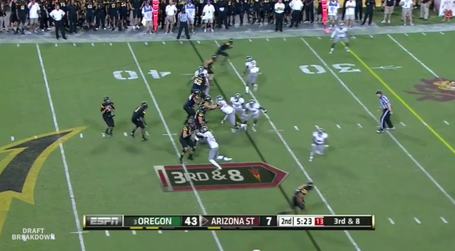 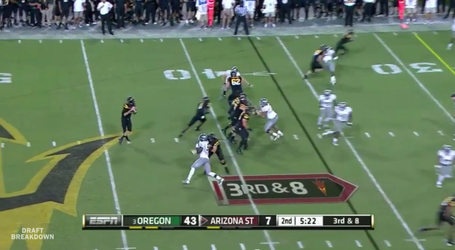 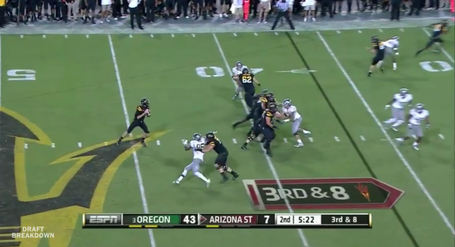 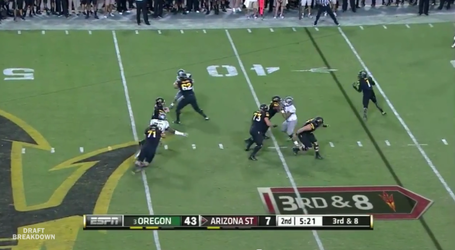 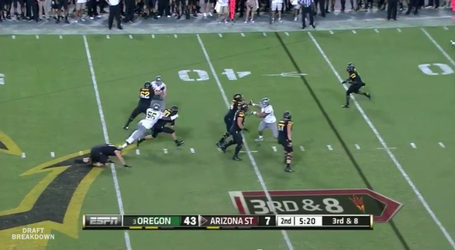 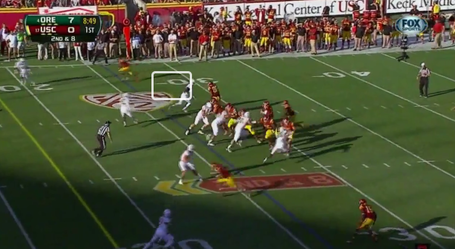 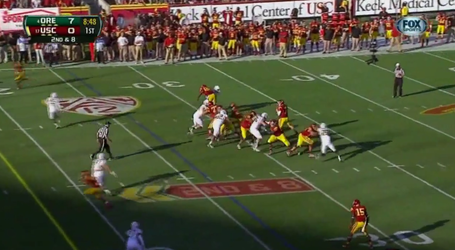 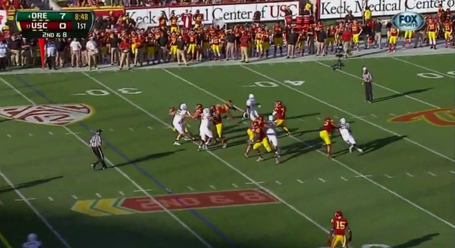 Coverage: Hips and mirroring the receiver 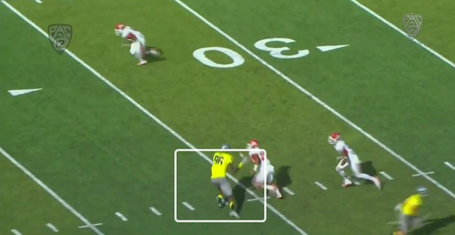 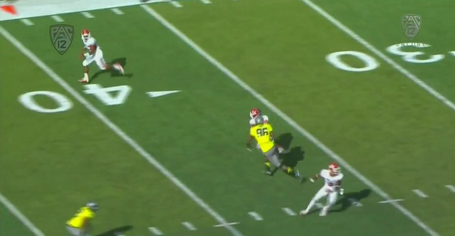 Dion Jordan, a 6'7", 243 lbs, DE, is lining up in coverage with what I believe is the TE. He meets him at the line of scrimmage and checks him with his hands, then is able to shift his hips and mirror his man as they run upfield. Jordan has extremely good coverage here and the QB does check down. 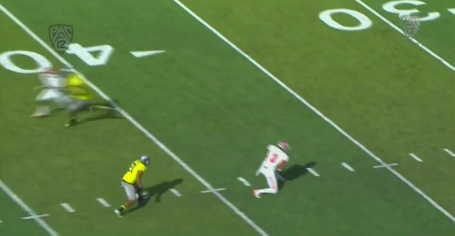 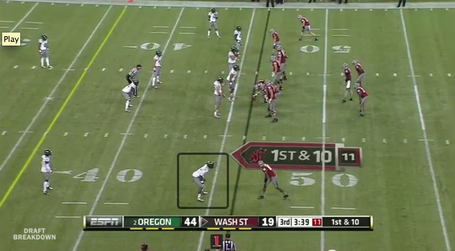 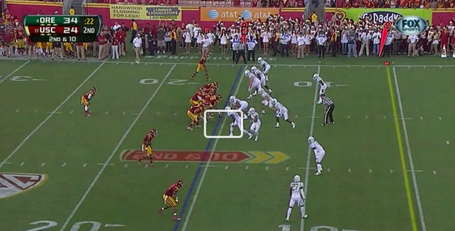 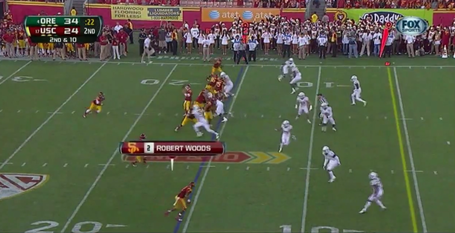 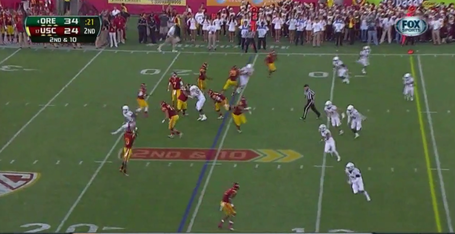 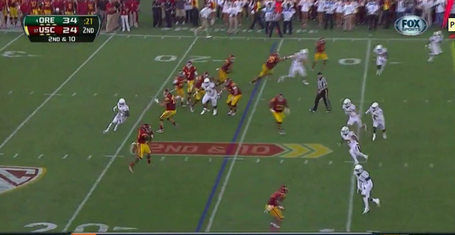 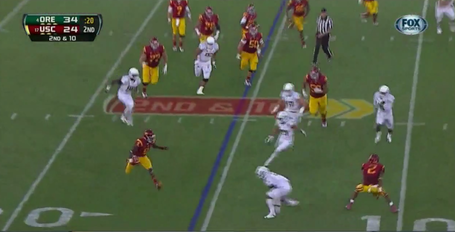 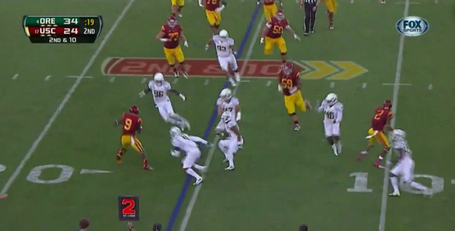 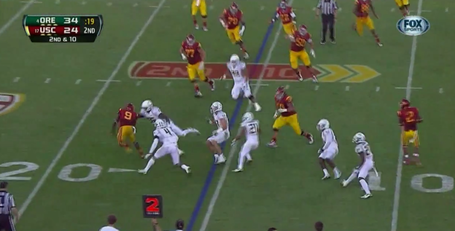 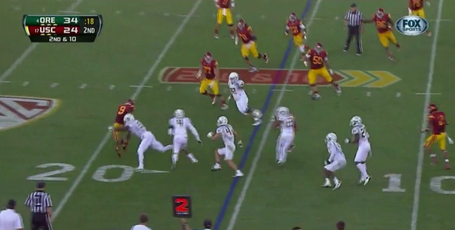 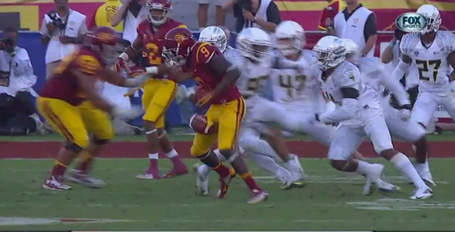 Lastly, another edge rush to get you on the edge of your theoretical seat. You see Jordan at the left of your screen squaring off against the LT # 62: 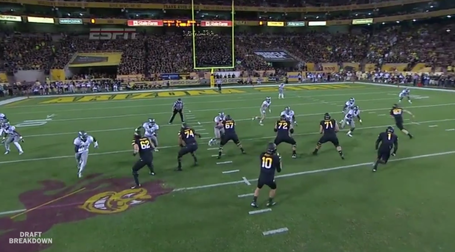 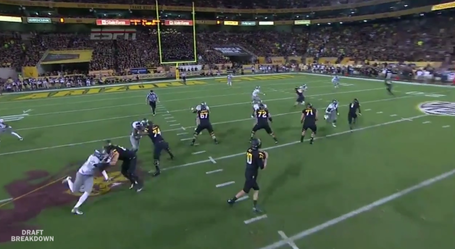 Notice the excellent use of his left arm to disengage the tackle and get him off balance: 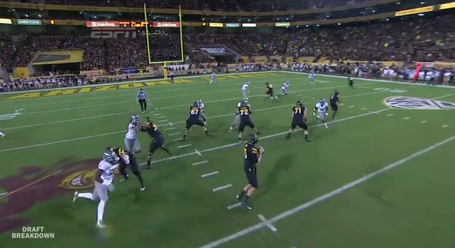 This is usually the place where tackles have been able to push him off balance; this is where he would over pursue the QB - the QB would simply step up in the pocket. We see him slip or slide sometimes because of this. But not here: 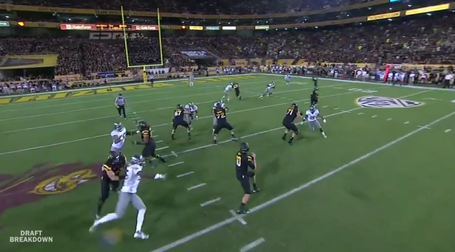 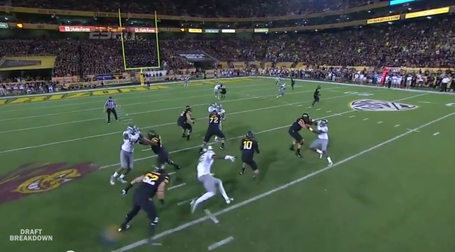 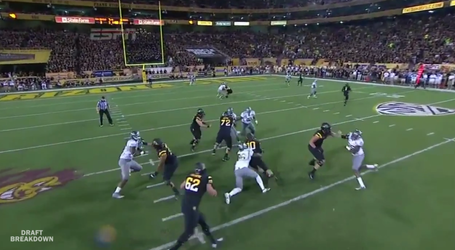