In today's piece about free agents on the Cleveland Browns, we look at Joshua Cribbs, who although he is listed as a wide receiver, is he better known as a special teams demon. 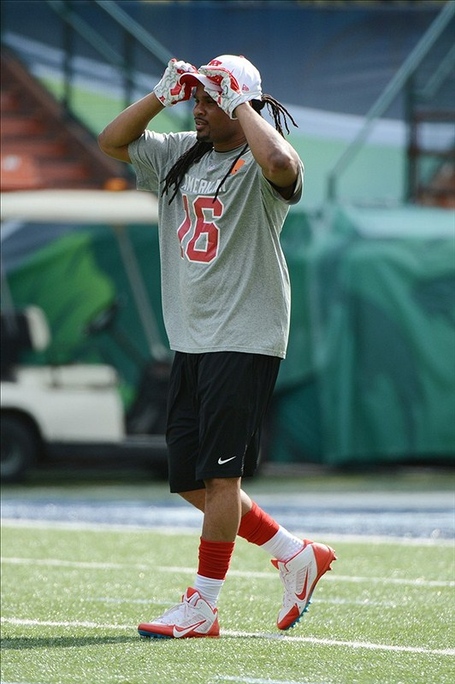 Cribbs made the Pro Bowl in 2012 (not initially) and actually played a little offense in the game, catching a touchdown. Credit: Kyle Terada-USA TODAY Sports

How and When He Joined the Browns: Cribbs joined the Browns way back in 2005 as an undrafted free agent. After an impressive rookie season as the team's return man, the Browns signed Cribbs to a six-year contract extension in 2006 that would keep him with the team through -- you guessed it -- last season.

Of course, we know the story wasn't all that simple. As still a relatively unknown player in 2006, Cribbs jumped at the extension, despite the fact that he would be paid peanuts compared to a player of his future level of talent. Cribbs made a stink about it when Mike Holmgren first came aboard, and eventually, he was awarded a restructured contract.

Despite being anxious as ever to be involved as a receiver and coming off his most productive receiving year in 2011, Pat Shurmur refused to utilize him on offense. Cribbs only had 7 catches for 63 yards on the season to go along with 6 carries for 42 yards.

As a coverage guy on special teams, Cribbs had 8 tackles, 1 assist, and 1 fumble recovery.

Why Keeping Him Could Make Sense: Cribbs is a great all-purpose special teams player and is still one of the best in the NFL at what he does. He is also one of those players who is great for the community and the overall connection to Browns fans -- he went to Kent State and has been with the team longer than any player besides Phil Dawson.

Cribbs' skills at receiver are, in my opinion, underrated. He can be a very stable guy who knows how to find the open holes and fight through defenders for the football. New head coach Rob Chudzinski is the guy who first started using Cribbs in the Wildcat from 2007-2008, and Chudzinski continued utilizing the Wildcat package with DeAngelo Williams when he went to Carolina. Could that familiarity be more incentive to retain him?

What the Browns Should Do: Cribbs made $2.688 million total in the final year of his contract. The difficult thing is this: how much do you pay a guy like Cribbs? He's only 29, so he should still have a couple of years left in the tank. Jacoby Jones signed a two-year deal at the start of the 2012 season for Baltimore, and his cap hit for 2013 is scheduled to be $4.9 million. Leon Washington from the Seahawks will make $2.875 million in 2013. Devin Hester from the Bears will make $2.94 million in 2013.

If the Browns want Cribbs back, he would probably look to make at least $2.5 million, which is what he averaged over the past three years. Back in 2010, he thought an offer of $1.4 million was "insultingly low." I would be happy to have Cribbs back for several more years. Although Travis Benjamin offers a lot of intrigue on punt returns, there is no reason why the Browns can't creatively utilize both guys on punts. Yes, at some point, the Browns need to move on and find a new special teams leader, but Chris Tabor, one of the few coaches retained, should not completely have his Pro Bowl unit scrapped in 2013.

Now it's your turn -- vote in the poll below on whether or not the team should try to re-sign Joshua Cribbs!