This Sunday, the NFL season will officially come to a close when the San Francisco 49ers take on the Baltimore Ravens in Super Bowl XLVII. Kickoff time is scheduled for around 6:30 PM ET. Here is my official prediction for the game:

Related Links: Why the 49ers Will Win | Why the Ravens Will Win 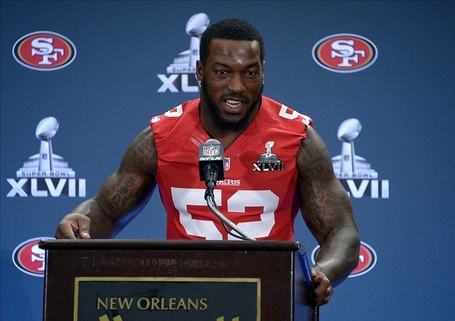 49ers LB Patrick Willis is regarded as one of the best players in the league. Credit: Kirby Lee-USA TODAY Sports

Ravens Defense: The Baltimore Ravens are built on the inspirational play of linebacker Ray Lewis. Even if he isn't making the same type of All-Pro plays he once was, his presence is infectious to everyone around him. Despite being banged up and losing cornerback Lardarius Webb during the regular season, Baltimore finished around the middle of the league defensively.

In the postseason, despite facing two of the best offenses in the NFL on the road, the Broncos and the Patriots, Baltimore's defense came up with the clutch turnovers they needed to come away victorious.

The 49ers' physical style of play was evident during the regular season, when they were 3rd in the league in yards allowed. Statistically, it might not seem as though that has carried over to the postseason. When you consider what they did against the Falcons in the NFC Championship, though, it shows how they can help carry San Francisco in the face of adversity: they shut Atlanta out for the entire second half, allowing their offense to rally for the lead with 14 unanswered points. 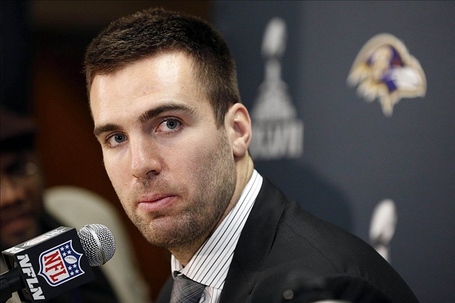 Ravens QB Joe Flacco has more than delivered for his team this postseason and will be looking for a big payday as a result. Credit: Derick E. Hingle-USA TODAY Sports

Ravens Offense: You wouldn't think that a late-season change for a playoff team at the offensive coordinator position would be the right move, but whatever Jim Caldwell has installed has done wonders for the Ravens' offense. The utilization of Ray Rice and Bernard Pierce has been much improved, but the real story has been the play of Joe Flacco.

Flacco hasn't thrown an interception in the playoffs and has thrown 8 touchdowns for a QB rating of 114.7. In the passing game, Flacco throws one of the best deep balls in the game. There always seems to be one drive in the game in which Anquan Boldin become "the" guy. I don't care what cornerback is on him when he's on a roll -- Boldin can shield off defenders and catch the ball in a tight window among the best of them.

49ers Offense: The read-option with Colin Kaepernick should be the talk of the NFL right now. How do you defend a guy who has one of the strongest arms in the NFL, has mastered reading the read-option, and can run very well for a quarterback?

To make things even tougher, the 49ers have a good group of running backs, are getting veteran play at the receiver position, and have a physical offensive line. Just in case anything happens to Kaepernick, Alex Smith is waiting in the wings. There isn't anything that the 49ers' offense can't do.

I have hated the Ravens all year, and that doesn't change here. I will say two positive things about them:

I love what the 49ers have done with Colin Kaepernick as their starting quarterback, even though I questioned Jim Harbaugh's move back when he made it. Win or lose, even if Kaepernick struggles, I won't question the decision to go away from Alex Smith.

There is one thing I haven't mentioned yet, and that is special teams. The last thing that the 49ers want is for this game to depend on the leg of David Akers in the final moments of the game. On the same note, can you imagine how tense of a feeling it would be for the players and the fans if the 49ers were down by two, in range for a 42-yard field goal with 0:03 to go in the game? 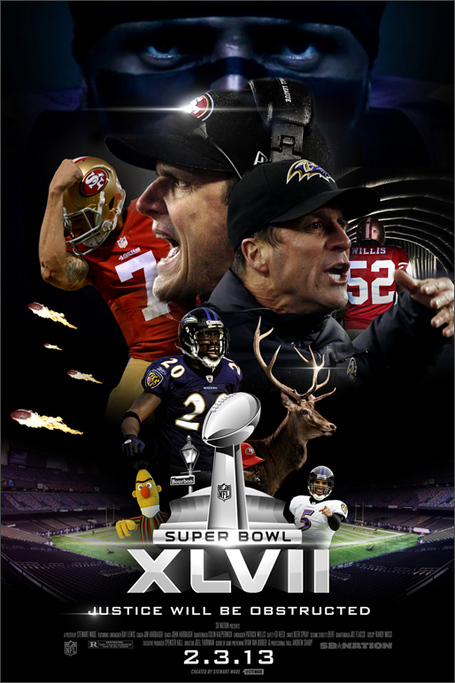 I'm not going to bank on that type of scenario taking shape. The Ravens have been built on inspirational play, but I credit Jim Harbaugh for being the better of the two coaches. One of the Ravens' best assets is the deep ball, and the 49ers' secondary should be well-equipped to cover Baltimore's receivers. The defensive front for the 49ers will be tough on the Ravens' ground game. To cap things off, Kaepernick will continue deliver in the face of pressure. It won't be a lopsided game the whole way, but I think San Francisco will put the game away mid-way through the fourth quarter.

Additionally, I'll take Colin Kaepernick to be the MVP, and for the pre-game National Anthem to go 2:20.

If you want to make your own prediction, please do so in the DBN Super Bowl XLVII Pick'em Thread! Go 49ers!