From 9:00 PM to 11:00 PM EST tonight, CBS will air the second annual edition of it's NFL Honors program, where awards from the Associated Press will be announced for the 2012-2013 NFL season. Although the Cleveland Browns didn't have anyone up for the traditional "big-name" awards, left tackle Joe Thomas is one of three finalists for the NFL's Walter Payton Man of the Year Award.

UPDATE: Sadly, Thomas did not win the award. Nonetheless, we congratulate Cowboys TE Jason Witten for being named the Walter Payton Man of the Year and taking home $100,000 for his charity. Thomas was still looking good in style at the ceremony, though: 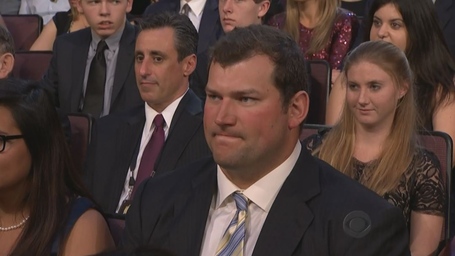 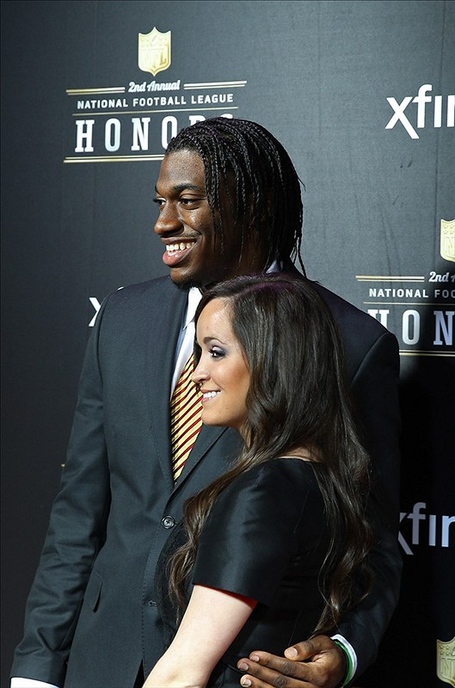 He may still be recovering from an injury, but the Redskins' RGIII, accompanied by his girlfriend, is accepting the Offensive Rookie of the Year Award. Credit: Mark J. Rebilas-USA TODAY Sports

Here are the awards for the NFL, as announced by the Associated Press.

Here was my ballot for the league's awards when the SB Nation NFL bloggers got together to vote:

The only one I ended up differing on from the rest of my colleagues; 11 voters picked Bruce Arians, while only 5 went with Pete Carroll.

Overall, I felt like this was an unfair race between two players in three categories: NFL MVP, Offensive Player of the Year, and Comeback Player of the Year. Peyton Manning and Adrian Peterson deserve each of those awards three awards. Ultimately, I favored the quarterback, but Peterson's final regular season game against the Packers almost changed my mind.

Someone deserves credit for the Seahawks being dominant at home, scoring 50+ points in two straight games, and securing a playoff berth with a third-round rookie quarterback. For me, the credit went to Pete Carroll. John Elway lured Peyton Manning. Anyone who has watched Peyton knows that he instantly turns a team into a Super Bowl contender. Beyond that, though, the Broncos had a team that is playing lights out on offense, defense, and special teams, until they met the Ravens.

Feel free to discuss the awards as they are being announced, or some of your predictions, in the comments section below. Let's hope Thomas wins the Man of the Year Award too!