Today, the Couch Cobra is mesmerized by...the switch to the 3-4

Flatfooted 270 lbs Sheard as an OLB is ridiculous. I want Ernie Sims!

Share All sharing options for: Today, the Couch Cobra is mesmerized by...the switch to the 3-4 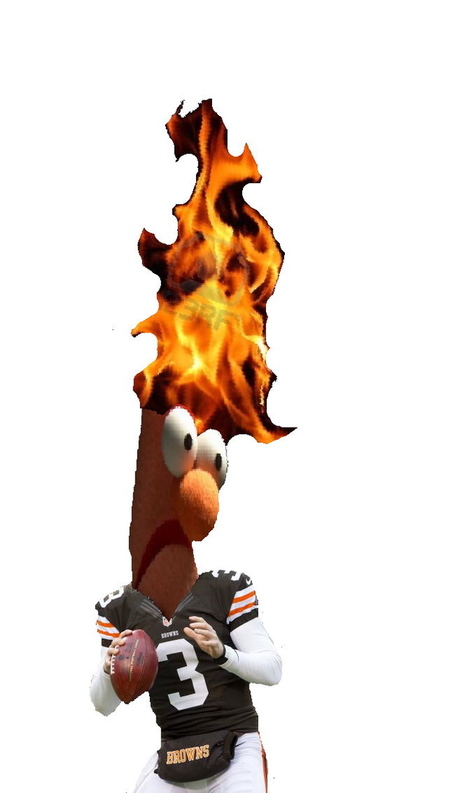 Pokorny is going to trust me with a weekly column. I am grateful for the opportunity and will try to put my best foot forward.

5 Things Regarding the Switch to the 3-4

1. I´ve heard rumors, that Chudzinski wants to move Jabaal Sheard to OLB. Jabaal Sheard is a flat-footed, 6 foot 4, 270 lbs, DE, who with that frame, if he added some weight, could succeed as a DT. Even if, like overnight, all internet-player-sourcing-sites report him as a svelte 6 foot 2, 255 lbs.

First of all, regarding what an OLB does. He covers the flats, from the Offensive Tackle to the sideline, and he has to blitz and be able to drop back into coverage zones, he shares with the secondary. Since he´s probably the best athlete on the team, he might be able to blow up lead blockers, occupy Offensive Linemen, shadow receivers on their routes, but usually he´s allowed to flow to tackle the ball carrier. Now, quite simply. Would you ask the shot putter to win the 110 meter hurdles for you?

Secondly. Why would they claim, that guys like Jabaal Sheard are qualified for the job then? Some short history. A few years back, they were praising the merits of the hybrid DE/LB. We got one, in David Veikune. How did that work out? It didn´t, and they refused to give him a shot at MLB. Then we went and got about three more similar proportioned guys, Roth, Fujita and Gocong. All in all, a raving success.

Anyways, what happened to the concept? It evaporated. Some teams are utilizing somewhat larger OLBs. But, the extreme success they predicted, of them shifting back and forth? Not really. That´s how the needle was threaded. Now, they can claim, that those linebackers are big. Pretty simple, huh? Ernie Sims is a great OLB. I still can´t believe, the Lions chose Levy, because Ernie failed to blow up the lead blocker. Ernie can demolish guys in the backfield, taking the best angles. Nope...

2. When we have the 3-4, they want to move our existing Defensive Linemen along the Defensive Front...I disagree. To operate a 3-4, you have to commit a Nose Guard. Do we have one? No. Can Phil Taylor do it? Yeah, but since I saw him run clear across the field to clobber that guy, you know, the incidence, that made Steeler nation sob like a bunch of wussies...He´s moving to DT. We have to get a real Nose Guard, in the draft, or in free agency. Either that, or one of our Defensive Linemen is going on a diet of Ben and Jerry´s.

3. According to what I said an OLB has to be able to do, I determine, that ours will be L.J. Fort and Tank Carder. Period. The end. Leaves what? Two inside linebacker slots to fill. Rey Maualuga and Bart Scott are free agents.

4. Complimentary cornerback to Joe Haden. We don´t have a set. You need a set. All great teams have a set. Who is worthy of playing opposite Joe Haden? Tyrann Mathieu is worthy. I´m not going to mince words. If not, Tashaun Gipson seems at least decent. Why was he moved to safety, when he played corner in college? Furthermore, I discern, that Trevin Wade looks like a FS. T.J. Ward is our FS. Quick deducement: We will use two Free Safeties, Ward and Wade.

Consequently, what positions must we draft? NG; ILB; ILB; and Thyrann Matthieu...every great team has a set. That´s where we start...Okay, maybe the Nose Guard first...

Hope I´m not coming on too strong for my first column. But the Sheard-to-OLB statement had me livid. I advise, everybody develop a foundation opinion for how our 3-4 will shape up. You lay the bottom bricks wrong, even a palace will be crooked.

Have a good week everybody!