In today's piece about free agents on the Cleveland Browns, we look at wide receiver Jordan Norwood. Norwood is not an unrestricted free agent, but rather an exclusive-rights free agent. 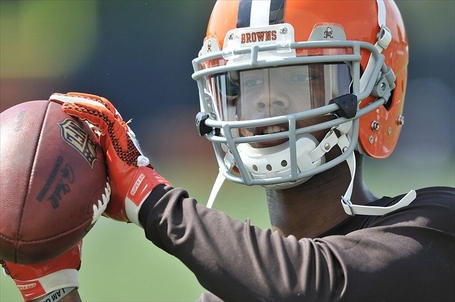 How and When He Joined the Browns: Norwood has actually had two stints with Cleveland. The Browns signed him in 2009 as an undrafted free agent, but he didn't make the final roster cut.

Productivity Level Last Season: He made the final roster out of training camp in 2012, but was inactive for the first three games of the season. When Mohamed Massaquoi suffered an injury in Week 3, Norwood was activated the following week against Baltimore, catching 4 passes for 56 yards. In Week 5, he broke out with 9 catches for 81 yards against the Giants.

Unfortunately, Norwood injured his foot during that game and was subsequently placed on the injured reserve (designated to return) list. Norwood began practicing during the final two weeks of the regular season, and he told reporters that he was healthy enough to come back. Pat Shurmur opted to leave him on injured reserve, so his season ended with just 13 catches for 137 yards.

Why Keeping Him Could Make Sense: I am a big fan of Norwood -- despite a couple of drops against Baltimore last year, he catches the ball quite well and is the shiftiest receiver on the team. If he can catch the ball in space, he can make some defenders miss. That type of style contrasts what Greg Little and Josh Gordon bring to the table, which is more of a physical or deep ball presence. When Norwood was with the Browns in 2009, Rob Chudzinski's reign as offensive coordinator had just ended the previous season. But, he was with Philadelphia for one year when Joe Banner was in the front office.

What the Browns Should Do: The exclusive-rights free agent (ERFA) label applies to players who have less than three accrued seasons in the NFL (i.e. 6 games or less on the roster or IR). In 2012, Norwood logged his second accrued season. Under the ERFA rules, that means that the Browns can offer Norwood a one-year tender worth $555,000, which is equivalent to the minimum salary for a second-year player. Because Norwood is an ERFA, if the Browns make an offer to him, no other team can sign him.

I think it absolutely makes sense to bring Norwood back. He is a guy who has shown a nice skill set that contrasts what is currently on the roster. If the Browns choose not to offer him a tender, he would then revert to being a free agent.

Now it's your turn -- vote in the poll below on whether or not the team should give the minimum tender to Jordan Norwood!