With everyone focusing on the 1st round (including me) I've been trying to divert some of my time and attention to the uncharted territory of "The 3rd Round". It's easy for fans and draftniks alike to say who we think is the best of the best in the first round, but you start to separate yourself when you can begin to pull out "gems" from the mid and later rounds. And since we don't have a 2nd round pick in April, per se, I am of the opinion that we must land an impact player with big upside in the 3rd round.

Based on Joe Banner's comments to the media this week regarding last season's performance on defense - where among all NFL teams the Browns' were ranked 11th in sacks; 11th in interceptions; tied for 8th in forced fumbles; 24th in total points allowed allowing 302 points; 13th in pass deflections; and 24th in points per game at 18.9 points - I suspect and believe defense will remain the focus of the Browns' brain trust as we enter into the 3rd round.

If you haven't, I suggest you check out Jamie Collins. I absolutely love this kid's fit in Horton's defense. He jumped off the tape as an explosive athlete who I feel can effectively translate his college skills to the next level. He can function as a pass rushing specialist, help stop the run or drop into coverage. He's long and lean and has been on several teams' radar as a mid-round "gem" for a while now. 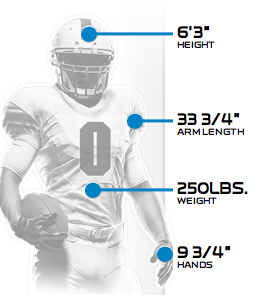 @ChrisSteuber: He stood out today. Great athlete, but still developing. Could be a 3-4 steal. RT @Eagles_Tarheels and what r ur thoughts on Jamie Collins?

Jaime Collins was a very productive OLB who just so happened to play for a bad team at Southern Mississippi University. He was selected First Team All-Conference USA (Coaches selection) for the 2012 college football season. Collins led the team in tackles in 2012 with 92 and also ranked first in C-USA in tackles for loss (20.0) and third in sacks (10.0), which both rank fifth on the school's single-season chart. His tackles for loss number currently ranked tied for No. 7 in the country, while his sack total was 21st nationally.

I think in the clips posted below you'll see a versatile, yet dominate, player who got to the QB and showed the ability to stop the run and make strong tackles. He almost picked up and flipped the RB over backwards in the Western Kentucky game around he 34 second mark.

He jumped off the film to me as a kid who definitely has closing speed once free from his blocker. He showed the versatility to play standing up as an OLB or down as a DE with a hand on the ground. He showed the ability to frequently drop back into coverage, lining up in the slot or over the tight end. He seems comfortable doing this but plays a little stiff / upright and will need to work on his footwork and change of direction in coverage at the next level. He has some room to grow into his frame and may need to bulk up if he wants to be an everydown LB in the NFL. He showed some trouble pursuing change of direction type players but I feel he is perfectly suited to get to the passer at the next level from the OLB spot and shows explosion behind the LOS in pursuit of the QB; he has decent bend on the edge and his long arms help him reach the passer or runner as he finishes tackles with good form and power.

I once again call on John Pollard over at STATS, the world leading sports information and technology company, to help me draw a comparison among Collins the other NFL Combine LB prospects in a couple of areas: 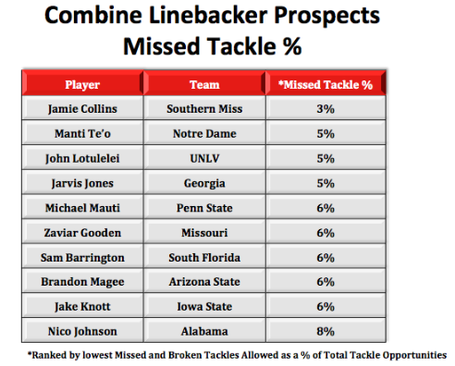 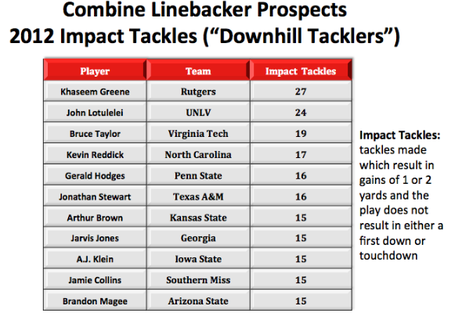 Jaime Collins might not be a first round prospect, but he looks the part of an absolute steal of a third round pick for the Browns' if he's there when we pick or if we are able to orchestrate a trade down scenario to get into the 2nd round. Collins would have huge upside in Ray Horton's 3-4 attack defense where he wants "little guys who can hit and big guys who can run" because Collins plays with a little bit of both. Coupling Collins with Mingo, Jordan, or Ansah - or even crazier yet, in a trade back scenario where we land a guy like Jonathan Cyprien and Sio Moore - would get me really excited about the youth and talent of the Browns' defense moving forward.

Jamie Collins feature from Jackson Mississippi News Station 16 - scroll to 1:27 into the clip