In today's piece about free agents on the Cleveland Browns, we shift to the tight end position, starting with veteran Benjamin Watson. 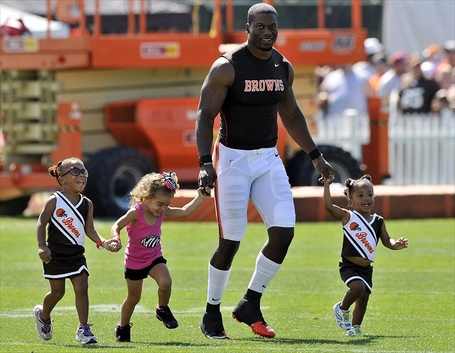 TE Benjamin Watson with his family back at training camp this past year. Credit: David Richard-USA TODAY Sports

How and When He Joined the Browns: In former general manager Tom Heckert's first year with the team in 2010, one of his first free agent moves was to sign Watson to a three year deal worth $12 million. Prior to that, Watson had spent six years with the New England Patriots.

Productivity Level Last Season: It was a fairly productive season for Watson, as he played in all 16 games, catching 49 passes for 501 yards and 3 touchdowns. To compare, he was tied for the second most receptions in his career, and had the third most receiving yards in his career.

Why Keeping Him Could Make Sense: Here's one big reason: not including departing free agents, the only tight end on the team is Jordan Cameron, a guy who hasn't exactly proven himself as a starting tight end. Watson won't be elite and doesn't have the best hands in the league, but he's pretty sound at everything he does.

What the Browns Should Do: Watson will be entering his tenth year, and he hasn't had many injuries since joining the Browns. He posted career highs in 2010 with the team when he had 68 catches for 763 yards and 3 touchdowns. Knowing Rob Chudzinski's experience with tight ends, I think he'd like to use Watson.

It would be great if Cleveland could sign him to something like a two-year deal worth around $7 million, which would be a slight decrease from his previous contract (3 years, $12 million). It would give Cleveland the flexibility to have a reliable veteran for the next year or two while trying to find a young, stud tight end, whether that be Cameron or somebody in the draft.

Now it's your turn -- vote in the poll below on whether or not the team should re-sign Benjamin Watson!