The 2012-2013 NFL season comes to a close today when the San Francisco 49ers take on the Baltimore Ravens in Super Bowl XLVII. The game will kickoff at 6:30 PM ET on February 3, 2013. This is a reader's digest for everything you need to know about today's game. 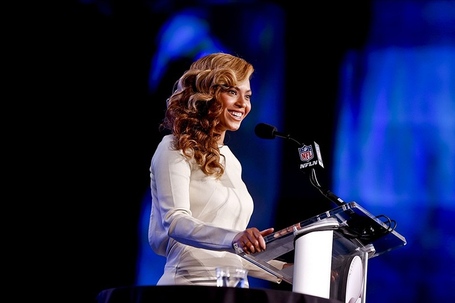 The National Anthem will be performed by Alicia Keys, and the current over/under bet on the length of the performance is 2 minutes, 10 seconds. Two years ago, the over/under on Christina Aguilera was 1 minute, 54 seconds, and that ended in a push. Last year, the over/under on Kelly Clarkson was 1 minute, 34 seconds, and that also ended in a push. These oddsmakers must know something. I'm banking on Keys' performance going over the current length.

Super Bowl XLVII's halftime show will feature Beyonce as the headline artist. Pop fans will be in for a treat Sunday night, as Kelly Rowland and Michelle Williams will take the stage with Beyonce, reuniting the trio who will once perform as Destiny's Child. There has been some controversy around Beyonce, but she silenced some critics with a great rendition of the National Anthem in front of the media this past week:

Three Things to Know About the Baltimore Ravens 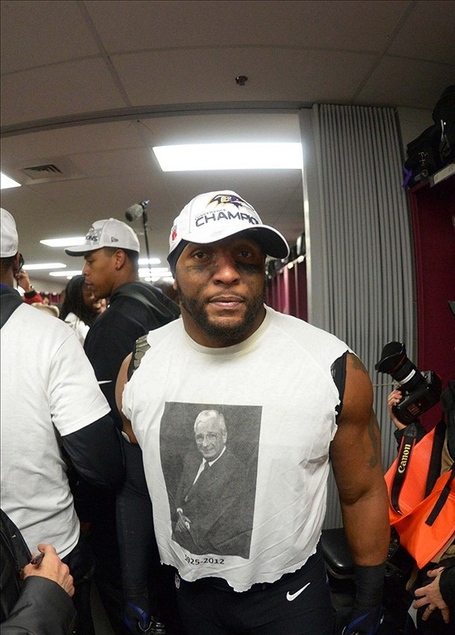 1. "Destiny" - Call it whatever you want, but it is almost like it is the Ravens "destiny" to win the Super Bowl. You can map out the Ravens' season full of tragedy, heartbreak, and hope unlike any other.

2. Offensive Improvement Under Jim Caldwell - You wouldn't think that a late-season change for a playoff team at the offensive coordinator position would be the right move, but whatever Jim Caldwell has installed has done wonders for the Ravens' offense. The utilization of Ray Rice and Bernard Pierce has been much improved, but the real story has been the play of Joe Flacco.

Flacco hasn't thrown an interception in the playoffs and has thrown 8 touchdowns for a QB rating of 114.7. In the passing game, Flacco throws one of the best deep balls in the game. There always seems to be one drive in the game in which Anquan Boldin become "the" guy. I don't care what cornerback is on him when he's on a roll -- Boldin can shield off defenders and catch the ball in a tight window among the best of them.

3. Clutch Kicks and Returns on Special Teams - The Ravens have one of the best young kickers in the NFL, and return specialist Jacoby Jones has made a lot of teams pay on kick and punt returns. The Super Bowl often comes down to big kicks, though, and Justin Tucker already has the resume to be up for the challenge: 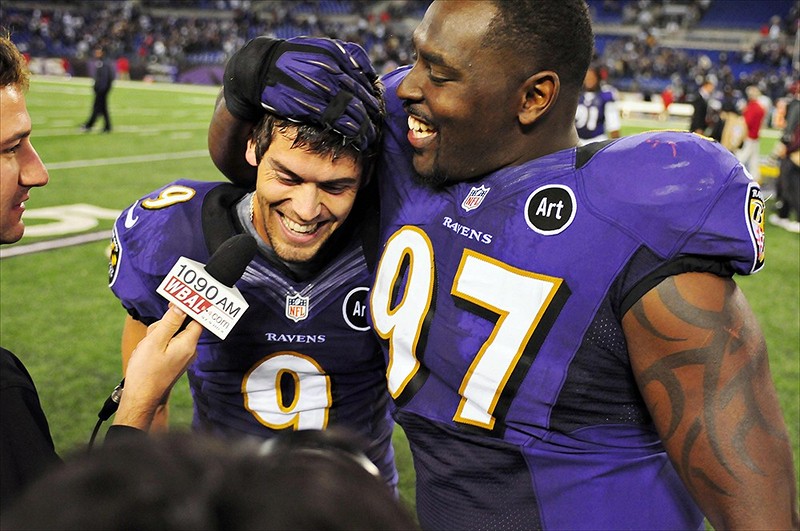 Ravens rookie kicker Justin Tucker is only 23 years old, but dealt with the pressure like a poised veteran. He nailed 30 out of 33 attempts (91%), including all four of his attempts at over 50 yards, with a long of 56 yards. He went two of two in the Ravens three playoff games. Tucker also had 49 touchbacks on 88 kickoffs. Tucker proved his composure by hitting the game-winners in critical games over the New England Patriots on the last play of the game as well as overtime kicks against the San Diego Chargers and in the AFC Divisional Round of the playoffs against the Denver Broncos.

Three Things to Know About the San Francisco 49ers

1. The "X-Factor" Directed by Jim Harbaugh - Behind the brilliant offensive schemes that Jim Harbaugh and offensive coordinator Greg Roman have deployed, Colin Kaepernick became one of, if not the most dangerous quarterback in the NFL. 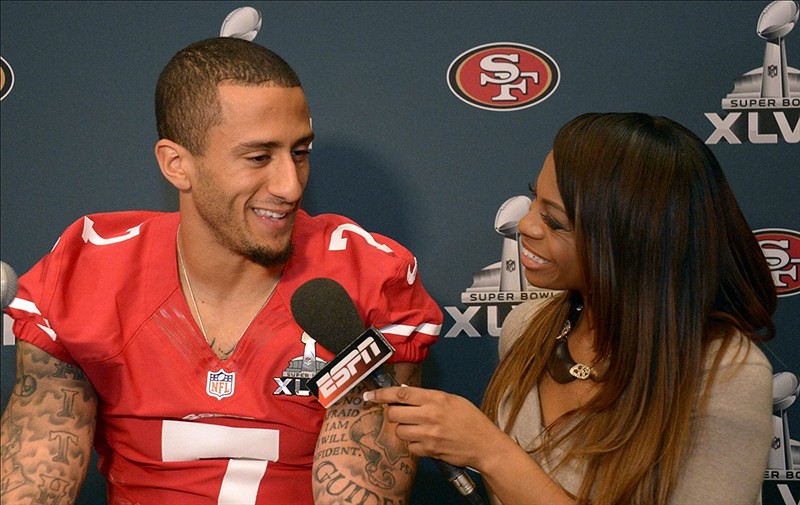 49ers QB Colin Kaepernick is poised to be the difference between the team falling short last season with Alex Smith vs. winning the Super Bowl this year with him. Credit: Kirby Lee-USA TODAY Sports

Not only does Kaepernick possess one of the best fastballs in all of football, his running ability is unlike any other, and it's not because he has to run. He picked his times wisely against the Packers a few weeks ago and broke an NFL record for quarterback by running 16 times for 181 yards and 2 touchdowns. Last week against the Falcons, he was more than happy to fool the Falcons into thinking he could run; he only took off 2 times for 21 yards. Instead, he watched the likes of Frank Gore and LaMichael James go off for 124 yards and three touchdowns.

Harbaugh referred to Kaepernick as, "the best player in the 2011 NFL Draft." He got him in the second round that year, and I think he might end up being right. 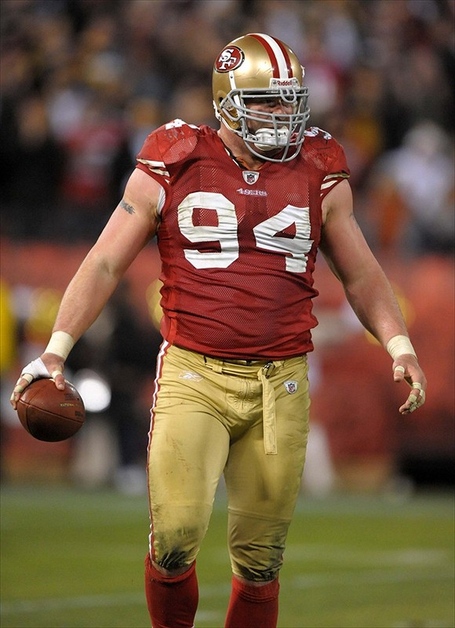 49ers DL Justin Smith if a force on the defensive side of the ball. Credit: Kirby Lee-USA TODAY Sports

2. Physical Defense Ready to Thrive - The 49ers' physical style of play was evident during the regular season, when they were 3rd in the league in yards allowed. Statistically, it might not seem as though that has carried over to the postseason. When you consider what they did against the Falcons in the NFC Championship, though, it shows how they can help carry San Francisco in the face of adversity: they shut Atlanta out for the entire second half, allowing their offense to rally for the lead with 14 unanswered points. This unit will be up to the task of stopping Joe Flacco's deep passes, unlike the Broncos.

3. The Stats Don't Lie - While the Ravens might be relying on inspiration to win, the 49ers are relying on their pure talent at every position. Over at Niners Nation, they did a deep statistical analysis on the game; here is the summary of their results:

The Ravens have been built on inspirational play, but I credit Jim Harbaugh for being the better of the two coaches. One of the Ravens' best assets is the deep ball, and the 49ers' secondary should be well-equipped to cover Baltimore's receivers. The defensive front for the 49ers will be tough on the Ravens' ground game. To cap things off, Kaepernick will continue deliver in the face of pressure. It won't be a lopsided game the whole way, but I think San Francisco will put the game away mid-way through the fourth quarter.

Additionally, I'll take Colin Kaepernick to be the MVP. You can read our full preview for the game here.