In what will undoubtedly leave a sour taste in the mouths of Cleveland Browns fans, the Baltimore Ravens won their second Super Bowl in franchise history, defeating the San Francisco 49ers by a score of 34-31. Personal hatred withstanding, this game definitely lived up to the big-stage hype. Here are a few notes from the game:

Although he was a goat as a member of the Houston Texans last year, Ravens kick returner Jacoby Jones was the difference maker in a season of triumph for the Ravens. Not only did he have the prayer fourth-quarter reception against the Broncos several weeks ago, he came through in the clutch on the biggest stage of all. Near the end of the second quarter, Jones caught a 56-yard touchdown pass from Joe Flacco that involved Jones making some nifty moves after the catch. 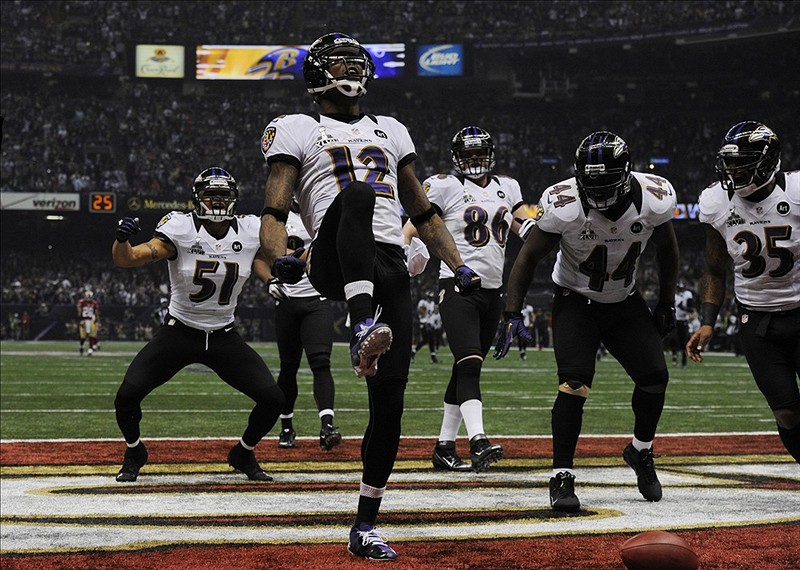 Ravens WR Jacoby Jones was the real MVP for the Ravens after catching a touchdown and opening the second half with an 108-yard kick return for a score. Credit: Robert Deutsch-USA TODAY Sports

To open the second half, Jones returned a kickoff 108 yards for a touchdown, giving the Ravens their largest lead of the game at 28-6. As we saw, that ended up being Baltimore's only touchdown of the second half. Without that play, they might have lost a close one. Flacco might get the credit of Most Valuable Player, but while he did have a great first half, my vote definitely would've gone to Jones.

Lights Out in the Superdome

One of the most memorable things that will stand out from this game is the power outage that lasted about 34 minutes. When you factor in overall game time, it delayed the action significantly. On CBS, the show Elementary was supposed to start near 10:00 p.m. EST, but the game itself didn't end until close to 11:00 p.m. EST. Our team at SB Nation has all of the latest coverage on the power outage situation.

The extended break definitely lit a fire under the 49ers, who ripped off 17 unanswered points to close out the third quarter. Unfortunately, their comeback fell just short.

There were some tough moments for quarterback Colin Kaepernick in the first half, but he more than delivered in the second half. He finished the game with 302 yards passing, 1 passing touchdown, and 1 interception to go along with 7 rushes for 62 yards and 1 rushing touchdown.

The thing that 49ers fans will be talking about is the ending sequence to the game, when the team looked to have all of the momentum after a big run by Frank Gore. After the two-minute warning, the play calls consisted of a shifting the pocket play, and a failed quick-hitter attempt to Michael Crabtree. On fourth down, the Ravens brought an all-out blitz. Kaepernick threw the ball up for Crabtree, who was getting mugged by cornerback Jimmy Smith. 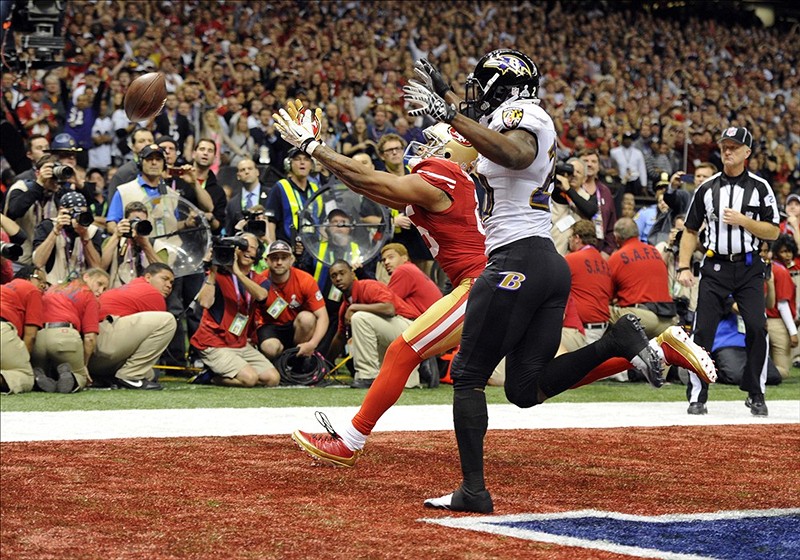 49ers fans should debate this play for awhile. Although it's not seen in this picture, wide receiver Michael Crabtree was held while the ball was in the air. Credit: Robert Deutsch-USA TODAY Sports

Despite Phil Simms (and the officials for that matter) being blind, a penalty should have been called to extend the drive. At least the officials don't have a million replays to watch like Simms; there's no excuse for him.

What Did You Think of the Game?

Ray Lewis might have won a Super Bowl in his final game, but he was an absolute non-factor (and, in fact, a liability) on defense. Lewis' career is over, and Browns fans don't have to worry about his ridiculous antics any longer. I shamefully post a sight I had hoped I'd never see again: 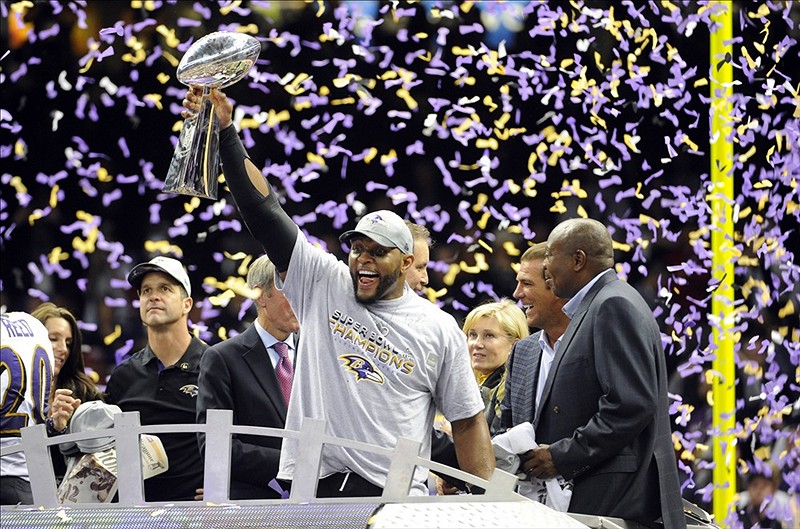 Ravens LB Ray Lewis hoists the Lombardi Trophy one last time before he retires, capping an incredible four-game stretch for Baltimore since he announced his intent to retire. Credit: Robert Deutsch-USA TODAY Sports

For other notes, I'll give a lot of credit to Ravens receiver Anquan Boldin, and I'll give the goat of the game to the 49ers' LaMichael James. What did you think of the game in general, Browns fans?