Looking at Who Cleveland Browns Fans Support, According to a Facebook Study

Share All sharing options for: Looking at Who Cleveland Browns Fans Support, According to a Facebook Study

A couple of days ago, I saw a data and research article published on Facebook, titled, "NFL Fans on Facebook." The study broke NFL fans down by counties for all 32 teams. 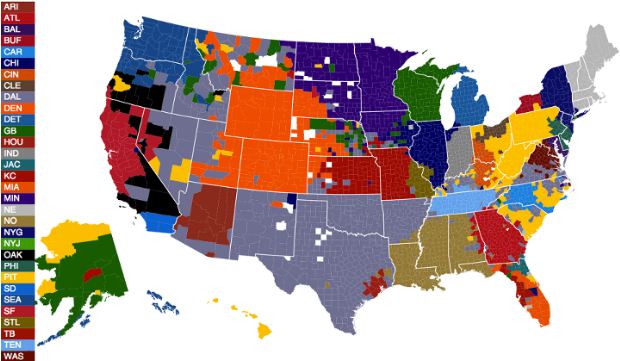 Although it might be difficult to distinguish certain teams due to the low resolution of the map, the only counties that contain a majority of Cleveland Browns fans are in the northern half of Ohio. Some states are dominated by a certain team -- for example, Minnesota is all Vikings and Wisconsin is all Packers. Ohio is a mix between the Browns, Cincinnati Bengals, and (ugh) Pittsburgh Steelers. At least none of the counties in Ohio are supporting the Baltimore Ravens yet.

The article also explores which teams fans in each county supported during the NFL playoffs. During Wildcard Weekend and the Divisional Round of the playoffs, Cuyahoga County mostly supported the Green Bay Packers. Once the Packers were eliminated, the support shifted to the New England Patriots in the Championship Round. For the Super Bowl, I think the map shows Cuyahoga County supporting the San Francisco 49ers, with the counties to the left of it supporting the Baltimore Ravens.

The article also looked at "Fan Friendships" among each team's fanbase. In other words, if you are a Browns fan, which teams are your friends fans of (not including the Browns)?

According to the data, Browns fans' most common fan friends include (in order) fans of the Pittsburgh Steelers, Cincinnati Bengals, Dallas Cowboys, Green Bay Packers, and New England Patriots. In most cases, the reverse is not true. For example, Browns fans do not appear in the top five for the Steelers. In fact, the only "common fan friends" that the Browns appear in is Cincinnati's, where Cleveland ranks third.

Back in August 2012, Dawgs By Nature member Kimble_79 mapped out where Browns fans specifically are located within the United States.

Are there any pockets of fans in Facebook's data map that you find unusual? It was interesting, and sickening, to see the allegiance of Pittsburgh go all the way to the likes of Alaska and Hawaii.