The work of Pixar's Austin Madison has been making the rounds across the Internet over the past two days. Madison has worked as an animator on films such as Ratatouille and Up. Throughout the season, Madison decided to do some pretty awesome awesome sketches to preview NFL games at his blog. All of his work related to the NFL can be found in the album below.

My personal favorite was the Buccaneers vs. Redskins one. And, although I hate the Ravens, the symbolism of the one against the Patriots was pretty cool. One of Madison's sketches depicted the Browns, when he featured their game against the Colts: 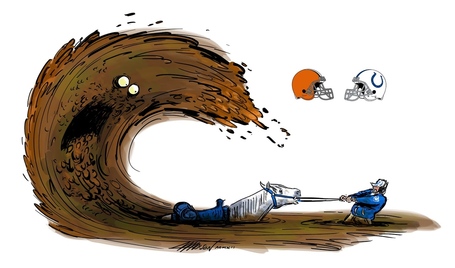 The Browns one isn't nearly as cool as some of the other ones, and quite frankly, it's tough to tell exactly what the Browns are supposed to be. For some teams, it's easy to depict (i.e. the Giants are...Giants). The Browns look like a pile of mud. Madison acknowledged this when he did the drawing:

I have no idea what a 'brown' is, but I wouldn't want to incur its wrath. Something tells me Coach Pagano will feel Atreyu's pain today.

What do you think of Madison's drawings? Which one is your favorite?