In today's piece about free agents on the Cleveland Browns, we move to the defensive side of the ball, starting with defensive end Juqua Parker. 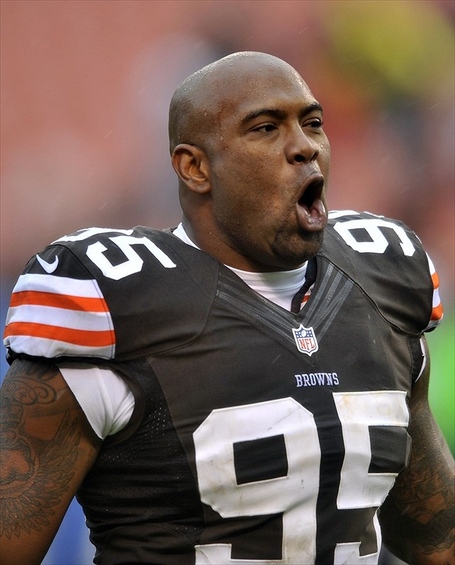 How and When He Joined the Browns: Last year, Tom Heckert signed two players in free agency, both of whom were defensive ends. One of those defensive ends was veteran Juqua Parker, who Heckert had known from Philadelphia. Parker only agreed to a one-year deal, so he's already a free agent.

Productivity Level Last Season: The signing of Parker actually paid dividends for the Browns. He played close to half of the team's defensive snaps, despite not making any starts, and registered 24 combined tackles, 6 sacks, and 2 forced fumbles. Parker's six sacks were second on the team, only behind Jabaal Sheard.

Why Keeping Him Could Make Sense: He's not stout against the run, but he's a good situational pass rusher. Pro Football Focus ranks him as the ninth-best free agent edge rusher available this offseason, citing that he generated more pressure than any defender on the Browns last year.

What the Browns Should Do: Parker was perfect for a one-year rental, but he really doesn't fit the changing defensive schemes in Cleveland. He had a $1.4 million base last year and earned $1.6 million in incentives, bagging a total of $3 million.

I wouldn't project Parker as an outside linebacker at all, and Cleveland needs to focus on adding some depth on the defensive line who have experience in the 3-4. That isn't Parker.

Now it's your turn -- vote in the poll below on whether or not the team should re-sign Juqua Parker!