Per multiple sources (including Harrison's agent) Pittsburgh Steeler's OLB James Harrison may be of interest to the Cleveland Browns. The question is, at what price would you consider him a valuable addition?

Share All sharing options for: James Harrison a real possibility for Browns?

From the mouth of babes: 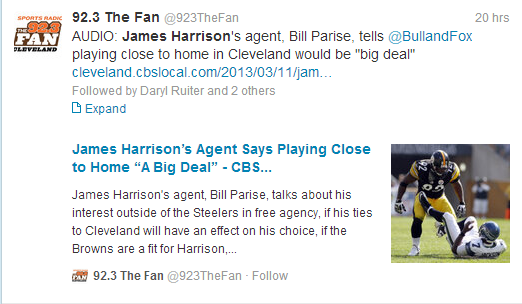 "Cleveland should be able to get Harrison if the team wants him. The Browns need a pass-rushing linebacker, and they are one of the teams that don't have cap concerns. There is also the connection of new Browns owner Jimmy Haslam, who was a minority owner for the Steelers. But the Browns have so many options when it comes to addressing the pass rush, from Kruger to Detroit's Cliff Avril to the draft (Oregon's Dion Jordan and Georgia's Jarvis Jones). So the Browns don't exactly need Harrison, either. "

Cleveland went into the offseason with one potential starter (Jabaal Sheard) and one potential depth option for 3-4 OLBs. The inside linebacker options are easier to fill, with D'Qwell Jackson, JMJ, Craig Robertson, Emmanuel Acho, and Chris Gocong all available. If the Browns use the draft as a potential way to fill the openings, there's still a lot of need for a rotation on this squad, so there is a slot for Harrison should the Browns brass be interested in him. The questions about Harrison are about how much he has left in the tank, as well as how expensive his services would be. (Does he want to be paid for the player he was in his prime, or the player he is today?)

As free agency continues to mount towards a fever pitch, look for (legitimate) reports out of Berea that would indicate a legitimate interest in bringing Harrison in. At the very least, as previously noted, it would be entertaining to watch him interact with folks on the sideline after concussing and permanently altering the career of multiple Browns players.