The lone remaining player from the 1999 Cleveland Browns team is officially gone. Phil Dawson said his goodbye to Cleveland fans today via Twitter, and then announced that he would be joining former Browns special teams coordinator Brad Seely as the new kicker for the San Francisco 49ers. It was a move that, while not rumored at any point since the start of free agency, seemed rather logical, given the release of David Akers a couple of weeks ago.

"Hey, Cleveland: thank you for a tremendous ride," said Dawson, acknowledging fans over Twitter. "Your love, support & encouragement have blessed me deeply. Playing for you has been one of the great joys of my life, and I wish you all the best. I am humbled and thrilled to have the opportunity to continue my career with my new team, the San Francisco 49ers!"

The 49ers announced that Dawson agreed to a one-year deal. Tom Withers, who typically covers the Browns for the Associated Press, posted these comments to Twitter following the news of Dawson's departure:

Dawson is a class act. He had promises made to him and broken by every regime with #Browns.

Before he left, Dawson showed me where he wrote "Phil was here 1999-2012" on inside of cabinet where he kept cleats. "Prison style," he said

Here is Dawson signing his one-year deal with the 49ers:

Kicker @phil_dawson_4 signing his one-year contract with the #49ers. twitter.com/49ers/status/3…

Yesterday at the NFL's Annual League Meeting, Joe Banner would not address the possibility of signing Dawson, instead stating that whenever Dawson signed somewhere, he'll "happily explain why he's been reluctant to answer that question," adding that he believed it would be a reasonable answer.

My guess is that there are multiple parts to the equation. Dawson probably loved Cleveland, but wants the opportunity to compete for a Super Bowl before he retires. He has given more than enough to the Browns. At the same time, the Browns probably did not want to commit money to an older kicker for a "short-term solution," believing it would be better to go the route of the Baltimore Ravens and find some new blood. The Ravens struck gold with undrafted free agent Justin Tucker last year; can the Browns do the same with a kicker in 2013?

Side note: while this might feel like the "apocalypse," I mean that as a "punch in the gut." I'm disappointed that Dawson has to leave, and I think he should have been brought back if he was agreeable to a return. With that said, I am not going to hold a grudge with the front office over their decision. As tough as it might sound, hopefully we can find the next "Dawson" sooner rather than later.

Also, I do have to wonder if 49ers fans are already under-appreciating the value that Dawson will bring to their team this year. I mean, just look at this: 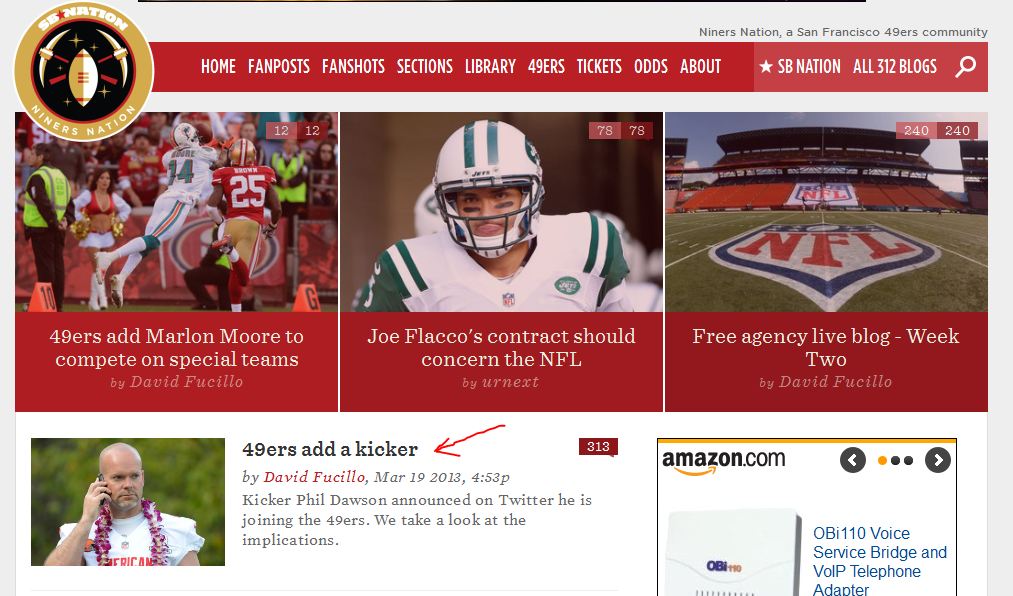 That is from our 49ers affiliate, Niners Nation. They signed Phil Dawson, and he doesn't even get the "pimp slot" at the top of the site? On top of that, the way that David Fucillo, lead editor of Niners Nation, chose to end his post about the team signing Dawson with the following statement: "Dawson struggled a bit in 2010 and 2011, but bounced back strong last year."

In 2011, Dawson did not struggle. He was 24-of-29 on kicks, but 3 or 4 of those attempts were either blocked, or botched due to terrible snaps by the now-released Ryan Pontbriand. Unimpeded, he probably missed one or two kicks all season.