Share All sharing options for: Trent Richardson and Ozzie Newsome Eliminated in First Round of Madden Vote

Peyton Hillis certainly turned Cleveland fans off to the thought of voting their players on to the cover of Madden in the future, eh? The first round of voting for who will be on the cover of Madden 25 is complete, and Trent Richardson and Ozzie Newsome were both beaten by their counterparts. This year, the theme is "old-school vs. new-school," with the final round of voting featuring the winners from each bracket.

For the new-school players, Richardson squared off against the Packers' Clay Matthews. Richardson received 39% of the votes, compared to 61% for Matthews.

The old-school players did not feature as closely contested of a race, as Newsome was up against Kurt Warner. Newsome had 26% of the votes, compared to Warner's 74%. I think the voting is a bit flawed if you're going to do a true "old-school bracket." I know Warner is retired, but he was still playing a few years ago. The bracket should be reserved for players who are a decade removed from the league, at least. Former Browns quarterback Jake Delhomme (why?) was also in the old-school bracket and lost to Joe Montana. Big shocker there, eh?

Voting for round two is now open. Who do you see emerging as the two finalists? My money is on the finals featuring Ray Lewis going up against the Vikings' Adrian Peterson. 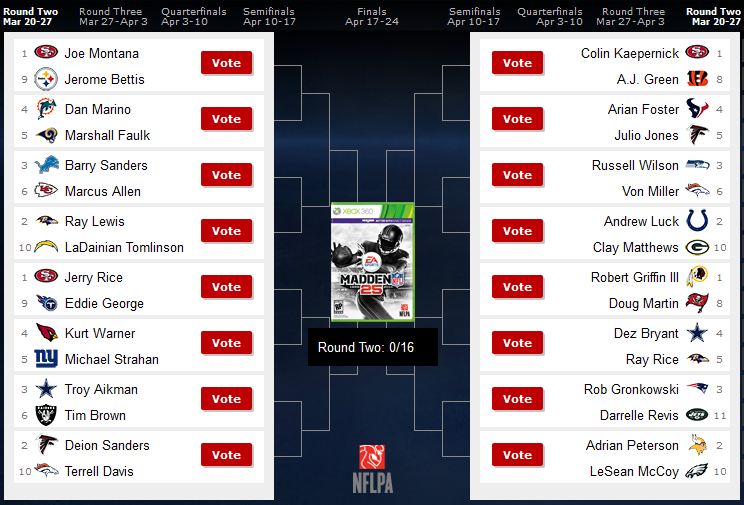