In an NFL.com article posted last April, Browns' current General Manager Mike Lombardi weighed in on the six draft philosophies he learned from the master, Bill Walsh. I came across this article thanks to Brendan Leister over at DraftBrowns.com who tweeted about this find this evening:

This is a fascinating read that outlines draft philosophies and characteristics that we might expect Mike Lombardi and the Browns to demonstrate when evaluating and picking talent in the NFL Draft: 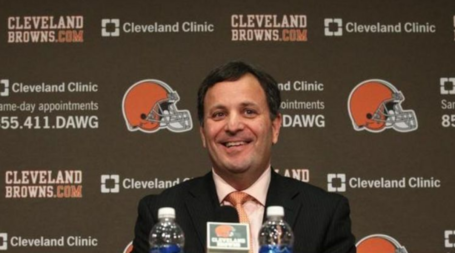 The first point is interesting because we often hear fans saying this guys isn't worth a first round pick or a second round pick, or this guy was a reach. I believe in this philosophy as described in the article, a player is judged to be a good or bad pick only years down the road, not on draft day, or in his first season. A player will never be defined by what round he was taken in, rather by how her performs on the field. John Hughes could turn into a perfect example where fans had no idea who he was and thought he was a reach and a wasted pick, but his performance thus far has been productive and his value to the team seems to be defined more by what he does on game day than where he was taken in the draft last April.

The second philosophy is more for scouts and people in the business hanging their evaluations on the belief that talent is hard to find in the draft or are afraid to put themselves on the line for a guy they really like or don't like.This can be heard and seen in this years draft when describing the offensive vs defensive talent pools, respectively. You have heard me say that this is a deep defensive draft and not so deep offensive draft. But that doesn't mean there's not good players to be had in all rounds.

The third philosophy is again aimed at scouts and talent evaluators more than fans, but this is a hot topic for the Browns given our past trade down decisions. This year, with Josh Gordon representing our 2nd round pick, but with a ton of talent to be had in the 2nd round, many fans, including myself, are hoping we can orchestrate a trade down. I don't want to do this because I'm afraid to take who's on the board at 6 in fear they'll be a bust, or because I don't think there's enough talent available at the top of the draft, but I'm in favor of this approach this year because I feel there's a better chance we can acquire more talent to fill positions of need.

The one year wonder philosophy is pretty self explanatory and I think most fans will agree with that a flash in the pan doesn't always mean gold!

The last philosophy is one I think the Browns are in a very good position to demonstrate with any of their picks this year and all their additions to the coaching staff. In fact, to the chagrin of many fans, Haslam came out and said we won't go 13-3 this season, which seems to support the notion that there will be a learning curve in the new system. In fact, take a listen to this interview from Ray Horton from when he was introduced as the new Defensive Coordinator in Arizona two seasons ago. He talks about how complex his system is and how his expectation is that it takes his players at least a season to really learn and grasp. In fact he talks about the big learning curve from the system in Pittsburgh stating that "Very few rookies start".

The good news is that we have solid depth and young talent at almost every position that will be learning the system this season. Thanks to free agency we have been able to address some glaring needs and add depth at other positions on defense. Whoever we draft at 6 or in any of the rounds, will have the ability to come into the system, learn it while not having to worry about being "the guy" from day one. That being said, I think whoever we take at six will be able to perform immediately and we should expect that as fans. Coaches, on the other hand, may be willing to take a much more methodical and reserved approach to rookie evaluation, a la the apparent support from Chud today in developing Brandon Weeden.

Lombardi also shared some of the philosophies of Bill Belicheck here in another NFL.com video from last April. During this interview, Lombardi discusses the reasons behind the Patriots trend of trading down; Bill's philosophy of building a team not just amassing talent and how important this was; and much more. We've heard both Lombardi and Banner mention the notion of "building a team" during Mike's introductory press conference earlier this year. Mike appears to be a quick learner who has been provided with several excellent teachers during his career. Browns fans can only hope Lombardi can execute what it is he's learned along his long road back to Cleveland.

Regardless, I hope these articles helped to give fans a better insight into the beginning of the ever evolving Lombardi and Banner draft philosophy.