Earlier, I took a look at the vertical nature of the Air Coryell offense and offered some insight into it's playcalling terminology. Now, let's take a look at how the quarterback reads our series. Note that each of these plays can be run from the same formation (Split right), the same protection (Scat right), and has the same route stems--all four plays will look the same to the defense to begin the play: 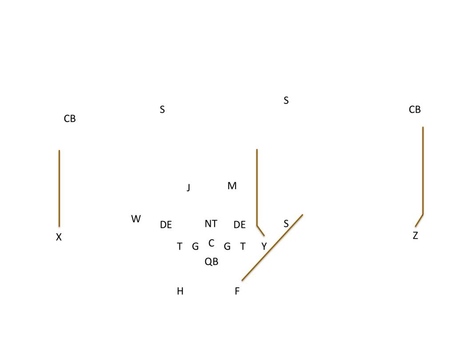 Teaching the QB where to go with the ball

The reads for all four of these concepts are...similar. The QB is "peeking" at a deep WR route, then going from F to Y. These four plays are designed to get simple, efficient passes for the QB where the ball doesn't have to travel very far (making for an easier throw). Reads may differ from team to team but I have seen an old Zampese clinic on this series and he had his QBs reading this progression (look to first guy, then second guy, then third guy).

Let's look at 839 F flat. The 8 route for an outside WR in this play is going to be a skinny post, which is designed to attack a defense that rotates it's safeties away from the X receiver: 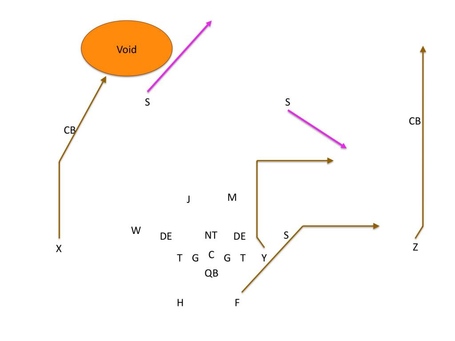 If the QB sees the safeties rotate that way he will throw the 8 and punish the defense for bringing an extra safety in the box. If the WR wins before he runs into the safety's zone the offense is looking at a 20+ yard gain. That's good risk-reward.

If the safeties do not rotate that way the quarterback will eliminate the 8 route. He wants to make a decision ASAP because the window of opportunity for F and Y will close quickly.

F is running a flat route off of the outside hip of Y. He'll flatten out at 3-4 yards. Y will inside release, push vertical for 7-10 yards, and break out toward the sideline. With Y's inside release, the offense is hoping to pull the Sam linebacker inside, making him late to get out into the flat to cover F: 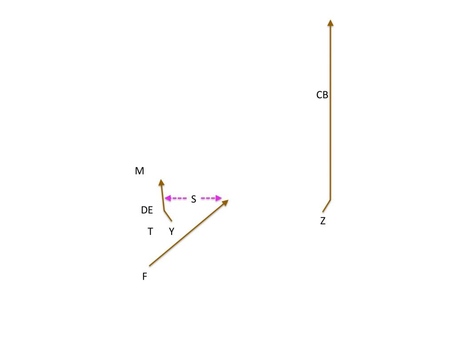 If the Sam linebacker doesn't get pulled inside but jumps into the flat to take F, the QB will throw it over him to Y breaking out. The second backer should be the only one who can defend this route and he has to come from the inside, has an inside run responsibility, and has to worry about Y breaking in multiple directions. 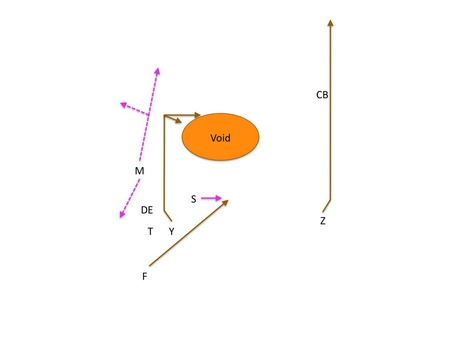 With the Sam linebacker in a high/low bind and the strong safety out of the way (remember the "peek" read to the WR), the remaining defender that can impact this play is the strong side CB. The Z receiver runs a 9 but he is really trying to deal with this corner. Z's forced outside release is a critical detail.

By taking a forced outside release, Z is trying to turn the CB out toward the sideline and away from F's route. At worst, he should be letting the CB ride him all the way into the bench to clear room for F. 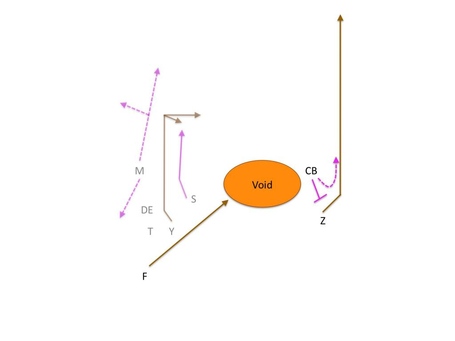 Depending on the skill of the QB and WRs, the offense may want Z to get behind the CB and be a legitimate threat to catch the ball. Vs a press corner the WR could be facing man or a Cover 2 zone. Vs man, the Z could run up the sideline for a fade/back shoulder fade (think Aaron Rodgers and the Green Bay Packers), and against cover-2 he could sit down in the gap between the SS and CB.

These are tougher throws, but they can be great options for an aggressive offense that really wants to open up the middle for F and Y and to take shots down the field.

If Z takes an inside release on this play it is a cardinal sin. With the corner pressing and turning inside, his eyes and momentum will take him right to F. F's head will be turned back to the QB and the corner will have a chance at a highlight hit if the pass is thrown. 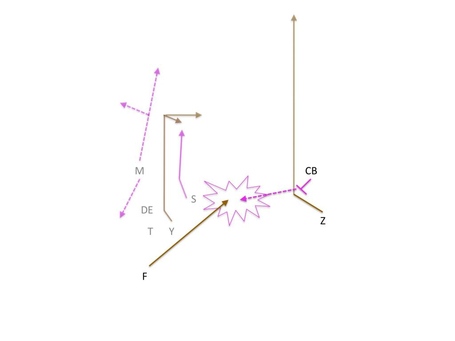 If the routes are run correctly and the quarterback makes good reads, these passing plays can provide options against every coverage. Sometimes the offense will take shots down the field (like throwing the 8 route to the X receiver) but there are high-efficiency, easy passes and catches to be found in this series of plays between F and Y.